Sally is new to the area, and she’s not only looking for love but also someone capable of helping out around the five-acre property she now calls home.

In a moment of desperation, she places an advertisement on the local online buy/swap/sell page: “Handyman Wanted; preferably single ;)”

Ryan is in an open relationship with the love of his life, Nathan. Both bi, they keep their relationship open to allow them to sleep with women if the opportunity arises, but also as a cover—Nate’s been hurt by homophobia before, and he fears the locals knowing the truth about his and Ryan’s relationship.

When Ryan and Sally meet, there is an instant attraction. It doesn’t take much to convince Sally to join the men for a threesome—just for fun. Though Ryan is keen to make things more permanent, it takes a near tragedy for Sally and Nate to move past their fears and discover their feelings for each other. 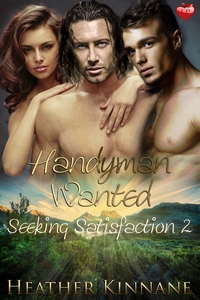 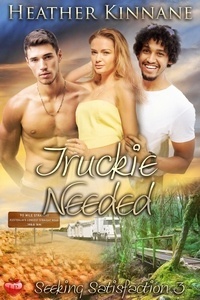 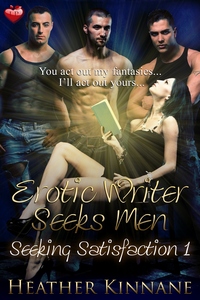 Sally watched them as Nate followed Ryan to kneel on the bed. Ryan was already hard, and Nate wasn’t too far behind. She dropped her robe and moved closer, reaching out to give Ryan’s cock a squeeze. Ryan tilted his hips forward, and Sally kept one hand on his cock while she reached out to do the same to Nate’s. She sat on the bed, leaning in to circle the top of Nate’s cock with her tongue. It was different to Ryan’s, thinner and longer, and when she closed her mouth around the head, he moaned. She bobbed up and down, stroking Ryan’s cock as she did so.
Soon Nate pulled away from Ryan to talk to Sally.

“Fuck. If you keep doing that I’m going to come, and I want to do that inside him.”

Sally raised an eyebrow and bobbed up and down once more before trailing her tongue along the underside of his cock as she released him.

“Better get onto it then,” she said with a grin.

Nate pushed Ryan back onto the bed and reached across to a bedside table to remove some lube and a condom.

“How about you keep him happy while I deal with this?”

Sally grinned and knelt beside Ryan, grasping his cock in one hand as she placed a trail of kisses across his chest, flicking a nipple with her tongue, before continuing down to circle his belly button, and kiss across his stomach until she reached his erection. She licked it from base to tip and back again, then wrapped her mouth around it from the side, repeating the action. Ryan groaned. Sally glanced up and caught his eye, before opening her throat to cover as much of his cock as she could.

Beside her, Nate had rolled the condom down his shaft and was applying lube to the end of it. He spread Ryan’s butt cheeks, wiping some more lube between them, and Sally felt a shiver travel Ryan’s body.

Nate inserted a finger up Ryan’s arse, and Ryan jolted, Sally releasing his cock from her mouth with a giggle.

“Gets him every time.” Nate laughed.

Sally repositioned herself, sitting for a moment so Nate could move in closer. She watched with interest as he spread Ryan’s legs, and she returned her hands to work Ryan’s cock, and Nate pressed the head of his against Ryan’s tight arsehole.

Sally fancied she saw Ryan’s eyes bulge as Nate applied a gentle pressure, but then somehow, she was aware of the moment the head of Nate’s cock passed Ryan’s sphincter. Ryan groaned in pleasure, and Sally felt a surge of lust.

“Can I ride him, too?” she asked Nate, not Ryan, not certain Ryan was still fully in the room with them. “Is that possible?”

“It might be a bit awkward in this position. But perhaps we could move.” Nate glanced at Ryan. “What do you think?”

Ryan’s eyes opened to peer at them both. “Fuck. Yes. Do it.”

Nate tightened his grip on Ryan’s thighs and pulled Ryan to the edge of the bed. Nate slid off, so his knees were resting on the carpet, but the bed was just the right height for him to continue to fuck Ryan’s arse.

Sally took another condom from the drawer and rolled it over Ryan’s erection.

She straddled him, carefully sliding her cunt down Ryan’s cock.

He closed his eyes and Sally lay her body down on his, kissing and nibbling his ear.

Behind her, Nate began to increase the speed of his thrusts. Sally pushed herself up on both arms and began to slide up and down on his cock, matching Nate’s speed and rhythm.

Suddenly she felt two hands on her waist, pulling her into a sitting position.

She sat up, and Nate’s hands traveled up either side of her stomach to cup her breasts.

She twisted her head and began to kiss him, as a groan tore from Ryan’s throat and he began to moan.

Both she and Nate turned their attention to him, pounding and riding him until they each came as well.

Sally leaned forward to drape herself over Ryan.

“Now that was hot,” she whispered, nibbling his lip.