After landing in the pound after being abandoned by yet another family, Ewan is convinced he's too old to be adopted out again. For a pet like him, the only fate left is to be put down. But when Sir Jiat—of the City Guard, no less—visits the pound, he goes straight to Ewan. Jiat prefers the more mature pets and treats Ewan better than he's ever been treated by any previous owner. Ewan sleeps at the foot of his master's bed, not on the floor or outside; he is given toys and other pets to play with and plenty of room to run; and he's fed on a schedule and eats very well. But Ewan's love for his master begins to change, to become something else, something more.

Plenty of pets have been killed over the years for acting on the feelings that Sir Jiat inspires, so he dares not express the desire building inside him. And yet, Ewan can't help but notice that Sir Jiat has begun to act differently as well, more doting, treating Ewan almost as an equal. So even though the thing he wants more than anything is also their society's greatest taboo, Ewan resolves that if he must die, he will die having felt, just once, the warmth of Sir Jiat's soft fur pressed against his bare naked skin.

I really liked this, and I have to admit, the cover had me super curious about the contents as well. One of my guilty pleasures is reading about pets and love slaves and the like, and the fact that they would both be put to death if it's found out that they're more than master and pet just adds a whole new level of danger. I had to finish this the day I bought it, and I was crying a little near the end ;_; though thankfully it does have a happy ending. I'm still wondering about whether or not I should feel weird when reading the sex scene since one of them is clearly very close to being an animal. Even Ewan calls the people in charge "beasts" at one point, but otherwise, the sex isn't really in your face and it's more of a sweet romance with Ewan coming out of his shell and learning to trust his new master, which was good for me. If this had been an erotic romance I might've been too uncomfortable, but it was just right for me, and I could definitely see myself reading this again

I'd had three masters in my life, and still, here I was, in the pound. I was nothing but a mutt, after all, and when one of the purebreeds they'd wanted so badly came up for sale, I was on the way out. Wouldn't want to risk having the pedigree of an expensive, beautiful bitch ruined by a mutt's seed. It didn't matter that Puan had adopted me when I was but four years old and trained me herself. I was her favorite stud until she'd landed one of the red-coated females that came from the High Breeders. Within two days, I was fifteen and foisted off on one of Puan's friends.

But Lienx wasn't as nice as Puan, and he didn't like the manners Puan had instilled in me. I wasn't allowed on the furniture. I wasn't to eat in the kitchen. I spent nights leashed to a small house outside in the yard. Lienx ruled his home with an iron fist, and when I misbehaved, I was thoroughly beaten. I learned quickly to remain invisible in Lienx's home, but then Lienx married, and his new wife, Moha, didn't like mutts. Within two weeks, Lienx had procured a purebreed. I was sent to the pound.

By the heavens, the pound. Cages. Left to wallow in our own filth because those in charge didn't want to bother. The food was tasteless. Sunlight was a treat once a week when we were taken out into the yards. Run. Play. Soak up the light until we were herded back into the large, hot buildings and locked away to be forgotten. Most pets came to the pound to die, and, at twenty-four, I resigned myself to such a fate. Two masters and well into my life, I wasn't the sort of pet a lovely master came looking for. Imagine my surprise when Kica came running through the pound, eager to find her newest pet.

Kica. Nine-years-old and the sweetest little girl. I think I loved her. She would play with me out in the yard, toss balls for me to run after, and she'd bring me scraps of her own meals. Little girls, though, grow up. For her sixteenth birthday, her father gifted her with a squealing, writhing purebreed with gorgeous, clear blue eyes. I saw her love for me die as the bawling mass in her arms demanded her attention. My heart broke when her father carted me back to the pound with not even a farewell kiss from Kica.

Thirty-one-years-old and back at the pound. I hated it. There was nothing I could do about it. I was nothing but a mutt, passed around. I would die here. I knew it in my very bones. There were younger, more beautiful pets to be found in the small cages, with bright eyes and unusual hair. I was plain. Forgettable. I was also tired. I didn't want to go home with someone else who would either abuse me or earn my trust and love only to betray me when something better, more expensive came along.

If I wore a collar and leash, I wanted it to mean something. I wanted to be wanted, needed. Heavens, perhaps even cherished, loved. Loved. I thought Kica had loved me. She'd said as much so many times as she'd brushed my hair, oiled my skin. But love, it seemed, was fickle. I was expected to give mine without pause, but my masters? They were allowed to gift it and take it back without any thought to my heart. Best to die in this sweltering hellhole of a building, thirsty and hungry and craving the sunlight, than to slowly wither as I bounced from home to home.

"What's down this hall?"

I couldn't help but lift my head as the question filtered down the dingy hallway. Was someone actually looking for an older pet? Surely not. Even if they were, I refused to allow my hopes to rise. There were two dozen other pets in this hall, all over the age of twenty-five and as tired as I was, that this person could potentially choose.

"Those are the older pets. Male. Ones that have been here more than once. You don't want any of them. They'll be taken care of when they've been here six months."

I hated that voice. Miab. He was an asshole. He liked to use the older female pets for copulation, which was—technically—against the law. Even pets knew that. We could be beaten, starved, denied water or baths, but we weren't supposed to be used sexually. Not that we weren't, but who believed a mongrel over an upstanding citizen? Miab, though, was a sick sonovabitch. He liked to hurt the females that he fucked, and none of us trusted him. I often wished to claw his eyes out.

"I want to see them. Age doesn't matter. None of your younger pets caught my attention. Maybe I need an older one."

Miab sighed, loud and annoyed. "All right. Come on."

Footsteps. None of us looked up. None of us moved. I don't think any of us wanted to go to another home. Six months, and then we'd be destroyed. Better than this indefinite hoping, and we wouldn't be a drain on the state's resources anymore.

"Eldest is there, Henri. Has had six homes. Likes to bite. He's forty-six." Miab walked past my cage and pointed to an end cage. "Youngest is Fredrick. He's twenty-seven. Had three homes. Last home surrendered him because he attempted to seduce their youngest daughter."

The visitor walked up and down the corridor, pausing at each cage, but I didn't hear anyone move. When his shadow fell over me, I didn't bother to look up. The shadow didn't move, though, and after a moment, the visitor spoke.

"I'd like to see this one is the playroom, please. I'd also like to read his file."

"Why was he brought here?"

"The file says..." Miab flipped through paperwork, but I still didn't look up. "He was the pet to Master Dierr's daughter, but he secured her a purebreed. Ewan was no longer needed." 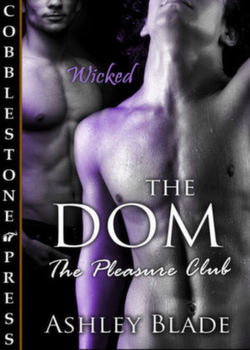 The Dom
Ashley Blade
In Shelf
$2.99
Tweets by
sirenbookstrand