Kink After Dinner. 8pm. Usual place. Wear the new purple basque – no knickers. Expect some SERIOUS (!) paddling. No touching until then. Master.

Beth hurriedly hides the note she has received so her family won’t see it.

Putting on her purple bustier and high heels as ordered, and covering up with a coat, she leaves her husband engrossed in his carpentry workshop to walk to a neighbour’s house. This is the home of swinging couple, Alistair and Helen, with whom she’s had several encounters over the past year. And this begins a wonderful evening of kink—bondage, spanking, paddling, handcuffs, and orgasm denial.

Then her husband turns up. 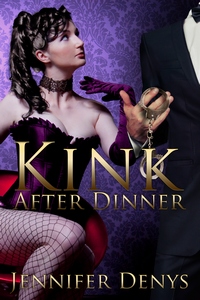 4 STARS Long and Short Reviews
Beth is a comfortable fifty-something mother of two, still married to the man she married right out of school. She gets an invitation from her Master, telling her to meet him at their swingers party later in the evening. This isn’t the first time she’s partied with the group, though they never get together as often as Beth would like. As she secretly prepares herself as her Master ordered, she wonders what new delight they’ll uncover together after dinner.

Readers interested or curious about swinging should find this short story interesting. I found the characters to be realistic and interesting. The sex was smoking hot – both with Beth’s Sir and her Master – and I enjoyed her camaraderie with Helen, a secondary character and another submissive. I was a little disappointed how Beth mentioned or dwelled on her being middle-aged even during intense parts of the sex. It drew me out of the story to be reminded of this fact while wicked, luscious things were being done to her. There were also a few small editing mistakes that also jarred me out of the lovely scenes. Overall though, this is a fun, sexy story that had me longing for some fun swinger parties myself.

Not for the faint of heart, this is a wonderful, sexy book filled with chemistry and smoking hot sex. I enjoyed Beth and her antics and will happily read more from this author.

More From Manor of Decadence

Kink after dinner–8pm
The usual place
Wear the new purple basque—no knickers
Expect some serious (!) paddling
No touching until then
Master

Beth Sheridan quickly glanced up from the note she was reading. She bit her lip as she looked around the breakfast table, fully expecting her family to be staring at her, as her nipples hardened in response to the suggestion in the note.

Both her husband and daughter were at the table with her. Amazingly, no one was looking in her direction, and she breathed shakily in relief. Her daughter was playing some game on her phone and her accountant husband, Tom, was reading his usual Saturday newspaper, half-turned away from her. She glared at the back of his dark head. Here she was planning a secret assignation and he wasn’t taking any interest. Instead, he was engrossed in the financial section of the paper.

Her inclination was to stuff it hurriedly back in her pocket, but that might look suspicious. Not that her family would think she was up to anything untoward. No, her son, Simon—now away at university studying media production—and her eighteen year old daughter, Elin, both thought she was a boring, middle-aged woman of fifty-two married to a boring, middle-aged man of the same age whom she had met at school. She had a very comfortable marriage.

She sighed and slowly folded the note she’d found on the doormat earlier.

Smiling secretively to herself, Beth placed the decadent evidence in the pocket of her apron.

“Hmm. No. An invitation actually.”

Oh, yes. An invitation to sin.

Tom snorted, startling Beth. “Not another one from the neighbours.”

Elin’s chin dropped, her green eyes shining with excitement. “What, the ones who’re swingers?”

Beth was horrified her baby knew about such goings-on. “What exactly do you know about those things, young lady?”

How has she found out?

“Elin, that’s rude.” Tom frowned at his daughter. Her husband had always been strict with the children, a job she found difficult herself.

Her daughter rolled her eyes. “Everyone knows the Hardings do wicked stuff like that.”

“And what they do is none of your business.” Tom’s voice held a note of stern authority.

Beth was still worried about exactly what Elin knew. “Alistair and Helen are very nice people. Anyhow, the invitation isn’t from them.” At least, not directly. She hoped that would divert her daughter’s attention.

But Elin just continued. “As if either of you would do anything so cool. You are both stuck-in- the-mud. Never go anywhere. Just work in a boring office or stay home and watch repeats of CSI. You probably can’t remember the last time you had sex.”

She gasped. If only her daughter knew. Beth might work as a personal assistant in a bank, but in her private life, things were anything but routine.

Before he got a chance to say anything more, Elin noisily flounced out of the room.

Her husband swore. He glanced over the top of his glasses at his wife and gave her an intense look. “I’ll certainly be glad when she goes off to university and we can have some peace and quiet.”

Beth nodded in reply. Tom loved the kids dearly, as did she, but they were looking forward to having the house to themselves. She could get her toy box out and not have to hide it away—Tom knew about her vibrators.

She was so engrossed in her thoughts Beth missed what Tom was asking. “Hello! Are you listening?”

“Sorry, darling. What did you say?”

“What was the invitation for, anyway?”

Beth was hard-pressed not to smile broadly, as she tried to avoid her husband’s probing eyes. “Just a reunion.”

Tom raised his eyebrows. “Oh, anyone I know?”

She shrugged, pretending nonchalance. “An old friend from school days. Can’t remember if you knew him or not, you were in a different house than me. He’s married these days.”

“Are you going to meet him?”

As she paused, trying to think of an appropriate response, Tom went back to his paper, shaking it to straighten it out, seemingly uninterested in her answer.

Elin came back in the room at that point, and Beth held her tongue. Her daughter hurried to the table, grabbed her phone, and rushed out, furiously texting while totally ignoring her parents.

“Where are you off to?” Tom asked his departing teenager, his head still buried in his newspaper.

“Staying over at Millie’s,” was the passing shot.

Beth shook her head wondering if anyone ever looked at each other anymore. They were almost like a reality television programme showing a normal, middle-class family, married for over two decades, settled, contented, and loving.

Tom did look up then to peer over the top of his glasses in the direction Elin had disappeared as he raised his voice, “How long will you be gone?”

Their daughter said something that was almost incoherent before the door slammed.

Her husband sighed, and looked at Beth. “Did you get that, my dear?”

Beth smiled at the long-suffering tone in his voice. “You’ll be pleased to know she is out until tomorrow evening.”

“Good. Peace and quiet at last.”

“I imagine you are going to work on that new model airplane I saw arrived in the post yesterday.”

“Hmm. Maybe. I also have a couple of other things I need to finish first.” Tom loved tinkering around with wood, quite frequently making things from scratch as well as kits he bought on-line. It wasn’t just model planes. He liked toys of all sorts.

Beth stood up to clear the table.

“You didn’t answer the question, my dear.”
As she lifted the teapot, Beth froze. Her hand was shaking and she quickly put the pot down again. “I’ve forgotten what it was.” She stuck her hands in the apron so he didn’t see.

“Are you going to meet your friends?”

She felt herself flush as he looked intently at her with his brown eyes. Her high colour was something that had annoyed her all her life. At least she could put it down to having a hot flush these days. “Possibly. Not sure I’ve got anything to wear.”

Tom was clearly getting bored with the conversation as he looked back at his newspaper once more. “I’m sure you’ll find something in your cavernous wardrobe.”

Despite her husband being deep in his paper, Beth still responded, her tone slightly sarcastic, “Hmm. I seem to recall a purple outfit. I might wear that.”