Obsessed by leather, Tyrone finally summons the courage to come out as a bottom. Eager to gain experience, he undergoes his initiation into the world of BDSM at the hands of several masters. One of these top men, the rough-edged Spike, stimulates and satisfies Tyrone beyond his wildest imaginings. But when Tyrone hopes for more from their relationship, the emotionally aloof Spike backs off—and introduces Tyrone to his friend, the wealthy and sophisticated Master Leopold. Loaned out to Master Leopold as a substitute slave, Tyrone discovers that he has the potential to be a top as well as a bottom. But, still in thrall to Spike, Tyrone wrestles with the question, “Is it possible for two men to be involved in a master-slave relationship, and still love each other?”

It was the dirtiest magazine Tryone had ever seen. Admittedly, he hadn’t seen all that many sex magazines. Most of his experience with pornography had involved watching DVDs, or video on demand on the Internet. There was something oddly retro about actually holding a printed publication in his hands and turning its pages, studying the lurid full-colour photos one by one.

Usually, when his latest smut fix showed up in his mailbox, he couldn’t wait to sample it. He’d open the shipping carton, extract the DVDs, tear off their cellophane wrappers, and insert a disc into his player. Then he’d spread a protective towel over the seat of his favourite leather-upholstered armchair, strip naked, and sit down. He’d sit back and make himself comfortable, making sure he had a bottle of his preferred gel lubricant and the remote control handy. All he had to do was aim the remote, thumb the play button, and he’d be good to go.

Watching a DVD for the first time was a lot like tricking with a guy for the first time—except that it was a hell of a lot simpler and more convenient. He could use the scene selection option to jump directly to a sex scene that looked as though it would be particularly good. And he could fast-forward through any comparatively dull parts of the action to get to the really hot stuff. It was too bad, Tyrone thought, that men didn’t come equipped with a fast-forward button. That would make sex a lot less complicated.

This time, however, he set the DVDs aside for the time being. The magazine wasn’t just wrapped in cellophane. It was discreetly wrapped in plain brown paper, as well. Tyrone freed it from its double protective sheath and inspected it eagerly.

He wasn’t disappointed. It was hot. Even hotter than he had anticipated, in fact. Of course, with a title like Leather Fuckers, he hadn’t expected some sort of kindergarten reading primer. This wasn’t “See Dick run. Run, Dick, run.” It was more like “See Dick get hard. Fuck, Dick, fuck.”

The magazine depicted two men about Tyrone’s own age, in their early twenties or thereabouts, both with enviably hard, muscular bodies—which they certainly weren’t shy about showing off.

One, with glossy black hair cut so short that it made him look almost like a Marine, was nude except for black leather motorcycle boots with spurs attached to the clunky heels, and a skimpy, matching black leather vest, carefully cut to show off his muscular torso to its maximum advantage.

His dick was hard, its thick swollen base and the two bull-like balls below it encircled by a snug-fitting metal ring, and the solid cock itself was one of the biggest Tyrone had ever seen. His mouth watered as he tried to imagine what that meat would feel and taste like shoved in his mouth. Or jammed down his throat. Or, better yet, plunged all the way up his ass in the course of a long, hard fuck!

You're So Unromantic 2
Roland Graeme
In Shelf
$5.99 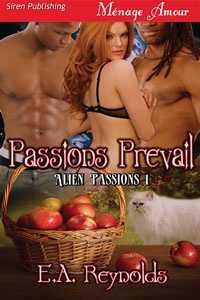 Handsome, Hung, and at Your Service (MM)
James Cox
In Shelf
$3.99
Tweets by
sirenbookstrand