Percival has been living an uncomplicated life. Until he agrees to pick up a pig-scented Addie Fontaine. She’s a woman who dreams of a family and of love. The kind of woman he often avoids. Addie, however, is not easy to forget. She’s pure, innocent, a virgin.

Addie Fontaine has been living in the convent for five years to hide, to stay away from her past. She has made a life with the sisters and dreams that one day she’ll join the order. But things change when she meets the tall, drool-worthy Percival Knight. His charm, touch, kisses, and a day at the lagoon quickly change her mind. 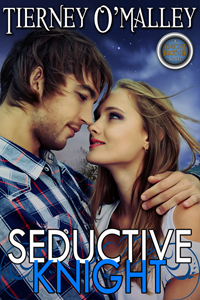 “I think Sister Addie is in the pen,” the nun with a mole in the middle of her forehead said.

“Maybe busy drowning the moles in the graveyard.”

“Probably chasing Liam the Goat with her rake.”

“I will surely miss her.”

“She put a dent on the cup the other day because she fell asleep and dropped it,” two nuns said simultaneously.

“I think I’ll miss her singing,” said the nun with bright brown eyes.

Everyone looked at each other, then started laughing.

Percival listened. Fuckin’ eh. This Addie must be like Teta, running around the convent terrorizing the nuns. He imagined Addie in her habit, drowning moles. The image was so funny, he laughed inwardly.

“Sisters,” Sister Kathleen said. “We all love Addie and her—”

Percival swore he heard a loud honking sound, but it was coming from inside the convent. “Is that a goose?”

The nuns began talking again at the same time. He couldn’t even tell who said what.

A goose. Fuck, that was definitely a goose making that sound…but inside the convent?

“Excuse us,” Sister Kathleen quickly said, then turned to talk to the others. “Please see what’s going on.”

The nuns disappeared in a hurry, leaving Percival alone in the kitchen with Sister Joanne.

“Don’t know what we’ll do without Addie. This place will be as quiet as a cemetery.”

Damn. I hope this Addie will not insist on bringing her goose pet. He was about to fish outhis cell phone in his pocket to send Bors a quick message when he heard an angry feminine voice yelling.

“Come back here, you beast. If I catch you, I’ll put you in the pot and make a stew out of you. Sister Joanne knows a good recipe for a beast like you.”

Sister Joanne looked at Percival. “I only cook chicken. Not pets. I swear.”

A loud crashing sound and more honking combined with the nuns’ voices, reached him. His eyes focused on the wide opened door. If he would go out there, he could…

A goose came flying in the kitchen, honking endlessly while in midair. It circled above Percival’s head as feathers floated in front of him.

Percival ducked. “Holy fuck!” He quickly backed away from the table where the goose landed and started walking, leaving muddy prints all over. “What the hell?”

“I had just washed that table,” Sister Joanne said and then sighed.

The goose honked, its neck moving back and forth. As if everything was normal, the darn bag of feathers proceeded to peck itself beneath the wings. His head went up though when a woman walked in wearing dirty blue overalls and black rain boots too big for her feet. She was covered in mud. The woman brought in with her the funky smell of stale food, outdoors, and…pig? Fuckin’ eh! What the hell is going on here?

“Don’t you dare move from there, Quacker. You are so so, so dead.” She put the emphasis on the last word while narrowing her eyes on the goose. Then, without looking at Percival, she said, “Hold this, will you please.”

The woman practically tossed something at him. Only having a second to react, he caught the little bundle, looked down, and found a pale pink piglet with a pink ribbon tied loosely around its neck looking back at him. Then the little pig smiled.

The woman who smelled like old garbage, froze while in the act of grabbing the goose, and looked at him. The nuns who had come back in the kitchen again gasped and made signs of the cross.

Percival realized his mistake, but it was too late. 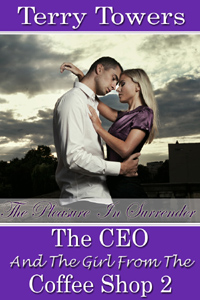 The CEO And The Girl From The Coffee Shop 2: The Pleasure In Surrender
Terry Towers
In Shelf
$2.99
Tweets by
sirenbookstrand