Let Me Heal You (MM)

Let Me Heal You (MM)

"The focus of this seventh book in the ‘Dragon Hearts’ series is yet another couple that is not having an easy time of it. The issues started more recently than Jason and Kraigan’s (who are still happily together after the last two books’ excitement), but Nathan and Tatsu are not exactly seeing eye to eye. Tatsu is still half in love with Kraigan, and has been insufferable ever since he took a bullet for him. Nathan is the only healer who will even touch this ill-mannered and aggressive dragon warrior. They can feel the physical attraction sizzle between them but they are blind to what else is going on. And they sure take their time waking up to smell the roses! Nathan is a dedicated healer, and normally isn’t let near any of the dragons. But then Tatsu becomes so impossible to deal with, he is the only one left ready to put up with him. This works well for Nathan, since he secretly really likes the gruff man, but when he finally gets close enough to touch, so to speak, Tatsu runs away and ignores him. Until Nathan finds out he must be part-shifter, since he is now pregnant and carrying Tatsu’s egg. Nathan has a very hard time putting up with Tatsu’s sudden protectiveness, even if it makes sense in light of the old-fashioned human-hating dragons still being pretty powerful. Nathan’s real problem is trying to figure out if he can deal with sharing a life with Tatsu, who is still in love with Kraigan. Tatsu may be a powerful dragon warrior and physically very strong, but he has issues in the emotional department. He keeps telling himself there is no hope for him and Kraigan, now that the other dragon is mated, but he can’t quite get himself to believe it. On the other hand, he does feel attracted to Nathan, just for some fun and games, of course… And then there is the fact he will have a child with Nathan. That means he feels entitled to take over as Nathan’s protector, but he is too dense to understand what else is going on. I wanted to grab him by the shoulders and shake him until he wakes up. If you like stories about stubborn warriors who control their bodies but can’t understand their own emotions, if you believe two stubborn men who fight all the time can learn to love each other, and if you’re looking for a read that is as entertaining as it is hot, then you will probably like this novella." -- Serena Yates, Rainbow Book Reviews 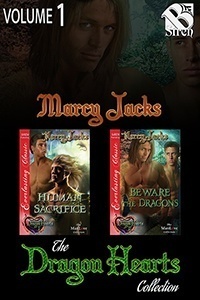 Two years later, Nathan’s own debts were so great that his village tied him to a stake and sacrificed him to the dragons.

Nathan sucked in a breath. His eyes burned just thinking about it. He wiped them first then scrubbed his fists over his eyes just to keep them at bay for even longer.

He hadn’t thought about these things in a long time, and now he realized he might be going the same way his father did.

He felt so young. He didn’t want to die.

What would he tell Tatsu? Even worse, would Tatsu need to know? Did he care? They hadn’t spoken to each other since that night...

When the door clicked open again, Nathan jumped. There was no need as Cormoran stepped inside. He was followed by Lily and Orla, two dragon females and Cormoran’s best assistants.

Nathan felt himself on the verge of a panic attack. He knew the symptoms and could feel it on its way. His heartbeat quickened, and a sort of tunnel vision took over.

Even though he was aware of these things happening, it was still difficult to calm his own breathing, to get control again. Control was what he needed when it came time for this.

“Nathan, hey, you’re okay, don’t worry,” Orla said, by far one of the more kinder assistants to the humans.

Nathan liked her. She put her hand on his shoulder and rubbed his back with soothing circles using the other. “You’re all right. You don’t have to panic.”

He didn’t even care that she actually was talking to him like a child. He wanted to be coddled if he was going to find out that he was dying.

He would prefer it if Tatsu was the one who was here coddling him, but then again, he supposed he couldn’t have everything he wanted in this scenario.

“What’s happening to me? What is it?” Nathan asked, looking between all three people in the examination room with him.

His mind started to work again. Not contagious, otherwise Cormoran would have come in here wearing a mask, so would Orla and Lily. That was protocol, so it had to be something that was genetic to his own blood.

Cormoran looked down at the clipboard of Nathan’s symptoms, everything he’d told the other man that he was feeling. Nausea, a lack of energy, vomiting, and just being so damned tired all of the time.

He supposed that was the same as a lack of energy, but this felt a little more extreme. Something was sucking the life right out of him, and the vomiting was the absolute worst. Nathan had even been trying to check for blood, but he was so damned woozy whenever it happened that he could hardly see straight.

Also, the sight of his own puke made him want to retch again, so he gave up.

“Nathan, I know we spoke about your family history, but are you quite certain that you never knew your mother?”

He didn’t understand the question. “I told you she died in childbirth.”

That’s what his father had said, and he was going to have to stick with that because there was certainly no way for him to ask the man now if that was actually what had happened, but he also had no reason to think that his father hadn’t been telling the truth either.

Cormoran looked down at his notes again and then back up at Nathan.

“Well, no, actually. Father never spoke about her too often. He said it was painful.”

“You don’t know your mother’s name?” Lily asked the question as though it was a sad one, as though she felt sorry for him for not having even that much information about his family.

Nathan wasn’t altogether sure if he liked that sort of pity coming from her. He’d never thought it to be sad at all. He’d never questioned it. He’d asked his father once or twice before, and the man had either said he would speak to Nathan about it later or that it was too difficult to talk about, other than she was dead and would not be returning.

Nathan and his father had been too busy trying to survive harsh winters for him to spend much time thinking about it. When the times were good, they were good enough that he hadn’t put much thought into it then either.

“What does she have to do with this?” Nathan asked. “Am I sick? What do I have? My symptoms are the same as my father’s. I told you that.”

“Yes, you did,” Cormoran said. “A lack of energy, a feeling of weakness and vomiting. But unlike him, you claimed to not have seen any blood.”

Cormoran nodded, accepting that as his answer before he turned his attention back to Orla and Lily. “I brought in these two ladies to help me explain. Females are usually the ones to give news such as this.”

“What news? I never heard of this policy,” Nathan said, looking between both women, suddenly incredibly suspicious of both of them.

Orla continued to smile at him, still rubbing his back in those soothing circles, but this time, the soft smile on her lips and the twinkle in her eyes suggested she was not feeling sorry for him anymore.

“Nathan, Cormoran examined you, and he asked Lily and me for our opinion on the matter, and we all came to the same conclusion.”

Nathan was damn near edging himself off of the examination table. He was that eager to hear what was going to be said.

“Well,” Lily said, “we’ve just discovered that you have some dragon blood inside of you. One of your symptoms was that your stomach was beginning to feel tight, and everything else coincides with a pregnancy.”

“My...what?” Nathan asked, and he looked between all three dragons in the room.

“You like that?” Tatsu asked, already knowing the answer as he rocked Nathan back and forth on his cock.

They were back in the water, and Tatsu was sitting on the bench in the water, his hands on Nathan’s hips as he watched the man cant his hips and bob up and down.

The sight he made was fucking ecstasy.

Nathan’s hands came up and out of the water, cupping the back of Tatsu’s neck and sending water droplets trickling down his back before they returned to the spring.

“We should...we should have thought of this a long time ago,” Nathan said, still moving up and down, his pace quick. He was in a hurry to give himself another orgasm.

Tatsu was perfectly fine with that. That was exactly what he wanted, too. He sighed and bit down on his lower lip as Nathan pressed his ass down hard on his cock. Tatsu took him deeper before rolling his hips.

Nathan might not have admitted it yet, but Tatsu could tell that the man was in love with him, and why hadn’t he been able to see before just what a gift that was?

Tatsu reached blindly for Nathan’s cock. He couldn’t see through the water, as steaming as it was, and even if he could, there was no way he was going to take his eyes away from Nathan’s face. This was the only thing that Tatsu ever wanted to see.

Nathan threw his head back, exposing the long column of his throat, just ripe and ready for Tatsu’s mouth.

He leaned in and kissed the man, licking him, tasting the salty flavor of his skin and sweat that clung to him in this hot spring.

He seemed to say that a lot when he was getting off. Then his hands were moving around Tatsu’s body to his nipples, tweaking them and pinching before Nathan let his palms slide over Tatsu’s chest. As he did so, his bouncing became stronger, faster. The man’s asshole tightened around Tatsu’s cock, and he knew the man was almost there, almost ready.

“Just come already, do it,” Tatsu said, slowing his strokes and pressing his thumb against the slit of Nathan’s cock.

He would never understand why humans didn’t have the same bulb at the end that dragons had, but it was still just as sensitive apparently. Nathan’s eyes flew wide as he arched his spine backward. His choked cry was a sound unlike anything Tatsu had ever heard, as though he was trying to hold it back but couldn’t quite do that either.

And even in the hot spring, Tatsu could feel the warmth of Nathan’s seed as it rushed through the water and spilled against Tatsu’s chest before dispersing.