Song of the Wolf

Rionon - hunter, warrior, he wanders the dark trails, guilt, sorrow and anger his lone companions. He has become a loner, a shadow who seeks the peace that can only be found in the darkest reaches of the forest. But when his peace is disturbed by humans and his past returns; vengeance and death clearly marked with his demise, he must choose a path and change a life he never knew existed.

Jayden LeFey has always trusted the wrong ones. Drawn to the bad boys, the downtrodden, she has a gift at finding promise in all their lying eyes. But Rionon's difference is savage and a dark beast dwells within him. So why isn't she afraid? Because all her life she's wanted nothing more than to belong - and something in Rionon feels like coming home. 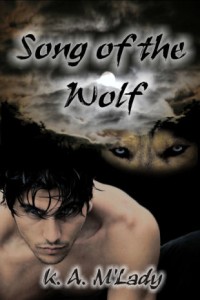 Song of the Wolf

Jayden blinked several times, trying to focus on what it was she thought she was seeing. Her confused mind attempted to wrap itself around the image that stood before her, yet the vision was too surreal.
He appeared to be a man, and yet he was anything but human.
His image swirled through her mind as his form became that of a monster, his clawed hands and furred chest glowing in the brilliance of moonlight. Somehow she still could see the outline of a man's perfect physique shimmering like a shadow beneath the monster's form. Somehow he existed both as man and beast. And yet, he was neither.
He stood almost seven feet tall, his body contorted, caught between worlds. It was amazing and horrible and she was too stunned to comprehend it. Too amazed to scream.
Thick black fur ran in patches down the washboard of chest and abs. His arms and hands were twice the size of a normal man's, with long clawed nails that glistened with blood in the moonlight. His long dark hair surrounded a face frozen as one with his beast.
Blood dripped from his jaw, running in crimson rivulets down his chest as he snarled at her from above, gums drawn back over the points of sharp canines. But the thing that frightened her most was the way that he watched her, hunger and need a dark mixture in his pale silver eyes.
With her breath frozen in her lungs, Jayden watched in shocked awe as the creature stalked towards her on silent feet. The ground vibrated with the force of his power-the world bending to his will.
Suddenly the creature crouched before her, folding its large frame above her. The heat of his body engulfed her as she lay on the ground beneath him, shaking with fear. Paralyzed by the drugs she'd been given, overwhelmed by wonder, she held her breath as he leaned into her.
Ever so slowly, the creature sniffed up her body, scenting her, his breath hot on her exposed flesh, misting in cool night air. He stopped along her neck and jaw line before turning his cold silver eyes upon her.
She could almost read the wonder and interest that his bright silver eyes portrayed as he gazed deeply into her eyes. All the while she was screaming inside, praying as loud as she could. Praying he wouldn't kill her. Pleading with God to let her live.
Your God has no power here, she swore she heard him say.
Jayden's breath left her in a whoosh of disbelief. How…? How could he speak to me? she questioned frantically, her mind awash in a mixture of uncertainty and startled panic. She knew she hadn't seen his mouth move.
Our ways are the old ways. Your human life means nothing to a people who have walked this earth for a millennium. A people with abilities beyond your comprehension. Your God must bow before their laws. The voice rolling through her mind was deep and rich like the earth, as dark and mysterious as time itself. It was luxurious and hypnotic, and her body pulsed with uncertainty and desire. She couldn't believe what she was hearing or seeing. But she wanted him to keep talking. Wanted to feel each nuance rumble through her bones.
What are you? she thought hesitantly, looking into the depth of his tumultuous silver eyes. For some strange reason, she wasn't afraid of him. She needed to know more.
I am he who walks with the moon. He who follows the ebb and flow of the night, the creature said, bringing his muzzle close along her body and scenting a line from her hair back down to the pulse of her neck.

Quite the Catch (MF)
Lee Ann Sontheimer Murphy
In Shelf
$3.99
Tweets by
sirenbookstrand