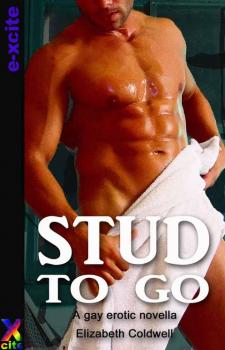 Did this man realise he was putting on a show for his neighbours, as he went over to the bed and lay down among a litter of throw pillows? Were his slow, deliberate movements intentional as he reached for a bottle on the nightstand, squeezing out some kind of lotion into his palm? All I knew, as he started to stroke his cock almost absent-mindedly, was that my jeans were suddenly far too tight, and I needed to be free of their confines before they strangled the life out of my hard-on. Slipping back into my bedroom, I stripped down to my own underwear, my eyes never leaving the stranger as his hand moved with more purpose along his length. His cock was at full hardness now, and I itched to pleasure it with my own fingers – or, better yet, my tongue.
Almost without realising what I was doing, I gripped my cock through my shorts, savouring the feel of it, hot and eager, in my hand. Already, a drop of wetness was soaking the cotton, and I couldn’t have been much less excited than the guy I was watching. If only I could be down on my knees between his spread thighs, mouth crammed full of his meaty black dick, worshipping it with my lips and tongue. Though I scarcely wanted to admit it to myself, since the moment I’d first received Edwin’s bizarre business proposal, I’d been unable to think of anything but sex. It’s a common enough problem when you’re not getting any, but now the need to come was so urgent, so all-consuming I had to do something about it.
Dropping my shorts to the floor, not caring that if the guy across the canal was visible to me, I might just as easily have an audience, I started to wank myself. Easing my foreskin slowly back and forth, I revelled in the sweetness of the sensation. No one knows the perfect way to bring you off better than you do, and my fingers moved in the fast, jerking rhythm that never fails to have me coming in moments. In other circumstances, I might have taken my time, put on a measured performance like the one I’d initially been watching, but I was just too eager. When I’d lost my job, my libido had taken a severe nosedive. I had plenty of time to spend pleasuring myself, but I lacked the desire. Now, I was hornier than I’d been in ages, driven by nothing more than base, frantic lust. A voyeuristic streak I’d never known I’d possessed had kicked in hard, and with the help of the spectacular show taking place in the apartment opposite, I knew it wouldn’t be long before I lost my load.
As I continued to watch, a second man entered the bedroom, tall, lean and strawberry blond. The towel wrapped round his waist suggested he’d just emerged from the shower. Climbing on to the bed, he whipped away the towel to reveal one of the biggest cocks I’d ever seen, even in its limp state. Groaning, experiencing a sharp pang of envy as the black guy took hold of his lover’s dick with his free hand, I tugged myself even more frantically. They kissed, the overwhelming passion they felt for each other obvious on their faces, and as their bodies twined together, I surrendered all control and shot my lot, jets of creamy come spurting out to spatter against the full-length window.
Weak in the knees from the strength of my climax, I slumped to the carpet. The half-drunk bottle of beer still stood on the balcony table. I was about to slip back into my shorts and retrieve it when I heard a sharp jangling noise coming from somewhere in the apartment. Head still fuddled with bliss, it took me a moment to realise it was my mobile phone. I followed the sound through to the kitchen, where the phone lay charging on the counter. Answering it, I croaked, ‘Hello?’
‘Ben, it’s Marliese. You sound out of breath. Did I interrupt you in the middle of something?’ She chuckled, low and throaty.
Only spying on two of the hottest guys I’ve seen in ages making out, I wanted to tell her. I suspected the idea would excite her just as much as it had me. ‘No, I was just out on my balcony and I ran inside when I heard the phone ringing.’