The Saving of Isabelle (MF)

Tragedy strikes. Isabelle is kidnapped and enslaved by human traffickers, then taken deep into the desert to be sold at auction. Relinquishing all hope of rescue, she is prepared for sale to the highest bidder.

Hunter sets off on a perilous journey, determined to save his wife, but will he get to her in time, or will Isabelle be forever lost? 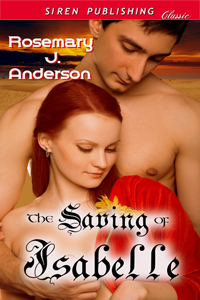 The Saving of Isabelle (MF)

The car drew to a halt and Isabelle jerked awake, gazing with unseeing eyes into the blackness through the dirty glass of the window.

Frowning, she pushed at the handle and almost fell from the vehicle.

“It’s the desert!” Isabelle screeched, her face red with indignation, sweat beading her brow and upper lip. “You’ve brought me to the desert.”

Hunter, looking around at the desert camp before him, grinned in wry amusement in the face of Isabelle’s discontentment.

“Where else would I take you? The dig site is here.” Hunter had already worked out Isabelle’s sudden about-face and tried not to laugh out loud as he looked at her in feigned puzzlement.

“A dig!” she screeched again, hate blazing in her eyes. “But I thought that we were going to Monaco or the Bahamas.”

“Whatever made you think that?”

“You did,” she accused, refusing to look him in the eyes. “Well I—well I assumed—I thought we were going on a honeymoon.”

“Well, it can be a honeymoon if you want it to be, Isabelle, but for us it will be a working one.”

Isabelle gazed around her, noting the dilapidated trailers, the tents nearby, the large, bloated water containers with a dented galvanised bucket beside them, and the piles of boxes and equipment.

“A working one?” she screamed at Hunter’s receding back as he strode ahead of her toward one of the trailers. “What do you mean? I’m rich! I don’t work! Never have and never will.”

Hunter turned from opening the door to the trailer. “If you want to eat, Isabelle, you work. There are no hangers-on out here, so I suggest you get unpacked and find us something for supper. I’m going to look at the equipment.” He threw the suitcase on the floor and glanced casually around. “And the place looks like it could do with a cleanup as well. The last occupant wasn’t too fussy about hygiene and you don’t want to get the runs, not out here.” He looked at her dumbfounded face. “No toilet paper,” he whispered, grinning from ear to ear, his eyes full of mischief.

Isabelle stared after him. She couldn’t believe it. He expected her to work! Clean up the trailer and God knows what else as well. She could feel tears of disappointment and rage building inside her but she wouldn’t, couldn’t let them fall, let him win. Whatever had made her think she could trust him? And those feelings she had about him, well, she was right to dismiss them. He was just like all the other men that had been in her life—he wasn’t worthy. Scrambling with difficulty up the three steps into the trailer, she fumed in anger as the seam in her pretty blue dress ripped and she went over on an ankle.

Looking around the inside, she couldn’t help it. A few tears did fall. The place was a mess, the air was hot and stagnant, and there were flies as big as crows. The remains of some kind of meal was in a charred saucepan on the small gas stove, dirty dishes had been left in the miniature sink, and there were two overflowing waste bins. The bed—if it could be called a bed—was wooden and narrow and fixed on some kind of hinge that came out of the wall, and the thin sheets thrown over it were dirty and smelt. A miniature table and two diminutive benches were situated under the window that was framed by dirty, red-checked gingham, and a lumpy futon in the centre of the room. On further investigation she found a minuscule bathroom that at first glance looked like a cupboard. Inside a grubby chemical toilet had pride of place, and a bucket full of dirty-looking water stood to one side. This she took to be the washbasin, although she did in fact note with some relief that there was some toilet tissue.

It was the sight of the toilet that finally broke her, and she burst into tears of self-pity quickly followed by unmitigated rage. She couldn’t believe that she had been conned into thinking Hunter was all right and that she could endure this marriage. All Hunter wanted was a slave someone to cook and clean for him on his godforsaken digs. Clenching her teeth, her face red with the force of her emotions, she screeched in anger, stamping her feet and clenching her fists. Taking her temper out on anything close at hand, she picked up a nearby knife and repeatedly stabbed a convenient chopping board, wishing it was Hunter’s head she was attacking. Cups, pans, and an overflowing ashtray, thrown around the room, gave her a smug sense of satisfaction, as did hearing them crash against the wall, their contents spilling messily onto the already filthy floor. She’d show him. There was no way she was going to do his bidding. She wasn’t his slave, and he could clean up his own damn mess.

Hesitating for a moment, Hunter took in the shaking vulnerability of her lower lip and the haunted pleading in her eyes. Hearing the little catch in her breath he made a decision he hoped he wouldn’t regret in the morning, and kicking off his shoes, pulled back the quilt and slipped in beside her. Snuggling up to him, seeking the warm comfort of his body, Isabelle curved her arm around his waist and settled her head on his chest.

Hunter checked his watch, three thirty. He eased his cramped arm from under her shoulders and her eyes fluttered open.

“Well, you were rather insistent.” He gave a slight, self-deprecating grin.

Fully awake, the mask came up, her lashes dropping to form crescents on her pale cheeks, effectively camouflaging her thoughts. Turning more toward him, her smile became sultry as she inserted a leg between his, whilst her fingers crept persistently to the open buttons of his shirt. Sliding her hand over his chest, her nails grazed the gathering of dark hair.

“Hunter,” she breathed again, her voice low and husky.

“Isabelle, stop it,” he ground out between clenched teeth, disappointment at her about-face tightening his jaw.

Swiftly capturing her other hand as it cupped his rising member and slowly began lowering the zip that protected his cock, he growled deeply in his throat.

Whipping her onto her back with a speed that took her breath away, Hunter raised her hands above her head.

“Don’t say I didn’t warn you.” He growled before his lips closed over hers in a hard, hot kiss.

“Hunter,” Isabelle breathed triumphantly as his mouth trailed a blistering path down her neck and across her shoulders. Opening her robe, he sought out the tantalising mounds of her breasts, the nipples puckered and hard.

Closing his mouth over one nipple had her writhing in pleasure. Suckling, he drew it deeper and deeper in, his hands squeezing and caressing its twin.

A bit of manoeuvring had them naked, breast to breast and hip to hip. Opening her legs invitingly, Isabelle displayed herself eagerly for his titillation. “Go on, Hunter. Fuck me and fuck me hard.”

Moving across her body, Hunter kissed and lapped at her soft flesh, and the rough feel of his tongue as it found the small indent of her belly button had her frenziedly pushing his head farther down until he found her feminine mound, the soft curls shaved to form a heart, the lips already unlocked, ready for his possession.

Hands on her thighs, he spread them wider, stroking her clitoris with his tongue as three of his fingers pushed their way into her slick pussy, creating a flood of desire.

Crying out, Isabelle writhed in response to his favours, her need building, the ache intensifying, burning for his ultimate possession. Grabbing his hair, her clutching hands ground his face harder against her clit. His fingers moved faster, becoming pistons of delight as they worked in and out of her pussy, the sucking sounds filling the air along with her moans of enjoyment. Her breath caught. The orgasm was coming fast, suddenly. Internal muscles contracting around his thrusting fingers sent sensations rippling up over her pelvis to run deeply into her womb, and with a final cry, she reached the pinnacle.

Withdrawing his fingers, Hunter lifted her limp, satisfied body and, not allowing her time to rest, he proceeded to sweep her back to paradise. Arranging her unresistingly over his hips, he impaled her onto his cock, sheathing himself deep inside her. Her mouth opened on a soft oh! He was in so deep. She felt his size and his width stretching her to accommodate his cock. Burning with renewed desire, she hungrily began rocking, coming forward, almost expelling him before bouncing back to drive his entire cock inside her. Her hips rotating, she ground against him, crying in small, broken breaths, “Screw me, Hunter, fuck me and screw me.”

His hands on her hips secured her into position as she wildly rode him. Feeling powerful and in control, she cried out, exhilarated, liberated.

The air grew hot and heavy, the scent of sex erotically satisfying, but she was beginning to tire, her energy expended as a result of incredible passion.

Hoisting Isabelle off his penis, Hunter laid her gently on the hot, creased sheet and, lifting her legs over his shoulders, gazed intensely into her eyes and penetrated her ferociously with his cock.