A Home for Three (MFM)

Heat Rating: Sextreme
Word Count: 34,899
9 Ratings (4.3)
Menage a Trois/Quatre Science Fiction
[Siren Menage Everlasting: Erotic Menage a Trois Science Fiction Romance, M/F/M, HEA]
Andrea’s attraction to Coreg has PJ wondering if he’s willing to share. He only wants her to be happy and is willing to do just about anything to make that happen. Does that include accepting Coreg into their life? If that is what it takes to be a family, PJ will welcome the other man.
Andrea is familiar with PJ and comfortable with him as her man. Her attraction to Coreg is sudden and scary. He brings her back her beloved sewing machine from the wreckage of their ship so is it gratitude or is she already half way in love with this strange alien?
Coreg knows that Andrea is the female for him. He sees something in her that warms his soul when he never thought he’d have a female of his own. Sharing her with the human male isn’t an issue for him. He’ll do anything to be a part of her life, including working with the human to make her happy.
Note: This book contains double penetration.
A Siren Erotic Romance
Marla Monroe is a Siren-exclusive author.

A Home for Three (MFM)

More From Lost in Space

An enormous Levassisan loomed over her as she wobbled on the walkway after the transport had passed. He had to be nearly seven feet tall and was built like a linebacker from Earth’s football sports.

“Are you okay? Were you injured?” His silver eyes and nearly white hair startled her.

If she lived there the rest of her life she would never get used to their metallic colors and nearly matching hair. Like all Levassisans, this one wore his hair braided down his back.

“I’m fine. Thank you for the warning. I wasn’t paying attention.”

“You shouldn’t be out on your own. You could get hurt.”

“I’m usually not so scatterbrained, but your homes are so beautiful that I forget myself.” She stuck out her hand. “I’m Andrea. Thank you again.”

“I’m called Coreg. It is my pleasure to make your acquaintance. Please allow me to see you back to your home. Who is your protector?”

It wasn’t lost on her that he didn’t shake her hand. She’d forgotten how formal they were there.

“I don’t have a protector. I don’t need one.” Andrea shook her head. “I don’t think I’ll ever get used to this way of life. You assure us that no one would harm us here, yet you feel that we need someone to watch over us. I don’t get it.”

“No one would willingly harm you, but many of our males are anxious for a female and might approach you to convince you to accept them as your male. It is safer for you to always be in the company of a protector when you’re out in the city.” Coreg offered his arm. “Where did you want to go? I will escort you.”

“Thank you, but I don’t need an escort. I was just exploring. I wanted to see some of the shops and just get an overall look at the city.”

“Then I will be your protector while you are doing that. Allow me to show you our home.” He waited until Andrea finally laid her hand on his forearm.

“First, I’ll take you to the street where all of our major shopping is done. Have you been to the city’s center where most Levassisans eat and commune?”

“Yes. I’ve been there several times with friends.”

“I trust that there was a male to escort you when you went,” he said.

“Well, yes. I guess there was. Several of our men went with us.”

“And are any of these males your males?” he asked.

“My males? Oh, you mean am I married to any of them. No. There is one that is special to me though, PJ. He’s fun and easy going. I like him. He was one of the men I was supposed to be with when we were going to the second planet to live.”

“PJ, that is an odd name. Those are initials if I am interpreting them correctly. Why is he not with you?”

“His real name is Peter James but everyone calls him PJ. He’s working in one of your facilities helping with maintenance or something.”

“Who is the other male of your family unit?”

“There isn’t one. He died during the crash. I hate that he died, but I didn’t really know him.” Andrea shrugged.

“I’m sorry you lost the other part of your unit. Have you chosen another?” he asked.

Andrea wasn’t sure why he was so interested, but it made her uncomfortable. She changed the subject.

“Is it true that you don’t use money here?” she asked.

“That is correct. We barter for things we want but for the things we really need, they are free for our use. Everyone here works for the common good of the whole. It is our way.”

“It seems so simple, but it would never have worked on Earth.”

“It is simple, and it does work here.”

Coreg led her to a shop that held yards of lovely fabrics. She ooed and ahhed over the pretty floral colors and sturdy samples that had to be more for workers than for a woman. It made her wonder who wore the pretty colors.

“If there are so few women here, why are there so many nice colors and prints?” she asked.

“Many of our leaders wear the brighter colors as a sign of their station. Also, now that there are females here in Levastah, they are displaying more of them for you to choose from. We’re all hoping you’ll adapt to them and enjoy their superior workmanship.” Coreg held up a bright yellow next to her face. “This would look amazing on you with your sun kissed skin.”

Andrea could feel heat travel up her neck into her cheeks. He was flirting with her. She wasn’t sure how to react.

I didn’t know they knew how to flirt. Usually they seem so stoic and stern.

Andrea couldn’t help but moan at the gentle touch of his tongue. She arched toward him almost without thought. She wanted more. She needed to feel both of them touching her.

As if understanding her need, PJ molded one breast in his hand and covered as much as he could with his mouth, then he pulled back and sucked on just the nipple. Coreg took his lead to do the same. When he sucked on her nipple alongside PJ, Andrea nearly came instantly. Two mouths on her at one time were almost too much. She groaned and writhed between them. It felt so good, so right.

“She’s perfect, PJ. How did I ever get so blessed to have her in my life?”

“She’s a special woman, Coreg. I for one, will do everything I can to make her happy.”

Andrea ran her hands through PJ’s hair and tugged on Coreg’s braid as they ravished her breasts. She could tell that her pussy was wet. It fluttered as if aching for something to fill it. She prayed they would do that soon. Her body was primed, all ready to come. She knew both men were amazing with their mouths, but she needed more than oral sex. She wanted their cocks inside of her.

“Please. I need you. I need you both. Don’t play with me.” Andrea pulled at their hair to get them off her breasts. “You can play with them later. They aren’t going anywhere.”

PJ chuckled. “I should hope not. What do you want, babe?”

“One of you inside of me. I’m desperate,” she admitted.

“I’ve heard of this but have never experienced it,” Coreg said.

“You can watch if you have the energy once you’re inside of her. Believe me, you won’t be able to think about anything else, much less watch me.”

“You are sure you are ready for me, little one?”

Andrea took his hand in hers then slid it down her abdomen to her sopping wet pussy. His eyes grew dark once more.

“You’re so wet. That is good. It will help me enter you.”

PJ chuckled. “Better get to it.”

Coreg climbed over her, dwarfing her as he did. She’d almost forgotten how tall he was until he stood on all fours staring down at her. She wasn’t sure how she’d be able to take care of PJ with his head over hers nearly touching the headboard. Then he lifted her legs and sat back with one of her legs over an arm and the other hand grasping his cock. He pumped the shaft a few times as if testing his readiness, then rubbed the head of it against her slick opening.

“I wanted to taste you again, little one, but you are not giving me the chance.”

“Next time, Coreg. I need you too much this time,” she said.

Coreg slowly entered her, seeming to split her pussy open with his broad cock. Andrea could only thank God that she was so wet. He stretched her almost more than she could handle as he pushed in then pulled out slightly, only to delve deeper with each thrust of his dick. Andrea moaned as he moved in and out of her hot cunt. He’d entered her as far as he could go, bottoming out at her cervix before fully seating himself inside of her.

“Great gods. I never knew it would feel this good. She’s like a hot, wet fist squeezing my cock,” Coreg said between clenched teeth. “I will not last long. I’m already so close to my completion.”

While Coreg had been breaching her body, PJ had been rubbing his dick against her lips until she’d opened them for him. Now he was slowly pumping in and out of her mouth. She rubbed the bottom of his cock with her tongue as he entered her then retreated. Andrea couldn’t believe that they were actually doing it. They were consummating their relationship, sealing their destiny. It felt right. Perfect.

PJ started increasing his pace even as Coreg pounded in and out of her with her legs over his arms. She felt her climax just out of reach as the two men tunneled in and out of her body. Coreg began to lose control, bumping against her cervix as he did. That little bite of pain was all she needed to climax. Her orgasm took her screaming around PJ’s cock. He groaned and emptied his load in her mouth even as Coreg held still deep inside of her with his release.

When PJ pulled back, it was to collapse against the headboard. Coreg didn’t move, he just knelt between her legs with his softening dick still deep inside of her. His eyes were closed, and his head thrown back. He looked like the statue of a satisfied man. 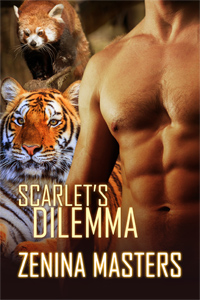