Submissive Kyle gets an early Christmas present from Ryan and Amber, his Master and Mistress. But when that present turns out to be a sister-slave, Kyle wonders about his place in this new dynamic. 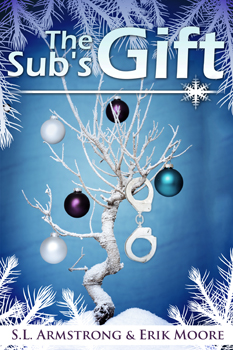 Kyle couldn't see anything, but he didn't mind. He'd always loved this blindfold. It wasn't flimsy, and it didn't let him peek through the bottom. It fit his face perfectly, which was why Amber had bought it. He could hear her moving around somewhere nearby, her heels clacking on the hardwood floor, perfectly in time with the soft Christmas music coming from the condo's sound system. He wasn't allowed to wear shoes on the floor, but Amber did as she liked. The scent of Amber's favorite perfume mixed with the cinnamon oil on the pine cone wreath, wrapping him in comfort and familiarity.

His knees were beginning to ache from kneeling so long on the floor, and his shoulders were tense from his hands being bound tightly behind him. Usually, he didn't need to be tied up, but the moment Ryan had come at him with the blindfold, he'd been hard, his hands straying. He acknowledged those minor pains, accepted them and drew them into himself. What pleased Amber and Ryan pleased him, and so he reveled in his position, sensing the approval in their eyes without needing to see it.

A hand—Amber's, judging by the long nails and slender fingers—snaked down his chest and pinched his left nipple hard enough to make him gasp. Amber's perfume suddenly filled his nostrils, and Kyle felt her breath against his ear. "Merry Christmas, pet," she whispered, and then immediately bit down on his earlobe.

Kyle hissed and trembled. He began to reply, but another scent invaded his space, a darker musk that could only be Ryan. Knowing what came next, Kyle opened his mouth wider and accepted the length of Ryan's cock as it slid past his lips. He played his tongue across the soft, taut skin, tasting the sweat and the lingering tang of Amber's juices. So, they'd fucked while he was out getting the things for dinner? That explained why they'd been so frisky when he returned and barely let him through the door before pouncing him. Kyle smiled around Ryan's cock, amazed as always at the way their desire for each other translated so easily into a hunger for him.

Ryan's hands fisted in Kyle's hair as he began to mercilessly fuck Kyle's mouth. He buried his cock again and again, so fast and hard and deep that Kyle thought it would be a wonder if he didn't have bruises on his chin from Ryan's balls slamming into it. He took quick breaths when he could, but even so, he was gasping by the time Ryan finally relented. He knew he must look a mess—tears squeezing out from the edges of the blindfold, spittle seeping down his chin, his freckled skin red and blotchy—but when Ryan traced a fingertip down his cheek and whispered, "Pretty boy," he felt beautiful.

"He is," Amber agreed from somewhere nearby. "And so obedient. I think we should give him his gift, don't you?"

"Oh, absolutely," Ryan said. "I think our little pet has earned it."

Gift? Kyle's eyes darted around, but the blindfold held fast and blocked every ray of light. He felt Amber's arms around him, easing him off his knees to lay back on the floor. She cradled his head in her lap, and he could smell the arousal coming off her in waves, taste it on the finger she pushed into his mouth, evidence she had been touching herself while watching him suck Ryan.

Amber told him to spread his legs, and he complied without hesitation, still unsure what the two of them had in mind for a gift. Then, all at once, his cock was swallowed by something warm, wet, and soft. It was so unexpected and fast that Kyle didn't at first realize it as a mouth until the very skillful tongue slid up his shaft and over the head. It was smaller and softer than Ryan's—a woman's mouth, then. But Amber was still holding him in her lap. Kyle instantly tensed—what the hell was going on?—but Amber stroked his hair and told him to relax. What else could he do but obey?

Crawl for Me (MF)
Daisy Philips
In Shelf
$2.99
Tweets by
sirenbookstrand