Brides for the Garrison Brothers 1

Brides for the Garrison Brothers 1

More From Brides for the Garrison Brothers 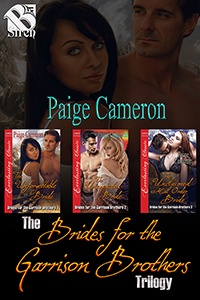 The Unclaimed Mail Order Bride (MF)
Paige Cameron
In Shelf
$4.99
All Books In Cart
All Books In Bookshelf
Excerpt

Hunter Garrison leaned back on the barstool and took a swallow of beer from his bottle. He smiled, watching his twin brothers play pool. They were highly competitive.

His brother, Fletcher, sat down beside him. “Who’s winning?”

“It goes back and forth, but Joel’s ahead right now.”

“What are you doing slumming? I thought since you’d decided to run for state senator you wouldn’t be coming to Charlie’s Bar,” Fletch said.

“The townspeople have to take me as I am. I’ve lived here all my thirty-two years except for college. Any changes at this point would be seen as false. Charlie, give Fletch a beer.”

“There’s Cort and Devin. We’ll have a grand old time tonight. I like it when we all manage to get together on Saturday night. I wish Heath was home from New York,” Fletch said.

“Mom said he’d be home next week for a visit,” Hunter added. The bar and lounge was getting crowded.

A band was setting up their equipment at one end of the room. Dancing started at eight o’clock. Hunter placed his beer bottle on the counter. “I’m heading out before they start playing.”

“A lot of pretty women are already arriving,” Fletch teased.

“Cornelia will show up and try to get all my attention. I’m sorry I dated her a few months ago. It’s hard to tell her ‘no’ nicely. I feel like I’m being stalked.”

Fletch put his bottle on the counter and laughed. “I warned you.”

“She’s not the right one. We’ll all probably get a lecture from Mom tomorrow about settling down and giving her grandkids. She says we’re all too picky.”

“You haven’t been interested in anyone since you broke off with that fancy lady lawyer from Cheyenne.”

“Don’t remind me. It was quite embarrassing to find out my finest quality was my rich family.” Hunter grinned. “It was a big blow to my ego.” Hunter started to get off his barstool when Fletch grabbed his arm.

Hunter glanced in that direction. Doreen and Billy Morris came inside along with a stranger. She was slender, with long, raven-black hair. The sparkling light of the ball rotating over the dance floor made it shine like satin. She was dressed like the other women in snug jeans, a shiny blue blouse, and boots.

“Who is she?” Hunter asked.

“I haven’t seen her around, but I heard Doreen had a friend moving here. That must be her.”

When Hunter walked closer something about the stranger bugged him. She looked vaguely familiar.

Doreen saw him and called out his name. Damn, I should have waited until they were lost in the crowd. He forced a smile. “Hi Doreen, Billy, how are you?”

“We wanted to reintroduce you to an old friend. Do you remember Lacey Donelles?”

Suddenly, when he looked into her sky-blue eyes, his memory sent him tumbling back to the past. She’d been one of his best friends when they were ten and eleven. Then, right after her twelfth birthday, her mother married and they moved to Washington, DC.

Lacey grinned. “I know. You were thirteen. Boys that age don’t write.”

“Are you visiting? I heard Doreen’s friend was moving here.”

“I’m staying. Do you know of a place I might buy?”

“My brother, Devin, can help you. He’s in here somewhere. He works in real estate when he’s not riding in the rodeo. But if you miss him tonight, I’ll mention it to him tomorrow when I see him at my parents’ house.”

“Ask him to call me at Doreen’s. And thanks. I guess we’d better go on and let you leave.”

Hunter nodded and went out the door. He strolled to his truck and got in. He had mixed emotions about leaving, but there’d be plenty of time to get to know Lacey again. He started the truck and headed to the ranch and his house.

She walked around the living room, into the dining room, and then the kitchen. “Wow, this is a cook’s dream.”

“Mom insisted we all have big kitchens, which are seldom used. She’s hoping we’ll marry women who like to cook.”

Lacey ran her hand over the marble countertops. “I like the double wall ovens. You don’t have to bend to put dishes in or take them out.”

“I can, but I lost the joy of it. Maybe I’ll do some cooking and baking at the house I’m renting and see how I do. I gather that’s your mother’s number one requirement.” Her expression was filled with amusement.

Hunter moved closer and caught her between the counter and him. “It’s not my number one requirement.”

A devilish look came into his eyes.

“What could that be?” Lacey knew she was playing with fire, but couldn’t or didn’t want to stop herself.

“First, she’d have to be a good kisser.” He leaned down and brushed her lips with his. Then his mouth slid further along her neck to where her pulse beat like a drum. “And she’d have to be excited by my touch.” He kissed the spot, and then opened the top button on her blouse. He pulled the material to the side and nibbled on her shoulder.

“I’d want my woman to taste and smell sweet and desirable.” He kissed her breastbone.

Lacey knew she’d be a puddle of desire at his feet if his body hadn’t been holding her up. His long, hard cock pulsed against her abdomen and her pussy clenched tight with hunger.

He stared into her eyes as he undid the rest of her buttons and placed her blouse to the side on the counter. A spark of desire kindled a fire in her belly. It’d been so long since she’d felt desirable or wanted to be touched.

Hunter reached behind her and unclasped her bra. It fell down her arms and he threw it to the side. His big, warm hands held her breasts.

“They’re beautiful.” He grazed his teeth across her nipples. “And they taste good.” A shiver brushed across her shoulders.

Then he took her bud in his mouth and licked and sucked on it. She held his head tight against her breast. When he straightened, she rubbed her lower body back and forth across his hungry cock.

Hunter’s breath sped up and his eyes glazed with desire. “I want you. But if you want me to stop say so now, while I still can, or I’m going to carry you to my bed.”

“This is not a commitment,” Lacey said.

“Then please take me to your bedroom.”

He lifted her in his arms and carried her across the house, down the hall, and into his large master suite. When he sat her down, she looked around at the king-sized bed and the other furniture. Hunter turned her face back toward him. He kissed her and then placed her on his bed. He threw off his clothes and removed the rest of hers before lying beside her.

She’d never thought of a man being beautiful, but he was, from his handsome face to his broad shoulders and tanned chest. His six-pack was well-defined. He had narrow hips and long, muscled legs. She looked back up at his face and found him smiling.

“Let me study you for a minute.”

Her heart beat erratically as his gaze moved from her face down her body. His fingers brushed across her mouth and along her neck. He lightly touched her breasts and more firmly gripped her waist. Then he caressed her legs all the way to her feet, where he sat and massaged them.

“That feels so good. You may put me to sleep.”

“Don’t worry, you aren’t going to sleep, at least not yet.” He slid upward, kissing the inside of her legs on the way and around her lower lips.

“I love your musky scent.” He reached for the bedside table and placed a condom nearby.

Hunter straddled her body and kissed and licked each breast until she squirmed under him. Her body was hot and impassioned, and her mind had narrowed to this man and his touch. She reached between them and wrapped her hand around his cock and gently squeezed.

“Ah, darlin’, be careful or this will be over way too soon.”

“If you get to touch and kiss, I do too.” She pushed him on his back and kissed her way from his neck to his dick. She took him in her hand and licked the salty drop off the crown. Then she took him in her mouth as deep as possible. His hands gripped her hair gently.

She licked around the sides of his cock, and then moved her head in an up-and-down motion. His groans encouraged her to move faster, and her pussy clenched as her own desire flared more brightly.

Hunter’s fingers brushed across her sensitive nipples as she sucked on his cock. “Enough,” he said. He pulled her up to him, kissed her, and rolled her body under him. In one quick move he grabbed the condom and rolled it on his cock. Then he thrust inside her tight, hungry pussy to the hilt.

She yelled out as an explosive rush of passion swept through her. 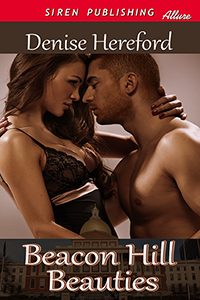