Julia Dennis has spent her life bouncing around with no home of her own. When luck and fate gives her the opportunity to buy a house in Salem, Mass. she is enchanted with Haven House and the ghost she finds there, starting her down a path that will alter her life.

Thomas Perry was hung for witchcraft in Salem. The trauma of his unjust death trapped him in a middle world where he's lingered for three hundred years. When the new owner moves in, he begins to remember things about life that had slipped from his mind almost completely. The desire to live and love has never been stronger for him.

Julia and Thomas are drawn together by love, but will their love be enough to bring them together for the happily ever after they both deserve? 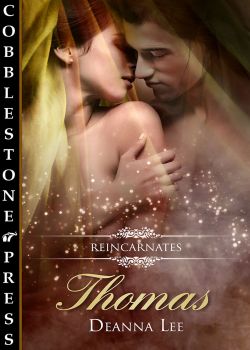 Julia Dennis tore open the legal-sized manila envelope and dumped the paperwork and keys to her new home onto her lap. Tossing aside the papers, she clutched the keys in her hand until the metal bit into her palm. This moment had been too long in coming. Despite the steadily pouring rain, she couldn’t have been happier. Holding the keys tightly, she picked up the paperwork again, letting her fingers brush over the letters of the deed, something she’d done often in the two months since purchasing Haven House.

Pulling the hood of her raincoat over her hair and pushing open the car door, she darted out into the rain toward the house. Pausing on the porch to catch her breath, she pushed back her hood, looked out into the drizzle and laughed.

It still felt odd. Nearly all of her life, going home had meant greeting a small dorm room or, after she’d graduated college, an impossibly overpriced and tiny apartment. Now there was a house in her world.

Jingling the keys a little, she went to the door and tried the keys out until one worked. The click of the lock brought unexpected tears to her eyes. Opening the door and peeking inside, she laughed at her own foolishness and threw open the door.

“Hello, house,” Julia whispered, overwhelmed with relief. She dropped the keys into the pocket of her coat and turned a complete circle in the middle of the foyer.

She had a place of her own. The knowledge warmed a part of her that had lain cold for years. The house had changed little since the time she’d lived there. She had been one of the many foster children to come through Haven House. It had been the one place in her life that had been safe, and now it was hers.

Based on the realtor’s recommendations, she’d had the utilities turned on, and a construction crew had been sent into the house before she’d shipped any of her furniture. The furniture that had come with the house had been polished and cleaned. Her shoes squeaked on the hardwood floor as she entered the formal dining room and turned on the light.

Having lived in apartments or the homes of others most of her life, first in foster care and then on her own, the furniture was a solid reminder that she had a whole new world to live in. A big beautiful house, full of the furniture she’d always wanted but couldn’t really afford. She’d worked hard for everything and valued what she had earned. Education had come first, and now there was her home. The nagging thought that she had no family to share the space with was there, but she pushed that feeling aside and forced herself to think about making Haven House her home.

“There is time.” Her whisper filled the room and seemed to float above her head into the rest of the house.

Straightening her shoulders, she went back outside to gather her luggage. It would take several trips, but she didn’t mind—nothing was more important than starting her life in her new home. Once all of her luggage was inside, she lugged it upstairs to the master bedroom. Julia sighed as she shrugged out of her raincoat and tossed it across her pile of luggage. Looking at the queen-size sleigh bed she’d had shipped to the house made her wish that she wasn’t soaking wet. It would have been absolute heaven to crawl into it and go to sleep.

After unhooking her cell phone from her purse and dialing her best friend’s number, she sat on a narrow bench next to the door. “Hey! I’m here.”

“Oh, yes. The movers and the cleaning people put everything to rights. I don’t have to do a thing but unpack the clothes I kept with me.”

“I can’t believe you spent all of that money on a house.”

Julia laughed. “It wasn’t all of the money. I still have a nice savings account. How are things?”

Julia grinned. “Neither, tell me about your new guy.”

“New ex-guy.” Melissa sighed. “He couldn’t fuck his way out of a wet paper sack. How am I supposed to put up with that?”

“I’ve no idea.” Julia muffled her laughter, not wanting to encourage her friend. “It’s great to hear your voice. It’s odd being on my own again.”

“Well, you’re the one who moved,” Melissa muttered. “So, the house is beautiful?”

“Oh yes, the repairs went beautifully.” Julia stood and walked around her bedroom. She strolled to one closet and found it full of her winter clothes. “The mover even hung up the clothes I sent in the truck.”

“That must be the most expensive moving company known to man.”

“They were worth every penny.”

“Have you decided what you’re going to do yet?”

“I’m still thinking. I have an offer from a small law firm in town, although it would be nice to work with someone more experienced. I don’t know if I’m ready to hang my own shingle yet.” Julia leaned back against the wall and stared at the ceiling. “What about you, are you going to get a new roommate?”

Julia took a deep breath as her friend rattled on about roommate interviews, her job, and the work she was doing. After the phone call ended, Julia dropped her cell phone onto the bed and went into the bathroom off the master suite. The old-fashioned, claw-foot tub made her smile; the plumbers that had been hired had begged to replace it. However, it was the one thing she had insisted on keeping. She still needed to replace the rest of the plumbing in the house—new sinks, a shower stall. Her gaze darted from the shower stall and then back to the tub. What a decision, she thought.

Thomas watched the woman with interest. It had been nearly two years since anyone occupied the house, and the last owners had been an elderly couple. The best thing about them, of course, had been their television—he’d been playing with the new owner’s television since the movers had arrived with it. He hadn’t expected a single woman. He was interested in her in a way that had practically become foreign to him.

The woman shrugged out of her blouse, exposing a lacy bra and, uncomfortable, Thomas moved away from the door of the bathroom. Over the years, the privacy of others had not meant much to him, but somehow staying with her as she undressed felt wrong. This woman was different. Once in her bedroom, he paused and listened to her move around the bathroom. The rustle of clothing caught his attention. He started to move back toward the bathroom door but changed his mind and backed away.

Uneasy but overwhelmingly curious, Thomas edged back to the door of the bathroom.