More From The Departed 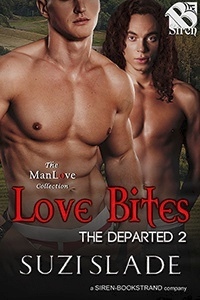 Syrupy black smoke rolled across the barren wasteland. It wafted around the undulating trenches like an artist’s paintbrush dipped in water. Blue-grey plumes gathered and puffed from the charred corpses that littered the sodden ground, ground that had been trampled to nothing more than mulch under thousands of heavy boots. Even the red kites had scarpered through flight the very first day the men had arrived with their dented steel helmets and cumbersome rifles. Not a sound graced the tragic scene.

He awoke with a hunger like he had never felt before. Or was it thirst? He couldn’t tell. All he knew was his gut was clenching painfully in intervals of no more than a few seconds. He supposed this was what labour felt like. Lurching onto his side, he gripped his irascible stomach and coughed, the violent shudders wracking his muscled body. The coppery taste of blood filled his mouth. Ignoring the pain that blossomed in his skull as his unprotected head collided with the piled-up sandbags, he flopped around like a fish caught on a hook, fighting for solace.

The soldier felt as though his throat had been abused by a thousand cactuses as he attempted to gasp in each lungful of air. He wanted to scream. He tried, but he couldn’t. The hoarse sounds clung to the insides of his gullet, refusing to budge as his square jaw flapped spasmodically. His tongue felt crisp and twice the size as it filled every dank crevice of his mouth. The acrid stench of burning flesh filled the night air around him, not a smell he was unused to, though. Any breath he did manage to heave into his body sat heavy in his violated lungs.

It was dark, extremely dark. He could feel hot, sticky blood pooling around the puffed-up remains of his left eye as he tried unsuccessfully to pry his fastened eyelids apart with his filthy fingers, only to be rewarded with the other streaming angry tears as agony shot from the epicentre  of the gaping wound. His intact eye rolled in its socket as his broken body trembled with torment. His limbs felt unwieldy. The caked mud that had seeped through his clothes froze his goose-pimpled skin as he attempted to heave himself up. His heart thundered in his ears as every moment he sunk lower into the frothy earth.

He slowly came to realisation that other than his groans, the fields were silent. The soldier gasped and froze stock still. Was it over? Was the war finally over? Lifting his woolly head a little, he narrowed his watering eye as a shadowy figure strode towards him without making a sound. The soldier stretched one long arm out, reaching for nothing, clutching at nothing. Sweat covered his brow. He didn’t care if it was a Jerry. At least if the bastard decided to off him, it would mean the end of the relentless pain that frayed every one of his nerves.

“Pl—please …” the young man managed to choke out, still stretching towards the unknown. “Please, help me.”

The looming shadow crouched, gazing at the other who was still writhing around in the bloodied mud. The newcomer cocked his head and narrowed his carmine eyes slightly. Whipping out a leather-clad hand, he gripped at the tags that were jingling on the chain around the soldier’s neck and admired the glinting metal in his palm. They read “Henry Bathory” and apparently, he was from Scotland. The corner of his lips quirked up, yes, he was sure he had detected an accent in the handful of words Henry had managed. With a quick snap of his wrist, he pulled the silver tags free from his neck and held them up so they dangled back and forth. His sparkling eyes followed the movement languidly.

His clothes were all black but he wasn’t in any kind of uniform. His boots shone about the toes where they had been buffed to perfection, despite the feet of mud he must have had to trudge through to reach the dying solider. The leather of his gloves looked soft, as though it had just been oiled, and his alabaster complexion was a stark contrast to his dark attire. His skin glowed white in the dewy moonlight. His hair was longer than any sergeant would allow the men under them to sport, sweeping in dainty ringlets past the elegant shell of his ears. It brushed against his long, graceful neck. He crouched over the dark-haired man.

Henry swallowed the prickly lump that sat in his burning throat. He tried to swallow past the congealing blood on his tongue It made a clicking sound in his ears whilst he desperately fought the overwhelming urge to pass out. With a dirt-crusted hand, he gripped the silent man’s wrist, half expecting a thump that never came. Instead, the stranger uncurled the other man’s fingers from his sleeve and slid the dog tags into his woollen coat pocket. He blinked slowly and once again stared down at the broken man. Henry’s one bright eye gazed right back at him, imploring with him to do something, anything. But what?

Still savouring the salty tang of his skin, Henry ran his hand down the length of Cassander’s torso, feeling his way over every ripple of delicate muscle beneath the soft cotton shirt. He kneaded his flesh hard before he reached the buckle of his breeches. Hesitantly, he moved his hand over the growing erection, tenting the fabric, massaging it through the rough material. Henry panted. He’d never touched another man in such a way. He had heard the soft moans from some of the lonely men in the trenches in the dead of night and although he’d felt the pang of arousal listening to them, he’d made sure he never succumbed to his own desire. He knew what his own felt like. He knew how good what he was doing felt when someone else, like a pretty young girl, did it to him. Inside he was screaming, telling himself what he was doing was wrong, telling himself to stop. But he didn’t. Cas shuddered and bucked his hips up greedily into the touch.

Clumsily, shakily, he unbuttoned Henry’s shirt. He smoothed his hands over the undulating pecks, the light smattering of hair ticking the pads of his fingers. Locating Henry’s velvety nipples, he twisted them gently until they stood pronounced on his chest. Tearing his shirt open, Cassander took each of his nipples into his mouth in turn, swirling his tongue around them, drawing a moan from Henry, who tangled the fingers of his free hand into his red hair. Henry’s cock had grown hard beneath his care and was crushed tightly inside his trousers. Cas unclipped the braces and, unbuttoning his grubby trousers, he drew Henry to his knees and shucked the dark grey material from his legs, yanking off his shoes in the process.

Henry’s fat prick sprung free at once, pointing straight at Cassander. His mouth watered for the huge, veiny piece of meat. Lurching forwards, into his lap, Cas took the huge rod of searing hot flesh into his mouth in one go and sucked it mercilessly. He wasn’t gentle and it wasn’t loving. It was what he’d been craving since the first moment he met the broken soldier. His fangs grazed along the sensitive skin as he pumped his neck back and forth. Henry howled at the top of his lungs, urging Cassander’s head forwards with his hands, his glans colliding hard with the back of his throat, making his eyes water and his jaw ache.

Too many sensations overwhelmed Henry. If he didn’t pace himself, it would all be over too soon. He slid his cock from the redhead’s mouth with a slurp and tugged him up for another kiss. Henry deftly unbuckled Cassander’s dirty trousers. He pulled them down to reveal his long, slender erection. It was perfectly straight, unlike his own, which curved upwards slightly. Henry’s eyes went wide. He smoothed his hand over the soft skin. Flipping the redheaded vampire over so he was on all fours, he grabbed a handful of the shirt on his back and yanked him backwards. His prick slapped against Cas’s gloriously silky arse. Pulling the peachy cheeks apart, Henry slicked his forefinger in saliva and pushed it inside Cas with one smooth movement, enjoying the way the tight ring of muscle expanded, then contracted around him.

Cassander yelped, shivering at the breech, but he pushed back onto the finger, driving the digit deeper inside him. Soon there were two, then a third stretching his hole as far as it would go. He panted and moaned, biting into his lip, being careful not to break the skin. The fabric of his shirt was being pulled tight against his chest, digging into his neck. Goose pimples burst over every inch of his flesh although he was far from cold now.

“Just do it, Henry,” Cas pleaded, looking back over his shoulder into his odd eyes. “Please, just take me. I can wait no longer.”

Henry didn’t need asking twice. Freeing his fingers, he spat into his palm and rubbed it over his twitching member. He was going to enjoy this. He just hoped Cassander did too. His bulging helmet bobbed against Cas’s pretty little hole. Pushing inside him, painfully slowly, Henry flung his head back and groaned loudly when the warm entrance greeted him eagerly. His fingers dug into Cas’s hips as haltingly he began a pistoning motion. His enthusiastic thrusts met in kind by the red-haired vampire he fucked. Cassander was tugging on his own leaking cock in time.

All too soon, Henry felt his climax burning in the pit of his loins. Sweat plastered his skin, the sound of wet slapping filling the air as his heavy balls collided with Cassander’s lovely buttocks. With one last almighty shove, he drove into Cas. Henry called his maker’s name into the dark as he shot reams of hot, sticky semen inside of him. Cassander squeezed his own cock hard. His orgasm followed shortly, tearing through him like wildfire. His skin hot to touch as his body convulsed violently around Henry. Collapsing on top of the pile of their discarded clothes, they lay in the dusky room, trying to breathe again.

When Irish Eyes Are Smiling
Stormy Glenn
In Shelf
$5.99
Tweets by
sirenbookstrand