Danger is heading to Fort Wills...

Leaving The Skulls was the best and worst decision of his life. Butch knew to keep his woman, Cheryl and her young son safe, he needed to make sacrifices, and pulling out of the club was the only way to go. Cheryl loves Butch, but she will not accept him quitting the club. She doesn’t need him to become a saint in order to love him.

Butch cannot understand that and is more than willing to make any sacrifice necessary for Cheryl, but now those very sacrifices are about to tear apart everything he’s ever known.

With a new threat facing them and no way for him to protect his woman, Butch has to make a choice. However, Butch is not all that he seems. He’s got a past that even The Skulls don’t know about, and no one is safe.

Life as The Skulls know it is about to be blown apart. 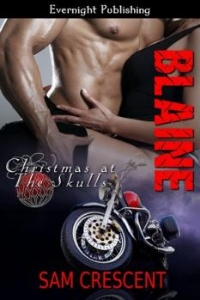 “Do you want to come in?” she asked, finally finding her voice.

He stepped through the door, and she moved out of the way for him to enter. “Thanks, babe. Dinner smells amazing.”

She smiled. “Thanks. I’m about to dish up. Do you want to come on through?” Crap, she was starting to sound like some waitress.

Butch caught her hand. “You’re not getting away from me that easily.” The door was closed, and he pressed her against it. “Where’s Matthew?”

Was he going to kiss her? She didn’t know what to expect, and the anticipation was killing her.

“I didn’t. Matthew loves spending time with my mom. She loves having him. I thought it would be nice for us to be alone.” He cupped her cheek, and all thought fled her mind at the contact. His palm was rough from years of hard work. Butch wasn’t shy about work.

“Yes.” The word came out as a croak. He was invading her privacy, and her body was coming alive after years of being kept asleep.

“I’ve been thinking about doing this all day.” Butch leaned in close. His breath fanned across her face, making her moan. Tilting her head back, she ran her hands up his chest wanting more than anything to feel his lips on hers.

You’ve known him long enough to want this. Don’t feel guilty for wanting this.

In that moment with his lips mere inches from her face, she didn’t give a shit either way. His lips were on hers, and she was in heaven. Tugging at the strands of hair at the back of his neck, she moaned at the feel of his hard body pressed against hers. Closing her eyes, she melted against him. The hand on her cheek sank into her hair, tugging on the strands while his other gripped her hip tightly.

Lifting her leg over his hip, she felt the hard ridge of his cock pressing against her core. His tongue plundered her mouth as she rode his body. All sense left her as her body took over. She knew what she wanted even though her mind was trying to fight.