Matthew McCallister knew coming out to his father, a very conservative minister, would be the end of life in his hometown. With his younger brother, Ruben, by his side, he flees their hometown only to be arrested for kidnapping and theft. But the sheriff of Cade Creek seems to believe in Matty's innocence and suggests that he and Ruben hide out at the Blaecleah ranch.

Matty is in no way prepared for the Blaecleah family, especially Quaid Blaecleah. The man is gorgeous and kind, a combination Matty isn't used to in men he's attracted to. When Quaid proposes marriage as a way to save him from his father, Matty is terrified to agree because he's been used in the past. He's just as afraid to say no. Quaid intrigues Matty in a way he's never experienced. When Matty's father arrives in town and starts making threats, can Matty trust Quaid to keep him safe, or will he be burned again?

Heat Rating: Scorching
Word Count: 45,920
145 Ratings (4.7)
Contemporary Western/Cowboys Alternative (M/M, Gay)
In Bookshelf
In Cart
In Wish List
Available formats
PDF
HTML
Mobi
ePub
Cover Art by Jinger Heaston
Reviews
fantastic! i can't get enough of the Blaeclaeh brothers and she can't write them fast enough for me!!
69tracey
This third installment is a courtship. Quaid was a perfect gentleman, knight in shining armor, and prince charming to Matthew and his brother Ruben. My favorite book is still the second with Rourke and Billy. This story actually has major revelations about Billy that's why I love it as well.

1. Cowboy Easy was about POTENT CHEMISTRY among strong minded equals which Lachlan and Asa are.
2. Cowboy Keeper was a SEDUCTION of Bad boy Playboy Rourke and the innocent, abused, emotionally fragile Billy.
3. This was definitely a courtship. Matthew is no shrinking flower either. He is smart, resourceful and caring. Although like Rourke, Quaid is strictly a TOP.

I am glad there was a different feel among the love story of the brothers. A must buy!!! can't wait for Seamus and Neason's story. Dare I hope Ruben's too?

5 ANGELS: "Mathew "Matty" McCallister is finally ready to tell his parents that he is gay. Matty knows that his father, the fire and brimstone, gay-bashing minister, will never accept it and unfortunately, things go down as badly as he thought they would. His parents threw him out of the house, but since he'd already packed his things in his truck, it worked out ok. What he didn't expect was for his younger brother Ruben to beg to go with him. It seems that Ruben is also gay and has been planning to leave on his own but would rather go with his brother. Matty knows that his father will go after the money that was given to him for graduation, so he changes the accounts and has Ruben do the same. They make it to the state line before they are pulled over by Sheriff John Riley. John quickly realizes that their father has set them up so, Matty gives the Sheriff all of the documentation about the money in question and Ruben goes with him willingly. John clears them of all charges, but he suggests that they hole up somewhere safe and sends them to stay at the Blaecleah's ranch. They are scared to go, but at the ranch, they find acceptance and a family that they never had. When Quaid Blaecleah first sets his eyes on Matty, he sees the man he's been looking for all of his life but only if he can only get past the distrust and fear surrounding Mathew like a cloak. Matty can't take his eyes off Quaid, but is he ready to trust again? This is the third book in the Blaecleah Brother's series and it definitely lives up to and exceeds the earlier books in the series. It's sad how many religious individuals use their pulpit to espouse bigotry to their congregation. It was horrible to read how Matty and Ruben's father would go to any lengths to get revenge against Matty, by using the church to rationalize his behavior. The way the Blaecleah's opened their hearts and lives to Matty and Ruben was beautiful. I was inspired how the reverend, Benjamin Brody, taught the real meaning of loving your neighbor and the congregation followed his cues, creating a caring and accepting community. I wish all churches were as loving as the Blaecleah's was. Quaid's willingness to accept whatever friendship/love Mathew was willing to give him, in spite of what he wanted, was inspiring. Has Matty and Ruben's father washed his hands of them? Are they finally safe from him? Read this story to find out." -- Teresa, Fallen Angel Reviews

4 STARS: "In the third entry of the Blaecleah Brothers series, COWBOY WAY, we are dealing with bigotry, abuse, hope and survival. Ms. Glenn pens a story that while at times was difficult to read will have you believing in Happily Ever After.'I'm gay.' Two words that Matty knew were going to change his life. He just had no idea how much they would change it. Growing up in an ultra-conservative household, Matty knew his father, the good Reverend McCallister, would never condone having a gay son. With this knowledge always in the back of his mind, Matty planned for the day when he would make his announcement and be disowned and his father did not disappoint. What was a surprise was when Matty's younger brother asked him to take him with him because he is gay as well. Knowing they needed to get as far away from their father and his congregation as soon as they could, the two start driving and almost make it to the state line when Sheriff Riley stops them. Thankfully the Sheriff believes that they didn't steal from their father and tells them he knows of a place where they can stay until everything blows over. Quaid Blaecleah didn't know what to expect when the sheriff called asking if two men could stay with his family. But as soon as he saw Matty, he knew he had found his 'legend,' that one person that was meant for him. Now he just has to convince Matty without spooking him. Getting Matty to open up and trust him isn't going to be easy but Quaid knows it will be worth it. Just when Matty thinks he has found a place he can be himself and maybe find a little happiness, a misunderstanding leads to the worst of outcomes. This book almost felt like an ending to the series. A lot of the questions that were left unanswered in the first two books had resolution in this entry. We all want to believe in love at first sight but the swiftness in which Quaid falls for Matty gave me whiplash. One aspect that I found nice to read was the religious acceptance that was in this book and I thought it was a nice contrast to the vitriol that the McCallister brothers grew up hearing. I felt the character development was a little lacking when it came to Quaid's character compared to Matty's. The strong family ties that make this so great to read are very much in evidence in this addition. So what's next for the Blaecleah clan?? I guess we will just have to read the next installment to find out and I myself can't wait. So if you like hunky cowboys who seem to have an affinity for outdoor sex then this is the series for you." -- Rebecca, The Romance Reviews 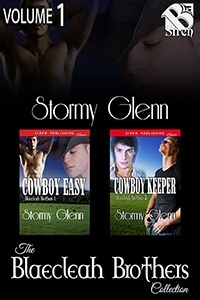 Matty tilted his head back when Quaid started nuzzling his neck. He cried out and arched, pulling his knees up, when Quaid’s teeth started scraping along his throat muscles. He never would have thought biting could arouse him so much. He was wrong. It felt incredible.

Matty had no idea if that was a good thing or not. He forgot to care when Quaid’s lips moved further down his body. Quaid started licking at Matty’s nipples first, moving from one then to the other. Matty shuddered when Quaid started nibbling.

Yep, he liked biting. Go him.

“Quaid!” Matty inhaled sharply, his abdomen rippling when Quaid’s tongue moved across his hot skin. He reached down and grabbed a handful of Quaid’s reddish hair. Quaid chuckled and moved down past Matty’s belly button.

Matty held his breath as he watched Quaid hover over his hard cock. He could feel the man’s breath blowing gently across his aching flesh. Quaid glanced up and smiled then stick his tongue out and licked across the top.

Matty’s entire body trembled. He didn’t remember sex being this intense. Quaid was turning him inside out, and he seemed to just to be getting started.

“Hand me the lube and condom, angel.”

Matty searched around until his hand landed on the two small items. He picked them up and handed them to Quaid. When Quaid tore the condom package open with his teeth, Matty had to see. He leaned up on his elbows and watched Quaid expertly roll the condom down his thick erect cock.

Matty didn’t realize he had spoken out loud until Quaid grinned up at him. His face flushed, and he quickly glanced away.

“Not to worry, angel, you can put the condom on me next time.”

“You ready for this, angel?”

“Yes,” Matty whispered as he shook his head.

Quaid chuckled. “Let’s see if we can make you a little more comfortable.”

Matty’s eyes widened as Quaid leaned down and sucked the head of his cock into his mouth. At the same time, Quaid pushed Matty’s legs up. Matty’s head dropped back when Quaid began to suck on his cock.

Okay, Quaid could officially do whatever he wanted as long as he never stopped doing whatever it was he was doing with his tongue, Matty thought as his senses overloaded.

The licking and sucking on his cock felt so intense it didn’t even hurt Matty when Quaid pressed a finger into his ass. Both sensations melded together, becoming one intense, mind-blowing ecstasy until time became meaningless.

Matty looked up. Quaid’s jaw was clenched. The corded muscles on his neck stood ridged. Matty nodded, fascinated by the control Quaid was exerting. He could tell that Quaid was on the edge of control and holding on for his sake.

Matty’s breath hitched in his throat as he felt Quaid’s cock gently push into his ass. There was a slight twinge but not enough to take away from the pleasure he felt at being so full. Every nerve in his body was tingling.

Quaid hooked an arm under Matty’s leg then leaned down over his body. His free hand gently stroked the side of Matty’s face. His deep green eyes, a mere inch away, never left Matty’s.

Quaid grinned and started moving. A slender, delicate thread began to form between them with every thrust. Matty had longed for someone for longer than he could remember. That someone was staring down at him with tenderness that Matty’s eyes watered. He felt special, cherished. He felt wanted.

“More, Quaid,” Matty whispered as he pressed his hands against Quaid’s slick chest. “I want more.”