Heat Rating: Sextreme
Word Count: 87,276
8 Ratings (4.6)
Contemporary Paranormal Vampires/Werewolves
[Siren Classic: Erotic Paranormal Romance, werewolves, sex in partially shifted form, HEA]
Lynne is a happy, caring, young social worker who loves life and finds humor in most situations. Chief Enforcer Kilchil Hunt is a feared executioner of Were justice. He’s a ruthless hunter and stone-cold killer. Females are terrified of him and his lethal reputation. Lynne and Kil are complete opposites but they are destined for each other.
With both horror and humor Lynne comes to terms with her previously unknown Were heritage and her werewolf mate. But can she accept that to complete their bond they must mate on the full moon?
Kil thinks he’s not good mate material. He expected someone emotionless, like him. Can he cope with the changes his Sunshine brings? Who affects whom more?
Fate weaves an exciting tale with ironic twists and surprises. Kil discovers that consequences of past actions can reach beyond an enemy’s grave. Can they overcome the obstacles before the next full moon? Will they be fully mated and permanently bound?
Note: Although it belongs to a series, this book can be read as a stand-alone title.
A Siren Erotic Romance

Kil oversaw the shift change of the guards at The Den—the large house and estate that was home to Will Hawke and the headquarters of both the Montana Mountain Pack and all the North American packs. Someone else could have driven the replacement guards from the party, but he told Will that he wanted the fresh air. In reality he found such social gatherings increasingly awkward. He felt that he was slipping—losing his so-called “humanity.” Shit, when he’d smiled at the pretty blonde she’d almost pissed herself. When was the last time he’d had a conversation with a female? It was months ago since he’d fucked a woman, and that certainly hadn’t involved talking. Verbal social interaction seemed meaningless to him. He would not have cared except that such antisocial inclinations might herald the start of a downward spiral toward becoming lorn—something he fought to delay as long as possible. He usually stamped down such brooding thoughts by keeping busy.

He talked with the guards who were finishing their shift at The Den, and reassured himself that all was well. He couldn’t put off returning to the party any longer, and his males, the guards, deserved the break. As he headed down the stone steps to the SUV something on the periphery of his excellent night vision caught his eye. A lady’s scarf was snagged low in a bush, struggling to get free and fluttering in the light breeze. He walked over and carefully unhooked the scrap of girlie pink material. He took a sniff to see if he could identify the owner.

Kilchil Hunt, feared, ruthless Chief Enforcer of Were justice, elite hunter, cold-blooded executioner, death-hand of the Prime Alpha, and unshakable defender of The Lore…almost choked in shock and tripped over his size 14 moccasin-clad feet. His mind reeled along with his body as he stumbled to right himself. For the first time in over 190 years he was completely stunned.

He clutched the soft pink scarf in his callused hands and held it to his nose again to verify what he already knew in his bones and soul to be true. He inhaled. He had no doubt. It was there beneath Joanna’s tantalizing pre-mated scent. Another Were female’s fragrance. It seized him by the balls, twisted his heart, and focused his mind on one single coherent thought. My Mate. He inhaled deeply again and absorbed the scent of his future.

He heard Alan Catcher, one of his men waiting in the truck twenty yards away, whisper, “Who’s going to tell him that pink’s not his color?”

The others responded with low chuckles, but not one of them would dare tease him to his face. Sometimes he regretted the hard wall he’d built around himself, but it was necessary for the job he did.

His men were all in good spirits tonight. Will Hawk, their Prime Alpha, had finally found his mate, the rare female werewolf Katherine Akara, and tonight they were celebrating their bonding and marriage. Will was the only person who was relaxed in Kil’s company. They were close, had even become blood brothers, and Kil’s loyalty to his Prime went beyond mere duty.

“Hey, Chief, you okay?” Catcher called from the truck.

Okay? No he wasn’t okay. He was astounded and assaulted by more emotions than he had ever had to deal with in his long and increasingly jaded life. It was a lonely existence dominated by duty and service as the unmated Chief Enforcer of all the North American packs. Not for much longer. His whole world had just tipped on its axis.

“I am fine. You drive. I will ride shotgun.” He quickly schooled his features and spoke evenly, not giving a hint of the turmoil he was in.

Catcher obeyed without question and slid over into the driver’s seat. If he’d noticed Kil’s stumble or initial shocked expression, he didn’t say. Kil carefully folded the scarf and tucked it inside his traditional Native American tunic, next to his heart.

As they drove back to the wedding party his mind slowly recovered from the awing experience of having scented his mate for the first time. He urgently needed to speak to Will and Joanna, to find out who and where his mate was. Then he would go hunting. With typical dark humor the Enforcers had an unofficial motto—Prey: Kill it or fuck it. He would choose the latter for a change.

Lynne stared deep into Kil’s eyes as he hovered over her. He would miss nothing. Neither would she. His eyes blazed with desire. His jaw was set hard, and his face was tight with concentration. When she felt the first pinch of stretched flesh, her breath caught. He backed off a little.

In a strained voice he asked, “Are we good?”

She nodded. He kissed her while he nudged farther on and progressed in small pulses until the thick crown of his cock breached her body.

“Ugh,” she half huffed, half moaned into his mouth. It felt as thick as it looked.

He rose up off his forearms to his hands, concern evident in his gaze. “Okay?”

“There is more.” He looked almost apologetic.

His eyes and nostrils flared. Steadily he forged on until he was buried deep. It was as if he shared occupation of her body.

“Oh, Lynne, you have taken me all, I am balls-deep, bottomed out. You were made for me.”

She was stuffed full of his huge cock, and it felt good, right, and tight inside her.

“For each other,” she added.

She felt him tremble and knew it wasn’t with muscular fatigue.

“You okay?” She brought her hand to his face and cupped his strong jaw.

He closed his eyes, turned his face to her hand and rubbed against it. When he opened his eyes there was something humbling about his yearning gaze. In that moment she considered herself privileged to be the one who so affected this strong man—male.

She felt the solid mass of his cock move inside her as he slowly pulled back and then slid forward again. The slight discomfort of dragged, stretched tight flesh gave way to the pure pleasure of full, deep penetration.

Kil broke his gaze and peered down to where their bodies were joined.

She did and was entranced. She saw his huge turgid cock, veined and topped with a fat bulbous purplish head. It looked flushed, fierce, and intimidating, yet he used it to gently stroke between her swollen folds and over her sensitive clit. The sensations rose again, taking her to the edge of another orgasm. Her breath became choppy.

“Please,” she pleaded. “Please get back inside me. I’m gonna come.”

Without a word he thrust into her. Her eyes snapped to his a fraction of a second before she screwed them tightly shut. She saw red. She saw bright stars. She came shouting his name. Kil groaned long and deep, and stopped moving. The tightness inside her subsided a little, and she drew breath.

Her eyes flew open. He hadn’t—?

“I love seeing you come.” His voice and expression were strained.

Then Kil moved. He thrust into her at a controlled pace. She knew he was holding back. She pulled him down into a kiss, wrapped her legs tight around his waist, and raised her hips to his, meeting his thrusts harder and faster.

“More,” she panted into his neck. She felt as if something feral inside her was rising, clawing to get out. She dug her nails into his back. “Fuck me.”

He definitely growled this time, and when he pulled back she saw that his face had subtly altered. Wider nose. Sharper teeth. Darkest eyes. At that moment she became all female Were and responded to her werewolf mate. Her gums ached. Her tongue swept over longer, sharper canines. Fangs. She bared her teeth at him and snarled. He responded. He pounded into her.

Lynne held on for the ride of her life. Her fingernails frantically clawed at Kil’s back, and her cunt clasped tightly around his cock as she came with primal intensity. She reared up and sank her teeth into his shoulder. His blood tasted sweet and metallic on her tongue.

He roared in response and matched her bite. The sharp pain jangled her nerves and morphed into euphoric pleasure. He gripped her firmly with his teeth while his hips bucked wildly between her thighs. One, two, three more powerful thrusts and he stopped, butted up hard against her pelvis. His whole body shuddered.

Their mutual reaction was almost simultaneous. Their connection went beyond physical to spiritual, in a heartbeat. Her soul flew its corporeal cage into a space that existed between time and place, beyond life and before death.

She was not alone. Kil was with her—a mighty, solid, presence. His titanium-like spirit was indomitable, disciplined, resolute and just. There was darkness too, a hardness capable of brutality and violence. He was awesome and fearsome. She accepted it all because he was hers. Her principled savage. He needed her as much as she needed him. He was a worthy male who would care for and protect her, and she would be the love and lightness in his life. They merged. The moment was stretched by a shared joy almost too great to contain.

Their spirits separated, but she felt as if there was an imprint left on her soul. They slowly glided down from the high and returned to the here and now. Good God, now she understood what all the fuss was about, though she was certain that it hadn’t been normal sex. Something extraordinary had happened. 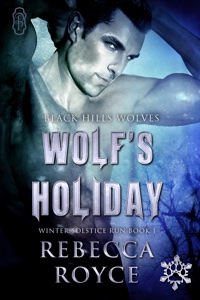