Kyla slipped the key into the lock, hands stilling. She held her breath and listened. She swore she heard footsteps. Shit! She held still, exhaled real slow and calmed her hammering heart. She rolled her eyes at her chicken shit self. She was chickening out. She turned the key till the lock clicked. She pulled the key out and waited. Was this what she really wanted? Six months he’d been gone. Six months she could think of nothing but him. She inhaled a calming breath wishing her heart would stop hammering so hard. She could do this. She would do this. He wasn’t making any moves. Someone had to! And that someone was her.

She shoved the keys in her coat pocket, held her hands in front of her mouth and blew on them. Damn it was cold. She glanced back at her car. She would have to thank Uncle George for tuning it up and making it so quiet. Rick shouldn’t have heard her drive up. He was home, his truck in its usual spot in the drive way. Her heart started hammering in her chest again. Her pussy clenched and she turned the knob. She was going to do this. She closed the door and locked it again, listening carefully.

The main-level suite was dark. He must be sleeping. She inhaled a calming breath and slipped her boots and coat off and headed toward his bedroom. The soft whimpers of a woman stopped her dead in her tracks. She held her breath and listened, before she knew it she was at the door to what she assumed was his bedroom staring. A blonde lay naked, arms and legs restrained to each post of the four poster bed.

Kyla gasped. She had never seen that. The pussies she had seen in magazines looked nothing like that. They were soft and light pink, not this swollen, heated, dark red, glistening, throbbing, angry-looking mess. No wonder the woman was screaming!

The woman kneeling on the bed whirled around and the woman lying down groaned at the sight of Kyla in the doorway. Rick glanced up. “Kyla… What are you doing here?” he asked, way too calmly for Kyla’s liking.

Kyla shook her head. “I’m sorry I didn’t—I shouldn’t have. Oh God.” She turned on her heel and ran. Her heart plummeted to her stomach and tears blinded her. She should never have come. Oh what a fool she was to think he had any inkling of any kind of feeling for her!

Rick went to follow, glancing back at Monica and Becca. Monica was relaxed and had her breathing leveled out. Torn, he stopped and for the first time in his life wasn’t sure what to do. Follow and find out what Kyla had been doing here? Fuck that, he knew what she was doing here. It was the middle of the night. Shit!

Monica cleared her throat. “Go on,” she offered. Obviously it was a friend of his he needed to talk to. She calmed her breathing, her gaze landing on her lover, Becca. They had done it. Rick had gotten Becca to bring her to orgasm. It was all she wanted—to have the private time to see if she could still come from simple play.

Rick chased after Kyla, tumbling while he tried to get his shoes on. By the time he got outside she was in her car and spinning out of the driveway. “Fuck!” He watched the red of her tail lights disappear. “Fuck!” he gritted, fists clenched.

How the hell had she gotten in his place? He had locked the door. His breath fanned out in front of him in white puffs in the cold night air. He turned on his heel and returned to his apartment.

Monica watched as he loosened her binds. He looked pissed off. “I thought you were single,” she whispered.

Rick offered her a friendly smile. “I am… I didn’t expect her to show up here.” He massaged her ankles while Becca worked her wrists. “She’s not aware of what I do,” he said, filling her in.

Monica nodded. That was obvious. The poor woman looked petrified.

When Rick finished her aftercare she got dressed and the two women left his play room. He had said they could stay in his spare bedroom. It was all they wanted. They weren’t there to have a relationship, just to have him help Monica and Becca reawaken Monica’s slumbering sex drive.

Rick slumped back on his bed. Fuck! He glanced at the clock, twenty minutes. She should be at home by now. He grabbed his cell, flipping through his contacts till he had Kyla’s.

Kyla we need to talk.

He waited, would she reply. Did she make it home okay? She had looked absolutely devastated. His phone buzzed.

Nothing to talk about. Sorry I didn’t mean to interrupt.

Rick furrowed his brow. He had brought Monica to where she had wanted to be.

Need to talk to you. Call me, he ordered, well would have ordered if he was talking to her.

I’ll come over right now if you don’t call, he threatened.

Rick grunted. Don’t think I won’t!!! He waited. Nothing.

He growled and hopped from the bed. He rifled through his closet till he found a hoodie sweater and pulled it over his head. He stomped down the hall, pausing at the spare bedroom. He fisted his hands. He couldn’t leave them out here. Damn-it! Monica opened the door. “Going to her?” she asked.

“Good, going commando with you, Kyla.” He thrust in and both froze. Her mouth fell open. Then in slow motion her eyes closed and she winced in pain, burning ripping pain.

Kyla inhaled a sharp breath as he released a raspy one. “Ohh I don’t know about this,” she whined, squirming. He shushed her, cupping her face. Her eyes opened and looked at him with hurt. “Maybe you should have eased me into this,” she gritted.

He chuckled. “No easing here, love. Relax. Shit you’re tight.” He groaned. Kyla eased her breathing and he shifted. “Feel it, Kyla…” he pulled out and she squealed, legs tightening around him. He thrust back in. Slow and steady, his hips moved and he felt her whole body relaxed. He tilted her hips and she moaned at the place he hit deep in her.

Kyla’s eyes slammed shut. She wasn’t sure what that spot Rick had just touched deep in her but she wanted more of it. Her breathing accelerated, she grasped the sheets, and she moved her hips to catch a rhythm all her own until she was hammering against him. “Right there,” she panted. Her arms flew above her head and grabbed the base of the headboard, her body rising and thumping into his hips.

Their loud pants filled the air, and his balls slapped her ass. Tremors ripped up Rick’s spine. Shit! He reached between them and thumbed her clit. Kyla screamed, body jerking rapidly against his. Rick jackhammered her, panting her name against her neck. She screamed every curse word she could think of then his name… a long deep-throated moan ripping from her mouth and pouring over him.

Kyla rolled her hips as he settled on her, tremors still rippling through her. He hugged her body close. “Kyla… oh God, Kyla,” he roared her name, burying his head against her neck. “What you do to me,” he mumbled.

Kyla giggled. “I can’t stop, Rick,” she cried. Oh fuck she wanted more. Could he do more? “More please. I want more.”

Shivers crawled over his back at her request. “Need a sec, sugar,” he whispered.

Kyla moaned, her hips still moving against him. Chaos filled her and spread. Her limbs wrapped around him and demanded more of him.

Rick chuckled, holding her still. He eased up looking her in the eyes. Pride filled him. He cupped her cheek. “Lusty woman.” he hummed, thumb wiping away the tear slipping from her eye.

She clutched his shoulders. “Please,” she begged. She needed more, wanted more.

He licked his lips. The desire in her eyes broke his heart. He pulled her up with him, making sure not to break contact, and she gasped. “Like I had you on Mark,” he panted.

She nodded, straddling him, head falling back at the sensations his thick dick rent on her tight cunt. He grasped her close and lifted her. She sighed and he slammed her down on him. Kyla moaned at the sensations, the sounds.

“Ride me, Kyla,” he ordered, looping her arms over his shoulders. “Come on, babes, you can do it, faster,” he urged.

Kyla lifted herself up, shifting down, tremors of pleasure ripped through her, she repeated. Rick guided her as she slammed herself down on him, he could feel her cunt tightening. “Harder babes, you’re almost there,” he whispered.

Kyla groaned, hand twisting into his hair, pulling. She quickened her pace and soon bounced on him with an erratic pace.

Rick slammed her to the mattress, lifted her legs, and hammered her. She squeaked with every stroke then her cunt clamped around him and the spasm milked him. Her scream was continuous and filled the night air.

Rick eased out of her, brushing her hair from her brow. Her eyes were closed and her breath erratic. He kissed her jaw. “Be right back babes…” He waited for her eyes to open.

Kyla nodded. It was all she could muster at that point. She wasn’t sure she could even open her eyes, let alone open her mouth to respond. Her legs burned, her arms even ached uncomfortably. She moaned as her legs closed and spasms of left over passion gripped her. Her body shuddered.

Rick returned with a warm cloth and a glass of water. “Open your beautiful eyes, Kyla. Take a drink.” He handed her the glass. She gulped back the water and nearly sputtered it on him when he placed the warm cloth on her pussy.

He smirked at the outraged look on her face. She held the glass to him. He gulped back the rest and laid a kiss on her pussy. “Be right back,” he whispered.

Kyla nodded watching him go. She looked around the room, head spinning. She just had sex… twice! Oh God. She fell back exhilarated. She had Rick! He was hers and she was his… She smiled and her eyes closed.

Rick looked her over, splayed out in his bed, body flush from their loving the biggest smile on her face. He kissed her thigh. “Into bed, Sleeping Beauty,” he ordered, rolling her over, helping her crawl under the covers. He pulled her close and nestled her under his chin, snuggled the blankets around them and released a breath.

“Thank you,” she whispered, snuggling closer.

He smiled, laying a kiss on the top of her head. “Thank you, Kyla,” he replied, embrace tightening. He wasn’t ever going to let her go. He knew that right then and there. 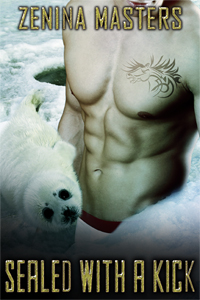 Sealed With A Kick
Zenina Masters
In Shelf
$3.99

Stuck with the Alpha (MM)
Marcy Jacks
In Shelf
$4.50
Tweets by
sirenbookstrand