Lyle Atwood's company is hired to costume a party given by multi-millionaire Warner Radclyffe. As he and his employees begin preparations for the job, Lyle begins to feel as if someone is watching him. Then he meets Damien Sauvage, the newest tenant in the apartment building where he lives.

Damien tells Lyle that he's a waiter, and when Lyle confides in him that he thinks he's being stalked, Damien offers to help find out who it is. What he neglects to tell Lyle is he actually works for Radclyffe, who wants him to protect Lyle from a very powerful enemy.

As Damien gains Lyle's confidence, he becomes attracted to the younger man -- an attraction that Lyle reciprocates. He fights his feelings, knowing Lyle will hate him when he finds out his secret -- and even more so when he learns what Damien really is.

Radclyffe orders Damien to continue the job, as he has a secret of his own involving Lyle. A secret that cannot be revealed until the night of the party.

Can Lyle survive what is to come, or will the lies of omission be the death of him -- or worse?

When they arrived at the apartment building, Damien drove slowly around the block before entering the parking garage. He didn't see anything or anyone who piqued his interest, and said so to Lyle.

He was equally as observant when they walked from his car to the elevator, and made it a point to get off first when they reached their floor. He gestured for Lyle to wait while he scanned the hallway in both directions, and again when they got to the turn leading to Lyle's apartment.

"Your place or mine?" he asked when he had determined no one was hiding in wait for Lyle.

Lyle gave a nod, went down to it and unlocked the door. He was about to go in when Damien put a hand on his shoulder to stop him.

"Might as well go the whole nine-yards," Damien told him under his breath before entering. A fast survey let him know no one was there, so he beckoned for Lyle to join him, saying, "I could do with some coffee."

"Me, too." Lyle went into the kitchen to fill and turn on the coffeemaker while Damien leaned against the doorway. "You can come in." Lyle gave him a shy smile.

"I know." Deciding it might be better to talk in there than the living room, Damien took a seat at the small table in one corner.

When the coffee was ready, Lyle poured it into two cups, brought them over, and sat as well. "Okay, as I've said more than once, there's no reason why someone should be stalking me, especially a woman unless you're right and she's helping someone else. The problem is, why would whoever it is bring in another person?"

"You're asking me?" Damien flashed him a brief grin. "It's pretty obvious, though, that someone is interested in you."

"Yeah, although I wish it had only been my imagination. That I could deal with. This ..." Lyle shook his head in obvious frustration.

"I wish I was off tomorrow and Monday. Then we could hang out together and see if she or the other person puts in another appearance. Not that the other one has, so far. That we know of, at least."

Lyle chortled. "Too bad you aren't. You could help me lug my groceries to my car and then up here."

"I'm not certain it's safe for you to go shopping," Damien retorted.

"Come on. They haven't done anything more than watch me, and I'll be out in public in broad daylight. Hell, if they planned on grabbing me for some reason, they they've had ample chances to do that already."

Damien had to admit he was right. I need to find out from Radclyffe who 'they' are and why they haven't taken Lyle already. Okay, that last could be because he hasn't come into his powers and won't until his birthday, but why wait until then to kidnap him? Boss, you and I are in for a long talk, I think.

Lyle sipped his coffee. From his expression he wanted to say something but wasn't certain he should. Then he blurted out, "Are you really a waiter? You seem to know an awful lot of things a detective would."

"Trust me, I spend half my time waiting," Damien replied. The truth, although not the way he knew Lyle would take it. "You can call my boss if you want."

"No." Lyle shook his head sharply. "If you say you are I believe you, although ... Maybe sometime in the past you worked for a detective agency?"

"Nope. I had an uncle who did. I probably picked up some ideas on what to do from listening to him tell stories about it."

Before Lyle could probe anymore, or get back to who was interested in him, Damien said, "I hate to spoil the party but unlike you, I have to work tomorrow. The boss wouldn't be too happy if I fell asleep on the job."

Laughing, Lyle agreed he probably wouldn't. He put their cups in the sink and then walked with Damien to the door.

"You be careful," Damien said. "I know you don't think you need to worry during the day, but still, keep your eyes open and if you feel threatened at all, head to the nearest group of people. You don't have to tell them what's going on but being with others should keep your stalker from doing anything."

"Got it. I promise I'll be hyper aware."

"Good. Okay, I'll check in when I get home tomorrow night."

"If you're not, I'm sending out the bloodhounds," Damien teased.

Laughing, Damien said "Goodnight," and returned to his apartment. 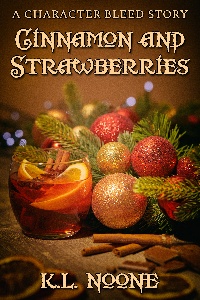