Priest doesn't believe he deserves reward in this life or the next, and he's fine with that—he lost his faith decades ago. After committing a bloodbath in the name of revenge, he has no regrets. He lives his life of solitude, working for Killer of Kings to keep the demons at bay. When an innocent woman gets in his way during a hit, his once dormant conscience comes back to haunt him.

Cleo Bennet didn't realize her entire life was about to turn upside down after taking an extra shift at work. She witnesses a grisly murder only to be kidnapped by the deadliest man alive. But her captor is anything but evil. He cares for her, puts up with her quirks, and she soon can't imagine life without him. Her enemy becomes her lover, and he's determined to keep her safe when she gets caught up in his world of life and death.

Can they find love and acceptance in each other or is Priest already a lost cause?

As he turned the corner, the first person he focused on was Cleo sitting at the large island. He briefly froze. She was laughing and filling her plate with the take-out food Viper and Bain brought. It pissed him off, a surge of jealousy and possessiveness leaking from his veins. Why wasn’t she as happy when alone with him?

He walked into the room, all conversations silencing and eyes turning toward him. He was used to the stares because of the way he looked, but not from this crowd. His assumptions made him more volatile.

Priest glared at the men as he filled a plate with food with exaggerated force. He was going to just take his plate to go, when she said his name, stopping him in his tracks.

He turned his attention to her, waiting for her to continue.

He ground his jaw together. “Bring your food.” He was too hungry to think straight right now and didn’t want any extra company.

Priest led the way to his room, Cleo following close behind him. When they were both inside, he closed and locked the door. No more sudden interruptions from Boss’s henchmen.

He set his plate on the dresser and crossed his arms. “What is it?”

She swallowed hard, sitting on the side of his bed. Those puppy dog eyes stared up at him, pure innocence and raw sex appeal mixed together. “I want to talk. I need to talk.”

Did she want to break up with him? Was he in fucking high school now?

“I don’t know. A lot of things. Everything. About what happens next. Why Boss sent more reinforcements. And about last night.”

“That’s a lot of topics. You ask your questions because I need to eat.” He grabbed his plate and ate standing up.

She picked at her food. “Were we supposed to share a room? I mean, are we together or was last night a one-time thing? I’m not good at this, and I’m not sure where we stand.”

“You’re acting like you’re insecure about our relationship,” he said.

“Yes, that’s exactly how I’m feeling. Do we even have a relationship?”

“I don’t know, Cleo. You tell me. You’ve been giving me the cold shoulder, but you looked happy a few minutes ago.”

“What? Are you talking about Boss’s men? I don’t care about them, Priest. You’re the man I slept with last night and the one I’ve been falling for the past few weeks.”

He shouldn’t be in this deep. Cleo was messing with his head and his heart. It was dangerous for a man like him. Why was his heart racing like he was a schoolboy?

“Just tell me the truth. Do you want to be with me or not?”

He put his food aside and walked over to the bed, taking her hands so she had to stand up. “Cleo, I told you I consider you mine. That’s not a line. Not a game. How do you feel?”

“Well, this isn’t exactly how I wanted things to go down. I’ve been humiliated in front of you because of Boss, and now he’s sent backup because he thinks I’m incapable of taking care of you. Do you believe that’s true?”

She shook her head. “Everything you did was for me, I know that. You put me first, so why would I judge you? I’ve never felt safer than I do when I’m with you, Priest.”

“They said there’s more to you than I know.”

She ran her palm up his chest and his entire body reacted. “Honestly, I think your boss found my birth parents or something. He left a phone in my room to call him, but I’m not interested. People don’t understand that sometimes the past needs to stay where it is.” 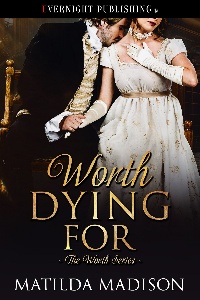 Worth Dying (MF)
Matilda Madison
In Shelf
$4.99
Tweets by
sirenbookstrand