Return of the Originals 6

Tormented and tortured by his adoptive family, Cage flees in the night with only his instincts to guide him. Destination? A human city, apparently. His confusion is cleared after a chance encounter with a man straight out of his dreams.

Mikkal Daggart was tired of being on the run. After being framed, he’d disappeared, waiting for the right moment to prove his innocence. The best place to hide? A human city. Only trouble seems to follow him everywhere and after saving a strange man’s life, Mikkal knows his hideout is no longer safe. Not that it matters much, he has bigger problems. They go by the name of Cage.

Was this a second chance to regain something Mikkal had thought lost forever? Will Cage find out just what had always been different about himself? Will finding answers help the two broken men mend their hearts and build a happier future?

Return of the Originals 6

Carrying an unconscious, bleeding man home was not one of Mikkal’s wisest choices. Even with the late hour, he was still living in a city that seemingly never slept, and he gathered more than one wary look thrown his way, even with mostly keeping to back alleys and once or twice, jumping over some dead ends. His unforeseen cargo had not even stirred, and if Mikkal couldn’t hear the human’s…and that was odd, Mikkal could swear the guy was not human, but at the same time he couldn’t recognize the scent signature and if not for the faint heartbeat, he’d have thought the guy was dead. In the middle of their journey, he’d started snoring, though, so Mikkal figured the guy was just a bit banged up if he could sleep so deeply while upside down and being jostled all over town.

He wanted to take the window route and not attract attention from his neighbors by carting the unconscious man in, but that idea was rendered moot when John was waiting, patiently pacing in front of the building, pharmacy bag in one hand, take out in the other.

“I was ready to put an APB on you, man. But then again, I don’t know how we could have explained this situation away.”

Mikkal nodded, though he had no clue what the human was talking about. He needed to watch some TV these days and pick up some more human lingo. Living as a council member for the better part of his long supernatural life had not really prepared Mikkal for blending in the human society.

“What are you standing there for? Inside before my colleagues feel obligated to arrest both our asses.”

John rolled his eyes and stepped aside, and Mikkal quickly made his way to his apartment. As if by design, he was barely in sight of his door that his burden started to groan and fidget.

“What do you think I’m trying to do?”

John got the door, and they both rushed in as the fidgeting escalated to full-out trashing around.

“Hey, take it easy. I’ll put you down, all right?” Curiously enough, the guy had not uttered a sound, and at Mikkal’s voice he froze, body tense as a board as Mikkal carefully deposited him to his not-so-stable feet, arms still around the guy’s waist to catch him in case the wobbling degenerated to crashing to the floor. Not quite his usual behavior, he couldn’t help but notice. Mikkal didn’t do fluffy worrying. Except now he seemed to be doing it. John’s amused snort was not welcomed either.

He forgot to be annoyed when his rescue finally raised his head and looked straight at him. The guy’s eyes seemed to sparkle with emerald fire on his pale skin framed by almost inky black hair. He stood unnaturally still, expression frozen but still somewhat distrustful and Mikkal couldn’t breathe. He couldn’t think, was surprised to be still standing. Those eyes, that smell. Mikkal knew them as he knew himself.

He was just standing there. Why wasn’t he saying anything, why wasn’t he speaking or doing anything? It was as if…as if he didn’t know Mikkal, and Mikkal felt his heart beat fast with hope while breaking at the same time.

“Wait, what? Your Nigal? The one you told me is dead?”

His hand clutched and squeezed. His body almost panicked at the idea of being separated for even one more second from his mate and his cat was silent, so silent. He gathered the man closer to him, needing—

His body jerked as if hit and his mind reeled. He’d noticed that Nigal was unresponsive, but until the moment he heard that small, terrified murmur voicing incertitude and confusion, Mikkal had not realized that the body he was holding was not only frozen but stiff and slightly shaking. Nigal was afraid.

How could it be him? His mate was dead.

His hands were cold but strong as they grabbed onto Mikkal’s wrist and held on. Mikkal felt the touch like a brand, and he was almost sure he saw the flicker of a flash where their skin collided. He felt a bit light-headed and the shock of the last couple of minutes made him plain dumb, so he was still staring into those sharp eyes and apparently not capable of speech. He hoped the muffled hearing wasn’t a sign of imminent blackout.

Mikkal took a deep breath and one by one, unclenched his fingers, forcing himself to step back and release Nigal. If it was him.

Niga…the guy wasn’t trembling anymore at least. Apparently not being touched by a lunatic not capable of ordinary means of expression helped.

Mikkal had started spending more and more time in the depths of the jungle than in the village and Nigal thought soon, soon he’d be ready to choose Nigal and their future. He didn’t want to put his mate in that position, but it was what it was. The people there would die and turn to dust and Mikkal and Nigal would still wander the earth. It was the difference between Nigal and now Mikkal, and the seasonal humans. Though it wasn’t that simple, and humans had some advantages, too, but still. It didn’t concern Nigal, Mikkal, and their connection.

So for the moment, Nigal dreamed of their future while watching his mate steadily edging closer, his eyes blown with lust and red-faced. Oh yeah, Nigal wanted, so he leaned and took. First, he reverently touched his mate’s wet shoulder, glistening water warming on the flushed skin, their bodies reacting to the closeness between them and the rush of blood muting the sound of churning water all around. The moment they collided, everything seemed to stop, and Mikkal’s eyes widened in shock. It felt like they were made of melding energy, and the places they touched burned with it. Nigal was shorter than his mate, the perfect height to teasingly bite at a nipple, feeling his mate’s manhood twitch against his belly with something more than surprise.

Nigal was an equal opportunity lover, so he knew his way around a cock and he could hardly wait to show his mate all his expertise, everything until now just a training exercise for this very moment. For his other half. He pushed Mikkal backward until he felt him hit the ledge and abruptly sit on it. He laughed at the slightly disgruntled expression, knowing that his mate was well aware of Nigal’s trickster disposition by now and more than that, matched him.

The ledge was positioned perfectly for Nigal to nestle closer, their cocks aligning as their arms went around each other, fingers mapping every inch of skin they could reach. The friction was building, each movement and adjustment teasingly dragging sensitized skin on skin, their gasps loud and breathy in the stillness of the jungle. Nigal thought he’d never seen a more gorgeous sight than his mate in the throes of pleasure, head thrown back as Nigal was working both their cocks, squeezing and teasing until they both felt ready to go insane.

Water sloshed around them, hiding most of what was happening from Nigal’s hungry eyes. He resented not seeing everything, but at the same time, the ripples felt like a velvet cradle massaging them. He got closer still, too close to keep on moving his hand between them, but it was okay, they could just dance with their bodies, painting wet trails on one another. Mikkal made a low noise of frustration and Nigal smirked in response. His mate was a firecracker, not leery about making his desires known and that was a gift in itself. Nigal had long ago tired of being worshipped or feared. He pushed closer still, wedging his cock under his mate’s, the head bumping periodically at the base of the hanging sacs before tunneling further, dragging through hot skin until Mikkal adjusted his position to get him exactly where he wanted, and Nigal moaned, his cock twitching as he almost spilled right then. His cockhead rammed repeatedly into the wrinkled skin, wetness making it slicker but not diminishing the burning feeling, catching once in a while slightly, making both of them shiver with want.

Nigal wouldn’t do it like this. He wouldn’t mate Mikkal on an impulse without the other man being completely aware of everything it entitled. Still, the temptation was there. It would be so easy to work a couple of his fingers in that tight hole, stretch it and use it until Mikkal felt empty and needy and he craved the completion only Nigal could bring him. Not today though.

Their relatively controlled pace got frenzied and animalistic after another nudge, Nigal pushing harder than intended, his cock catching on that wrinkled skin again and again until Mikkal groaned and arched, cock trapped between their bellies where he couldn’t reach it. Not that it seemed to matter as just a second later Nigal felt a telltale heat spreading along their bellies, and Mikkal groaned his name like a prayer as he let himself drop behind, his legs open, his body debauched and all of him spread for Nigal’s pleasure. It didn’t take more than seeing his mate like that and Nigal was coming, too, his control sketchy as his claws emerged and slightly pricked Mikkal’s hips where Nigal was holding him still. His mate didn’t seem to mind it if the resulting mewl was to judge by and Nigal let himself relax, his exhausted and drained body collapsing on its own on top of his mate’s.

Mikkal laughed against his skin, the joyful sound like light to Nigal’s soul.

“Marking your territory, kitty? I think all the animals of the jungle know it now, don’t worry.” 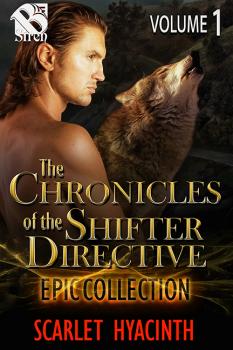