Married to Ian and Alastair Wyndham, Serena was happier than she’d ever been.

She knew it was difficult for Ian and Alastair to deal with her dark visions, and relied on their strength to get her through them.

Determined to find the kidnapper and rapist she’d seen in a new vision, she relied on their help and that of their handler from a secret government agency.

Ian and Alastair knew that Serena’s visions, her ability to see future events, and her ability to read the minds of people around her were all very much a part of her.

They’d learned how to bring light to her when darkness threatened to overwhelm her.

But someone else, someone from her past sent her into a turmoil.

They admired her strength in facing him, but it cost her, and only their love could make her whole again. 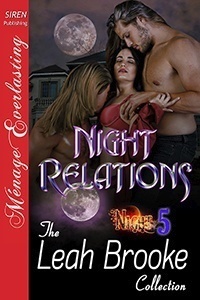 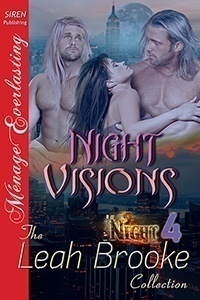 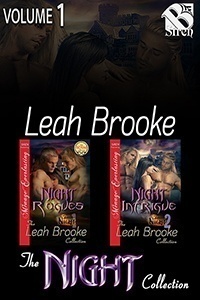 Disconnecting, Alastair tucked his phone away and carried the suitcases to the master bedroom, surprised to find Ian and Serena standing by the window deep in conversation.

Frowning and alert for trouble, Alastair set the suitcases just inside the door. “Is something wrong?”

Ian appeared intrigued at whatever they’d been talking about. “No. Just a theory we need to test. Coming to the gym with us?”

“No.” Approaching Serena, Alastair loosened his tie. “Jonathan called. He was watching for us to fly in. He needs to see me, and it sounds urgent.”

Serena frowned and stepped closer, flattening a hand on his chest. “He—”

She paused, stilling in the way she did whenever she had a vision.

After just a few seconds, she took a breath and lowered her hand with a nod. “Women are being kidnapped. Women with wealthy husbands. Huge ransoms. If they tell anyone, he’ll kill their wives. It’s people we know. Louise Tanner was first. Two months ago.”

Ian ran a hand down her back. “What happened?”

“He paid ten million dollars in diamonds to get her back.”

Alastair raked a hand through his hair, remembering that Edwin Tanner was a jeweler. “Jesus! Was she hurt?”

“He raped her. Over and over.” Serena sniffed and wiped a tear away. “He’s one of the waiters from a catering company. These rich people have it all and don’t even see him. He’s going to get money from them and take the rich, stuck-up women. Rape them. Make them enjoy it. He’s got toys. Sex toys that he’s learning how to use.”

She wrapped her arms around herself as if chilled, and he could already see the headache forming. “When he lets them go, he’ll see them again at parties. Functions. All those fundraisers and get-togethers the rich people enjoy. He’s there. Working. He can watch them. While he’s holding them hostage, he wears a mask and lets them see his eyes. After he releases them and sees them at parties where he’s working, they’ll see his eyes and know that he not only raped them but made them enjoy it. But they won’t know for sure. And when he’s rich enough, he’ll be able to have his pick. And one by one, he’ll use them.”

She took a steadying breath and moved away from both of them, a sob escaping. “He kept her for four days.”

Shaking her head, she held out a hand to keep them from touching her. “No. Wait. I need to see.”

Alastair fisted his hands at his sides, hating that she lived horror after horror.

It infuriated both of them to watch her suffer, but they’d learned that they had to give her the room she needed to experience the visions that were so much a part of her.

They could be there, though, to light as much of the darkness as they could and to give her the support she needed when she became overwhelmed.

She took another deep breath and let it out slowly, a sign of her need to settle herself before continuing. “Deborah Miser was next.”

Ian reached for her, dropping his hand when she shook her head and stepped back again. “Hell. Is she all right?”

Turning away, she stared out the window, and Alastair suspected that she saw nothing outside. She rubbed her temple, a sign that her headache had gotten intense. “He did the same thing with her. He demanded money be sent to an account. It was faster. He got the money faster. Another ten million dollars. She’s back home with Thomas now, but they’re both devastated.”

Serena turned to him, including both of them in her tense smile. “He’s afraid to ask for more. He doesn’t know how much money the rich people have, and he’s afraid that someone is going to tell him that they don’t have that kind of money. He doesn’t want to negotiate.”

She stiffened again, her eyes going wide, her features deathly pale. “He’s picked out the next one. Oh, God. He’s taking her now. Mary Jenkins. I can’t see where they are. It’s blurred.”

Alastair had had enough. Snaking an arm around her, he pulled her against him. “Enough. You’re white as a ghost, and you’re shaking.”

Ian ran a hand over her hair. “Alastair is going to meet with Jonathan and get more information.”

He bent to kiss her temple right above the spot that she rubbed. “Although I can’t imagine that Jonathan has gathered as much information as you have.”

He sent Alastair a look. “Tell Jonathan what she knows. I don’t give a damn if he believes her or not.”

“I will. Get her out to see the dogs. They always cheer her up.”

Alastair grimaced when Serena shivered, picturing each of the victims in his mind, remembering how happy they’d appeared the last time he saw them. “We’ll get him, baby. We’ll find Mary.”

Straightening, she nodded and turned to Ian. “I agreed to your self-defense lessons because I saw us together in the gym. Now, I’m really sure. Something about your training helps me.”

Shaking her head, Serena frowned. “I don’t know. There’s something missing, and until I figure it out, there’s a big hole. It’s not all connected. I need to figure it out before I see him.”

Ian stiffened, gripping her shoulders and holding her at arm’s length to see her face. “See him? You’re not getting within a mile of this guy.”

Serena’s took another deep breath. “Yes. I will. After we rescue Mary, he’s going to try to kidnap me.”

Serena used her knees for leverage to move on his cock, gripping his shoulders and arching to thrust out her breasts for his attention. “Let’s.”

She couldn’t resist spurring him on. Gripping his hair, she moved faster on his cock, taking his mouth with hers, pouring all the love and passion she felt for him into her kiss.

Lifting her head, she smiled to see that her kiss had clearly affected him. “Let’s see who can make the other crazier.”

His eyes had darkened even more and softened with emotion, while his hands moved on her body with the desperation of a hungry man who couldn’t get enough. “I’m going to fuck you senseless.”

Smiling at Ian’s guttural tone and raw promise, Serena moved up and down on his cock again, clenching on his thick length. “Ditto, darling.”

Ian’s eyes flared again, and with a groan, he held her to him with a hand spread on her ass and toppled her to the sofa. “Let’s both get senseless.”

Serena gripped his shoulders, crying out when he withdrew almost all the way and then plunged into her again. “Usually do.”

He took her hard and fast, only to slow, dragging the pleasure out.

He knew her body well.

He knew just how to touch her, just how hard and fast to thrust to give her the pleasure that had become familiar but always exciting.

From the first day, the intimacy between them had grown, becoming profound and fulfilling, and she found herself striving to make it even deeper.

Leaning back, he went to his knees between her thighs, holding her up with a hand under her ass while his thumb moved over her clit. He stared down at her, his arrogant smile widening as her cries of pleasure became more desperate. “You’re so fucking beautiful. Come for me.”

Frustrated that she couldn’t reach him, she gripped the sofa cushions and rocked against him, groaning in frustration when she couldn’t get him to move faster.

Her clit burned beneath the deliberate slide of his thumb, her pussy filled with every slow stroke of his cock.

Pushing herself up, she clenched on his cock and reached under her thigh to cup his balls and gently caress them. “You first.”

Ian groaned, sliding his powerful thighs beneath hers to support her weight while slipping his hand from her bottom and around her to caress her breast. “Not fucking likely.”

Serena knew that she’d roused the beast inside him, reveling in her ability to do so.

His thrusts came faster, his thumb moving steadily over her clit in a decadent assault to her senses. Moving his other thumb over her nipple, he hovered over her. “My wife.”

With a hand braced on the sofa behind her, she smiled and continued her own caress. “My husband.”

Taking her wrist, he removed her hand from his balls and lowered her to her back again, still caressing her clit, his body bowed over hers, allowing him to kiss her while he continued his stroking her. “I love you so fucking much.”

He took her mouth with his again in a searing kiss, a groan rumbling from deep in his chest to wash over her.

Holding on to him, she dug her heels into his tight ass and cried out, cries he swallowed while drawing even more from her.

Her body tightened, the heat exploding in a rush of sensation and raging through her.

Ian groaned again and surged deep, slipping his hand from between them to gather her tightly against him. “That sweet pussy’s milking my cock.”

Feeling his cock pulse his release inside her, Serena smiled and held on tight when he lifted her and settled her on his lap again.

Even in the throes of passion, he was always careful of his size and just how easily he could hurt her. “Hmm. You came first.”

Closing her eyes, Serena smiled against his shoulder. “I always do.”

“Yep.” Running his hands up and down her back, he pressed his lips to her hair. “It’s a sign of my self-control, baby, because there’ve been times when just the sound of your voice makes me hard.”

Lifting her head, she smiled and sank her fingers into his hair, staring into his eyes. “You think you’re not romantic, but you say things that just make me melt inside.”

Serena leaned into him and touched her lips to his. “Your words are just fine. I’m going to go up and get my robe. I’m hungry, and I’m dying for pepperoni pizza.”

Wagered to the Duke (MF)
Karen Lingefelt
In Shelf
$0.99