Daxar Althos walked around the freighter, scowling at the poor shape it was in. “Couldn’t you find anything uglier or was this their worst?” The damn thing had so many pieces soldered to its hull that it looked like a patchwork quilt of metal scraps.

Nyk grinned as he reached down and petted the dog that had been thrown in with the deal. The dang mutt looked just as patched together as the ship. He was black with splotches of white over his fur. He followed Nyk around like the moons of Sator rose and fell on the guy.

“You need to take that mutt back,” Dax groused. “He’s probably got fleas.”

“What?” Nyk asked as he straightened. “You don’t like Patch?”

“You named him?” Now it was going to be impossible to get rid of the mutt. Nyk always did have a soft spot for animals. Sometimes to a fault. The guy hadn’t met a creature he didn’t like. Dax had a feeling that dang dog wasn’t going anywhere. What was with the ugly Earth pet anyway? Why the hell did the dog keep trying to lick himself in the balls?

“Well, I can’t just say ‘Hey, you.’” Nyk threw a toy and Dax watched as the dog ran and grabbed the thing and brought it back, only to have Nyk throw it again and the process start all over. He didn’t get it. What was the goal of this game? The dog just basically ran in circles.

“If he’s going to be sticking around, he needs to learn how to repair a cargo ship.” Dax held out a wrench to Patch, but the dog ignored him. As a matter of fact, he growled at Dax. Tucking the wrench into his pocket, Dax growled back.

“You two are real comedians. I find it ironic that you’re complaining about what I bought, when it was you who sent me to get a cheap ship.” Nyk scowled at them both. “Everyone’s a critic.”

“I said cheap, not worthless,” Dax replied. “It looks like every ship in the galaxy took a shot at it and then someone slapped a piece of metal over each hole.” What in the hell were they going to do with this thing? It was too big to be a paperweight. Maybe Dax could toss it out into space and Patch could fetch it.

“Are you two going to stand here arguing all day?” Logan asked. “We already have orders to fill.” He gazed over the ship and shook his head. “I’m not piloting that death trap.”

“How did you even get it here?” Dax asked. “A tractor beam?”

Nyk stabbed a finger toward Dax. “Next time you can go ship shopping. I got it for a steal.”

“More like highway robbery,” Logan commented. “If you paid over one credit, that was too much.” He took a sip of whatever he was drinking and then smiled. “At least we don’t have to worry about anyone trying to swipe our cargo. They’ll think we’re hauling scrap in this piece of shit.”

“See. Logan already sees the potential in it.” Nyk grinned as if he truly believed the ship had some sort of use.

Dax could only shake his head. “We’ll need a damn good mechanic to get this thing operational. I checked the bridge and someone stole the flight console.” They’d also taken the fuel cells and every important piece of equipment needed to fly this thing. Even the galley stove was missing. What in the hell had Nyk been thinking?

Dax could only blame himself. This was their first business venture and he knew that Nyk wasn’t very good with ships. Nyk knew how to work the weapons station and could run preliminary flight checks, but his piloting skills weren’t up to par. Whenever they went out on missions, Dax tried his best to let Nyk pilot so he could sharpen his skills.

It was one of the reasons Admiral Shuziano had always paired them together. Nyk had turned out to be a top-notch Breed Assassin, but he had never passed his flight classes.

“It’ll take a miracle to get this thing up and running,” Logan said.

“And more credits then we paid for it,” Dax added.

“I’m starting to get offended,” Nyk said. “You just might succeed in hurting the one itty bitty feeling that I have.”

There was nothing itty bitty about Nyk. Dax stole a covert glance at his best friend, feeling guilty for wanting Nyk in ways he shouldn’t—ways that could destroy their twenty-five-year friendship. If Nyk only knew the thoughts Dax had about the man…

Dax had seen how friendships could be ruined when sex got involved. He wasn’t willing to risk what he and Nyk shared. For years he’d been fighting the attraction, settling for a soft touch here, a subtle brush of the fingers every once in a while. Sometimes being around Nyk was more than Dax could bear.

His best friend gazed at him with those gorgeous green eyes that were filled with defiance over his purchase. “You that mad?” Nyk asked.

Dax could never be that mad at Nyk. The guy sometimes pissed him off, but never would he turn his back on Nyk. “It just wasn’t worth it, Nyk.”

A guarded expression fell over Nyk’s face. “I can’t return it. All sales are final when dealing with junk dealers.”

“So you did get it from a junk dealer,” Logan said.

Dax wasn’t sure he was doing the right thing. Not at all. But he couldn’t stop himself now even if he wanted to. Nyk was fully hard and wanted this just as much as Dax did. Come morning, Dax might regret shattering their friendship into a million pieces. Come morning he might even wish he could take back what they were about to do. But at this very moment, Dax couldn’t find it in himself to pull back the reins and examine the situation. Not when he was rock hard and all logical thought had abandoned him.

But he had a feeling…No, he was positive that, come morning, he would still feel the same way he felt now. That this was the right choice. That this was meant to be. No one in the universe understood Dax the way Nyk did. No one.

Nyk was the one. He had always been the one. No matter who Dax had fucked over the years, secretly, he had always pretended his bed partner was Nyk. That may be selfish, and it more than likely was a bit callous, but it was the damn truth.

It hadn’t always been like that, not sexually at least. He had cared for Nyk since the day they’d met and he could sense the vulnerability in the little boy. They shared a close bond of friendship until Dax had later discovered that his preference leaned toward males.

Still, he hadn’t thought of Nyk as anything more than his best buddy. It wasn’t until Nyk’s first assignment, when his friend had stayed up half the night vomiting because he had to kill someone that something inside Dax had shifted.

That had been seven years ago. And since then, a deep, heartsick yearning had gripped him, shook him, and hadn’t let him go. Dax knew there was no one else out there for him. Not when Nyk was right at his side. Always at his side.

And now Nyk was going to be his mate. It seemed right, fitting. The man already owned Dax’s heart and soul. There was only one more step and that was taking Nyk physically. To his surprise, this felt as natural as breathing.

Dax ran his hand over Nyk’s bare hip, smoothed it over his muscular thigh. His breathing picked up because this was Nyk, the real thing, not a fantasy he was playing out in his head as he fucked a stranger. Nyk was lying under him with a timid smile, hesitation in his green eyes, and he was all Dax’s.

The line between friend and lover melted away, faded in the dim light of the room as Dax’s hand mapped out Nyk’s body. The rigid lines, dips and curves, the hard muscles and the softness blended together so perfectly.

He scraped his fingernails over Nyk’s side, used the callused pads of his fingertips to trace the deep valley of muscles along Nyk’s abdomen, and palmed one hard pec, pinching one nipple until it peaked.

“You are a torturer,” Nyk moaned.

Dax wasn’t trying to torture Nyk. He wanted to drink in every inch of exposed skin, to memorize the man’s body. He hadn’t waited all this time to rush through this. He wasn’t mounting, but mating. There should be gentleness, exploration, and even some fun.

Dax straddled Nyk’s waist, careful of his weight. He was nearly twice Nyk’s size and didn’t want to crush the guy. His ass rested over Nyk’s thighs, their cocks staring at each other. Dax’s was darker, thicker, while Nyk’s was lighter, longer.

He was tempted to rub them both off. Nyk’s shaft jerked as clear liquid leaked from the head. Dax focused on Nyk’s upper torso. He wanted his best friend mindless before he went near his cock.

Using the palms of his hands, Dax brushed them over Nyk’s peaked nipples, teasing them, watching as the skin grew even tighter. He grinned when Nyk shuddered. “You’re a skin person.”

“I like touching…and being touched.” An almost-boyish grin appeared on Nyk’s face and Dax’s heart pounded in his chest. This was the man he’d fallen in love with. The shy Nyk. The vulnerable Nyk. The I’m-not-sure-what-I’m-doing-but-I’ll-follow-your-lead Nyk.

“I’m not stopping you.” Dax’s palms skimmed over Nyk’s biceps, down his hairy arms, and over the backs of his hands. He gripped Nyk’s right hand and lifted it, placing it on his chest. “Touch me.”

Nyk started to lift the left one, But Dax stopped him. “Let this arm rest.”

Nyk nodded, chewing on his lower lip as his fingers grazed over Dax’s pecs. They’d touched many times, subtly, but never like this, never with such care and consideration. Clear liquid from the tip of Dax’s cock began to pool onto Nyk’s lower abdomen as his best friend, his lover, his soon-to-be mate took his time.

“How can you be so hard and soft at the same time?” Nyk asked as his fingers glided over Dax’s stomach. “It’s amazing, like touching silk over steel.”

Nyk’s hand dropped lower, hesitated for a hair’s breadth and then his thumb swept the clear liquid from the head of Dax’s cock. Nyk gathered the moisture before shoving his thumb into his mouth, licking until there was nothing but saliva left on the digit.

“Keep that up and I’m going to make you eat it for real.”

Nyk’s eyelids lowered until his eyes were mere slits. “Is that a challenge?” He slid his finger over the pre-cum and tasted it again. 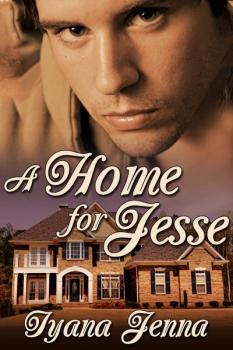