Uncovering and divulging an outlandish conspiracy will put a hard bump into any journalist’s career, and Armin can only blame himself when he’s dispatched from Frankfurt’s skyscrapers into the depths of rural France on the unglamorous job of writing about a cobbing workshop.

Natural building is messy, dirty, and sweaty work, but it has its consolations. For example, Van, the greying but undeniably hot master cobber teaching the workshop. Sure, the man is a hopeless tree-hugger, with embarrassing notions about ancient folklore and religions, but he’s still worth a week-long fling, right?

When Van is revealed in all his majesty and power as a long forgotten forest god, however, the week-long fling might well become entangled with eternity, on the edge between life, death, madness, and immortality. 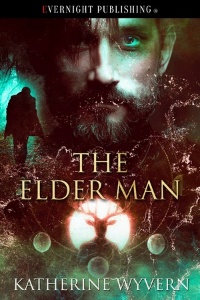 Armin started undressing there and then and pulling at Van’s clothes.

“Um, can I brush my teeth at least?” asked Van, laughing.

Van found himself dragged bodily toward the bedroom. He was still wearing his jeans, which were unbuttoned and sliding down to his knees. He couldn’t stop laughing.

“Okay, okay, I’m right here,” he said between kisses. He tried to either shed his trousers or hold them up so as not to fall flat on his face on the hard stone steps, but he didn’t manage to do either because Armin was all over him like an octopus.

They finally stumbled up the corridor and through the bedroom door and into the bed, and Van found himself pinned down with his ankles tangled in his jeans and Armin’s hand in his crotch, inside his boxers, and his head lodged awkwardly between two pillows.

“Look, honey,” he said, “I’m all yours. But I need to … let me…” He writhed about under Armin’s panting body and finally managed to kick off those damn trousers and then get rid of his underwear.

“Shit, things were easier when we wore nothing but a loincloth and a bit of paint.”

Armin sank his face into his neck, laughing.

“You say these stupid things all the time. Like you are twenty thousand years old or something.”

“Shut up,” said Armin, kissing him deep and long, rubbing the front of his body on Van’s. Armin was buck naked and already hard and ready.

Goodness me, what have I done to this young man? he thought.

Van had a passing recollection of the day Armin had arrived, so downcast and subdued and almost paralyzed with shyness. He smiled in the dark and arched to meet Armin’s body, feel his cock on his own.

Van knew that if he got another rough ride like yesterday, he’d need painkillers to get through the next day.

He was on fire to love Armin again, to share everything, every ounce of flesh, to the bone, and if it had not been a workshop week, he’d have let himself be fucked blind again and spend the day in bed tomorrow, come hell or high water.

But with the last day of the workshop looming, he thought this eager young buck needed to be steered in a different direction.

Hell, am I really growing old? he thought. He didn’t feel old, least of all with Armin’s quick young body in his arms, but perhaps he was not quite as supple as he used to be. That’s the trouble with a middle-aged human body. Damn this mortal flesh.

“Would—you—let me…” he whispered in brief bursts between hungry kisses, and he ran a finger deep in the crack of Armin’s butt. The young man arched into his arms, his back quivering.

“Yes,” he said, half word, half breath, before pushing his tongue into Van’s ear, as if words were not enough to express his longing.

“You can suit yourself if you like,” Van whispered, lying down flat on his back, inviting Armin to straddle his body.

“Oh, I like, I like a lot,” whispered the young man, smiling and palming Van’s cock to gauge his erection.

He was quite happy to fuck or be fucked, but he had never done both with the same man. He was amazed and enchanted and almost a little humbled. Jonas had been an absolute bottom, and it was at least two years since Armin had had anything in his ass not made of steel or silicon.

He fumbled around, switched on a bedside light, and opened that little surprising drawer again. He rolled a condom down Van’s cock and slathered it with lube.

Armin kissed him and stroked Van hard again and lowered himself by degrees onto his lap, moaning softly as that warm, slippery living glans parted his ring by degrees and then slithered inside his body, such an intimate intrusion that he almost wept with emotion. It was so easy to fuck and be fucked that one could easily forget what an incredible disclosure of love and trust it could be. He took a long breath, and another, pleasure and pain and emotion clashing for an almost unbearable minute. Then the pleasure washed over him in mounting waves at every careful, deepening thrust as he filled himself with Van’s length and his own cock grew stiffer and bounced softly on Van’s stomach. After the crazy hurry and urgency of just a few minutes earlier, he had to pace himself, give his ass time to adjust around the girth of Van’s cock, and move slowly, with infinite tenderness, for himself, and for Van. It was really, really difficult.

Van seemed quite happy though.

“Oh, honey,” he said, dreamily. He lay quite flat, his arms over his head and a lazy smile on his lips.

He was not so much fucking him as letting Armin take his own pleasure out of him, offering himself to Armin’s need. Armin wondered if he was always so … not submissive exactly, but giving.

He went a little crazy inside as he worked his ass in waves and tight circles on Van’s hard cock, rooted onto his body, spread wide and full inside and hard in front, all at the same time. It was so much pleasure all at once, almost too much, and yet still not enough. He wanted to say something absurd like, Take me hard, please yourself, fuck me like a whore, but he had never gotten the hang of delivering dirty talk with any panache, and the mere thought made him laugh a little. Van stirred and smiled tenderly, caressing his thighs and gently digging his thumbs at the base of his cock, kneading, so that Armin’s erection stiffened and rose a little higher.

“Nothing,” said Armin, but he was still smiling, delirious with happiness.