The Magic of Love (MFM)

Elvinia Caladh hates being a princess and wants out from her controlling brother's shadow. She wants to travel to other kingdoms and have an adventure.

Camran Mag Aoidh has wanted Elvinia since the first time he saw her. He knows she doesn’t want to get married but he’s determined to make her his. When another suiter comes along, Camran must convince them both that a menage marriage is the only option to give them all what they desire.

Odhran Stiobhard goes to the kingdom of Marak to negotiate trade agreements with the king. He is stunned when a small violet eyed woman runs out in front of his horse. He decides to court her and is shocked to discover that she is a princess. When Camran suggests they both marry her, he doesn’t know if sharing is something he can do.

Elvinia finds herself out of her depth, Camran and Odhran must come to her rescue before it’s too late.

The Magic of Love (MFM)

“Knucker,” she called in a calm and soothing voice. She might trust him, but she didn’t want to startle him either.

The big green dragon lifted his massive head and huffed out a greeting. She could just make out his large form and red-rimmed eyes in the darkness.

“Would you like to go for a fly?” she asked him.

Knucker huffed out a breath that Elvinia took as a yes when he lifted his great body and started to make his way out of the cave. Elvinia walked out of the cave to avoid getting trampled and looked at the reaction on Camran and Odhran’s faces as Knucker appeared behind her.

He was a magnificent creature that still awed her after all these years. That emotion was mirrored on the men’s faces as they stared at her dragon. Knucker looked down at them with interest in his black red-rimmed eyes.

Elvinia could tell by the posture in her dragon’s body that he was on alert, but didn’t feel threatened. If he did, he would have arched back and shown his teeth, growling and huffing. Luckily, he was just standing behind her with narrowed eyes, half his body remaining in his lair.

“Knucker,” she said, “these are my friends, Camran and Odhran. They have come to meet you. Please be nice to them. They are important to me.”

She wasn’t sure why she felt she needed to tell her dragon that they were important, and she didn’t want Camran and Odhran to get the wrong idea, but she felt it needed to be said, so Knucker knew to at least try and like them. He would ultimately make up his own mind though.

Knucker huffed out a response that she wasn’t sure what it meant. He hadn’t tried to eat them, so that was a positive.

“Nice to meet you, Knucker,” Camran said with a bow.

“Hello, Knucker,” Odhran added. “You are the most amazing creature I have ever laid eyes on. Your mistress wasn’t wrong when she said how special you are.”

“We wanted to go for a fly,” Elvinia said, walking closer and patting him on the neck. “Do we have your permission?”

Knucker lowered his big head to the ground, giving his consent for the three of them to climb onto his large back. Elvinia smiled and patted him again before climbing onto his leg and swinging her leg over his neck. She scooted back along his emerald green scales until she was seated at the base of his neck where it met his body.

The men climbed onto the dragon and settled themselves with Odhran in front of her and Camran behind her. Camran wrapped his arms around her waist and pulled her closer to his lap. She could feel his hard thighs against her bottom.

Odhran grabbed the large protruding spikes just in front of him. Elvinia did the same and called to Knucker that they were ready to go. Knucker walked forward until his huge body was outside the cave. He stretched out his wings and flapped them once, twice, and they were lifting off the ground and into the air.

Camran’s arms tightened around her waist as they soured higher. She smiled to herself as she felt him stiffen against her back. She knew that flying wasn’t for everyone, but she was honored that he had given it a try. Queen Jessica hated to fly and only went up on Nughogg, Elvinia’s brother’s dragon, when completely necessary.

“This is amazing,” Odhran yelled out as Knucker swooped and twirled through the clouds.

Camran let out an unmanly scream when Knucker dived down towards the lake below. He pulled up just before he hit, and with a sideways turn, he skimmed the water with his claws.

Elvinia let out a giggle at his playfulness. When he lifted into the air again, Elvinia closed her eyes as the cold air rushed past her. She loved being in the air, all her worries left behind. She never felt so free.

Odhran was having a ball too. She could hear his laugh and wished she could see the delight on his face. She felt bad for Camran who was having a terrible time behind her. Knucker wasn’t going easy on him either. He dipped and turned, diving and lifting as they flew at a fast pace.

“That’s enough now,” she called to Knucker. “Time to head back.”

Camran’s sigh of relief was loud in her ear.

Knucker made his way back to the cave with no less enthusiasm, and it wasn’t long before they were on solid ground. Camran climbed off his back with a speed that Elvinia thought was impressive. Odhran and Elvinia followed and walked back to their mounts.

She thanked Knucker for his time and for allowing them to ride him. He huffed in reply and went back into his cave. She turned to Camran who was already on his horse.

“Are you okay?” she asked. He looked a little green to her.

Camran took off, leaving them behind, and Elvinia looked at Odhran with concern.

“He’ll be okay,” Odhran told her. “Obviously not his idea of fun.”

They mounted their horses and followed Camran back to the castle. Elvinia was worried for him. He didn’t look at all well when he had taken off. She knew that he might not want her to see him that way, but that was too bad.

Camran sighed in relief. Their plan was to win her together, and they couldn’t do that if she sent one of them away.

“Good,” Odhran said. “Because I wasn’t going anywhere. We are in this together now.”

“In what?” Elvinia asked, looking confused.

“We are courting you, Princess,” he replied. “What did you think we were doing?”

Whatever Elvinia was going to say was cut off as Odhran slammed his mouth down on hers. He kissed her wildly as Camran sat quietly and watched. When Odhran palmed her breast, Elvinia pulled back in shock.

“No,” she replied. “I was just taken by surprise. Please keep going. I want you to touch me as a man does a woman.”

Odhran took her lips once more, and his hands softly caressed her mounds. She moaned and the sound made Camran’s dick hard.

Camran liked that Elvinia was a woman that knew her own mind. He knew that this was wrong and they shouldn’t be touching her intimately until they were wed, but since they planned to marry her anyway, surely it was okay. Elvinia certainly wasn’t pushing Odhran away. She had her arms wrapped around Odhran’s shoulders, clinging to him.

Camran moved in behind her, and leisurely untied the laces on her dress. When they were loose, he slipped the dress off her shoulders, exposing her smooth back to his gaze. Odhran would be able to see her delectable breasts. A sight that Camran couldn’t wait to see for himself.

He kissed his way down her spine until he heard Elvinia’s raspy, breathless voice.

“That feels so good,” she said.

Camran moved back to see her dress pooled around her waist and Odhran playing with her nipples. He pulled and tweaked once while he sucked on the other.

Elvinia did as he asked, and Camran lifted her skirts and disappeared underneath. Odhran moved over to give Camran room. He spread her thighs wide and wished he could see her little pussy, but it was dark under the thick material of her dress. He caught her musky scent as he moved closer to his prize.

He gently ran his fingers through her hot lips and over her small clit, making her jump beneath his touch.

“Your pussy is wet, baby,” he told her. “You like having your nipples played with?”

Elvinia was a demanding little thing. Camran lowered his head and licked her from the bottom of her pussy to the top. He swirled his tongue over her bud before sucking gently. She cried out and bucked. Camran placed a hand on her hip to keep her still as he worked her to a frenzy with his mouth.

She panted above him, and spread her legs wider. He entered her with one long finger and guided it in and out. He paused when he came across the barrier of her virginity. She was untouched and innocent, which Camran already knew, but this just confirmed it.

He was honored that she would let them be her firsts. It was a gift that he would treasure always, and he wanted to make the experience the best he could for her. He didn’t want her to have regrets later.

He licked and sucked as he added another finger, scissoring them inside her, stretching her barrier to lessen the pain when it came time to break it. His cock grew even harder, desperate to feel her warmth around it.

“Shh,” Odhran replied. “Camran will give you what you need. Make her come, Camran.”

Camran wondered if she even knew what she needed. Did she play with herself and bring herself pleasure? Did she know what wonders he could bring?

Camran kept up his ministrations until she was moaning and begging. She writhed under his touch, and her channel clenched on his fingers. He thrust into her once, twice, and flicked her clit with his hard tongue.

Elvinia cried out. She tightened around his digits even more as Camran felt her orgasm claim her. He worked her pussy until she settled, giving her a small kiss on her mons. He crawled out from beneath her skirts and looked up at her.

Her face was flushed and her chest rose and fell with her rapid breathing, causing her breasts to bounce. She looked well and truly satisfied, and he smiled arrogantly to himself. He wanted to bring her more pleasure and show her just how good it could be between them.

Camran looked down at her. Did she know what she was asking? Camran wanted to make her his world and give her everything her heart desired, but she had to be ready and know what it meant. 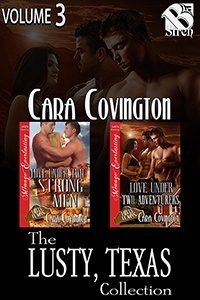