The sound of a bike engine humming quietly behind him made him turn. He finished locking up just in time to see the bike being parked on the curb. The metaphysical leopard inside him stirred to life, and both Noah and the cat scented the air.

The telltale coppery scent of blood combined with the heady smell of feline musk made him snarl. The rider was a female cat shifter, but fuck, even though his warning bells were ringing, she smelled so damn sharp. Sharp and fine.

The female rider wasn’t wearing any helmet. She dismounted stiffly, throwing one booted and denim-clad leg off the machine. Noah was betting underneath that form-fitting leather jacket she was hurt and bleeding, but he couldn’t help but notice what a body she had.

She was tall, slender, but had all the right curves Noah wanted in a woman. She also had nice hips and tempting, luscious breasts. As she came underneath the harsh street lamp, Noah could see more of her.

Her dark hair was plaited to a single braid, and when she directed her smoky gray eyes at him, his cock perked up in his grease-stained jeans. Her face was all sharp angles and lined with a number of piercings. Noah could see ink peeking from her neck and her hands.

Every inch of her screamed bad and wild, and all that wildness called to him. It lured his leopard out into the open.

Hunger stirred inside of him, alien and unsettling. Noah always knew he loved both men and women, but after finding and claiming Mason as his mate, he’d never hungered for anyone else’s touch again. Except hers. Noah didn’t just want to touch. The dominant cat inside him wanted to caress, possess, and claim.

Fuck. Just who was this woman?

“I’m looking for Lars Marsden. Someone told me I can find him here.”

Gods, even the sound of her voice tightened things inside of him.

“Who’s asking?” Noah crossed his arms, trying to think with his head and not his prick.

Noah narrowed his eyes at her. “Believe me, sweetheart, the last thing I want to do is screw you.”

She surprised the hell out of him by not lashing out at him. Her lips curved into a smile. Her very kissable and fuckable lips, Noah decided.

“Your dirty little cock says otherwise, darling. I can feel your leopard straining to rub itself against mine.”

“Has anyone ever told you have a dirty mouth on you, woman?” Noah growled.

Questions raced through his head. Was this woman related to his new king? He didn’t like this one bit. The woman standing in front of him was no submissive or weak cat. She wasn’t exactly a leopard queen, but he had a feeling she was damn close.

“You have no idea what I can do with this dirty little mouth of mine.”

“I’m not going to ask you politely again, woman. Who are you, and what are you to Lars?”

She met his gaze coolly and steadily. Noah was annoyed as hell he wasn’t able to read the expression there, because he could usually read most people.

“I don’t have time to play fucking twenty questions, asshole.”

She was walking away from him, which wouldn’t do. Noah was done being patient. He stepped toward her direction, drawing on his supernatural reflexes. In seconds he had her body pinned against him. She was fighter, he’d expected that, but Noah didn’t expect her to fight dirty.

His hands closed on one of her wrists, but he didn’t see the blur of her elbow ramming into his gut.

Being one of the pard’s enforcers, Noah had taken worse hits. He grunted, closing his hands on both her wrists this time. He must’ve weighed twice as much as her, and all of the extra weight was muscle. She twisted, kicked, and fought against him like a rabid animal.

Noah tightened his grip on her.

“Settle down, sweetheart. I’m not going to hurt you. I just want answers.”

She snarled back at him. Her gray eyes were still narrowed, but she stopped moving after realizing he was simply just holding her. This kitten’s used to danger, to fight or flee. Just what kind of life has she led?

Noah decided he wasn’t being fair either, by demanding answers from her, so he went for the truth.

“My name is Noah, Noah Winters. I’m one of the enforcers of the Leopold pard, and I just want to know what you want with our king.”

“King?” She sneered, sounding half amused and half incredulous. “No one makes a black panther their king unless they’re fucking kidding around.”

There was also a deep-seated bitterness in her voice Noah had to wonder about. It told him she knew Lars on a deeper level than he’d initially assumed.

“No one’s kidding around. He may be an odd choice, but he’s the right one. The pard bonds between him, our queen, and our consort make us strong. You don’t feel like you’re connected to any pard, so you don’t know what it’s like.”

The woman sagged against him, and he could smell her hurt and vulnerability on much different level.

Guilt rammed into him at the sound of her soft voice. Damn. The last thing Noah wanted to was to hurt her on an emotional level.

“And I don’t fucking care.” Strength returned to her voice and her body. When she pushed him back furiously, he let go of her.

He evenly met her challenging gaze, not speaking. Noah waited for her to speak first, to explain herself.

Finally, she let out a frustrated breath. “I just want to find my damn brother.”

Lex shivered as the pads of his fingers traced one weeping lotus curling down her left breast, right to the tip of her nipple ring.

Mason wasn’t sure where one design ended and another started, but he thought he could spend an entire day tracing the colorful swirls and lines on her body over and over again.

“She’s pierced, Noah. She has these lovely matching little rings on her navel and tits,” Mason breathed, angling his head so his tongue could flick at the hardening bud.

It was a curious experience working his tongue against the metal, and when he tugged the ring with his teeth, Lex let out a groan against him.

“I had a feeling she was pierced, Mason.” On the side of him, one of Noah’s hands lashed out to finger and play with one of Lex’s untended nipples. Another sudden tug made Lex let out another groan, and the sound made Mason’s needy cock unbearably steel hard.

“Are you pierced below, too, you dirty girl?” Noah whispered against her ear.

Her stormy gray eyes were wild and alit with pleasure as they focused on Noah. “Come find out.”

Shit. This woman was going to be death of them, Mason thought, but it didn’t stop his hands from unbuttoning her tight denim jeans and jerking the zipper open. Those ratty jeans were begging him to rip them off, but since he had a feeling Lex wouldn’t appreciate it, he made do with sliding them down her lovely long legs.

“No panties, too?” Noah asked, one hand sliding down the curve of her buttocks.

“I was in a rush. I didn’t exactly have time to fish for panties.”

Mason detected a hint of defensiveness in Lex’s tone, but the last thing he wanted was to spoil the mood. With Noah still holding her body captive, Mason went on his knees and eagerly parted her legs.

There was one intricate, winding dragon curling down her left inner thigh all the way to her ankle, its scales the color of alternating hammered bronze. On the other, a pair of cranes was in the midst of flight, lost in a sea of azure and jade colors.

Fuck, someday Mason was going to devote some time to taste and explore Lex’s body in a slow and leisurely manner.

Like Mason suspected, another matching piece of jewelry was ringed through her clit hood. Seeing the plain metal worsened the ache in his prick. It stirred the heat throbbing in his belly and insides.

Keeping her legs firmly apart with his body, Mason fingered the metal, and began to trace his way down her lovely pink pussy lips.

“Why would you ask Mason that, babe?” Noah asked.

“Most of the men I’ve been with aren’t interested in eating pussy. All they want is a quick and convenient fuck hole.”

Noah growled at that.

“Those weren’t real men, Lex. We’re going to show what it’s like being with real men who know how to appreciate their women.”

Before she could pierce the meaning behind his words, Noah captured her mouth with his. Mason observed while Noah kept her pressed against him, his hands kept hungrily crawling all over her body. The sight of his mate passionately kissing Lex made him more than eager to begin sampling her.

With his hands fastened on her inner thighs, Mason’s eager mouth unerringly found her clit. He closed his mouth over the swollen little nub, licking at the labia and occasionally applying suction to drive Lex mad with desire. Mason could feel her legs struggling and buckling against the pleasure he was eager to inflict.

Mason freed one of his hands and slipped them past her slit to find her tight little asshole. His finger began to lazily circle the puckered and thick ring of flesh.

One quick look above him showed him Noah, still fucking her tongue and playing with her nipples.

Mason felt her body jerk slightly as he slid his finger inside her ass. Lex’s words still reverberated through his mind. “All they want is a quick and convenient fuck hole.” If Mason had the power to erase all of her foul memories he’d do it in less than a heartbeat.

It won’t be easy taming a woman like Lex, but Mason and his mate was going to make sure she wouldn’t even think to leave after they’d showed her what it was like staying with them.

Mason slid a second finger in her snatch, while his mouth closed over her sensitive little nub again. He sucked hard, hoping to flood her body with sensations. He withdrew his mouth to tug hard at her clit ring. It was enough for her body to shudder, to finally explode. Mason eagerly lapped at her cream, making sure to catch every drop.

When he was done, Mason rose to see Lex leaning against Noah. The grin she gave him nearly melted his heart. “Fuck, Mason. You’re amazing.”

“Hell’s bells, woman you really need to clean that mouth of yours,” Noah muttered, still playing and massaging her aching tits.

Mason only lifted her hand and pressed her wrist to his lips. She looked unsettled by the gesture, as if she distrusted tenderness.

“Thank you, shall I return you the favor?”

Mason let out sound when her fingers curled around his aching shaft. “I want…” He hesitated and went on at her waiting expression. “I want to feel your gorgeous lips wrapped around my shaft, and I think Noah wants to fuck you.” 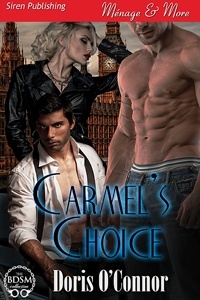