When Jessica Taren, working late, falls asleep at her desk, she wakes up to a shocking email... a naked picture of her handsome boss. As it turns out, all the jokes about him not being human turn out to be true. Only latent empath Jessica can do anything about it. Can she take on the shapeshifting half-Demon with her new found powers? 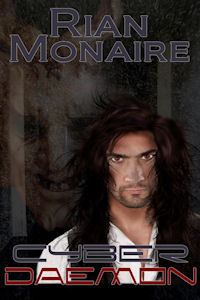 Oh, my fricking God. That's Mr. Zenusera. She fought to not shriek out loud. Unconsciously, she moved closer to the screen, attempting to focus.
Resplendent in his pixeled display, he was stark naked on a rumpled bed covered in sleek, royal-blue sheets that looked silky. His face was partly hidden by the pillow, but it was easy enough to make out his features.
Her fascinated gaze traveled over his sleek, tanned frame, and she couldn't help but wonder how many of her raises had gone to fund that gym membership. His body was perfect. Every muscle lay smoothly against the other, his lines completely symmetrical. Goddamn… You could bounce a quarter off that ass, she thought. The family jewels were relatively hidden due to his position, but she could almost make out an impressive set of cojones.
She had just enough time to wonder why in the name of God he would post a naked picture of himself from his own email when the screen flickered and then the windows closed. She tried to open it again, but she got a screen reading 'the network is unavailable' instead.
Well, that answered that question. He didn't. She covered her mouth with her hand to smother her sudden laughter, her impending headache pushed back by her humor. One of those bimbos he screwed was a bit smarter than the rest. Too bad they caught it early. I was probably the only one to see it.
Humming, she reached in the little cooler under her desk for a Coke. Coffee will have to wait. No sense letting the powers that be know about her overnight stay--or her free peep at the rather sweet fanny of Mr. Big. She'd probably get fired for not averting her eyes.
The acerbic sweetness was a godsend, clearing the film from her dry throat, though not doing much for her dental health. She tried not to imagine the enamel damage caused by this action. Must get a scrub in at some point, she thought.
Functional, if not refreshed, she once again buried herself in the incredibly boring drifts of murdered trees, plugged away doggedly until about nine, when the lack of sleep began to really pull at her. Yawning, she stretched, using the rounded top of her chair for resistance and listening to the cacophony of her spine. Good God, that's horrible. I'll be a crooked humpbacked crone any day now. She rotated her still-aching neck, grabbed her cell phone from the desktop and rose to hit the coffee machine. Just as she stepped away from her desk, Mr. Lathern appeared, glowering.
Christ, what does he want? The big boys never came down here. She straightened, attempting to look like she'd actually showered today. God, her breath must reek.
"Where are the Miller's Furniture and Barrow's Candy accounts?" he demanded.
Hello to you, too. "Right here, sir, all updated with the latest lines and coverage." She picked up the folders, holding them out.
He snatched them without a word and stalked away, tossing them on top of an impressive pile he already toted.
You're welcome.