Emily and the Priest

Her first year away from home at Catholic college has been a disaster for shy, awkward Emily, falling in with the wrong crowd, just trying to fit in with the other girls. When Father Mark, the campus psychologist, takes her under his wing, she’s more than grateful, and under his tutelage, Emily blossoms into ripe, luscious fruit, just ready to be plucked. By the time Father Mark realizes his mistake, it’s too late—Emily has fallen for him, and he for her. God help them both. 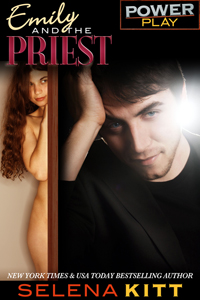 Emily and the Priest

“How are you doing otherwise? How are classes?”

She smiled at his interest. Father Mark was always so kind. “Good. Thanks for loaning me that book on Catholic Saints. It was just what I was looking for.”

“So are you going to tell me which saint you were researching?” He sat back, tenting his fingers and looking at her. Sometimes when he looked at her, she felt almost naked, like he was seeing not just through her clothes, but fully into her somehow.

He cocked his head at her. “Which one called to you?”

“Saint Lucy.” There was no point not telling him. She knew he’d get it out of her eventually. He had a way of making her want to confess things, even when she wasn’t in the confessional. He nodded, just waiting, somehow knowing she was going to continue, and she did. “She’s the patron saint of the blind. I had a dream that I was going blind.”

He raised his eyebrows. “Scary?”

“No, actually. I dreamed I was going blind, but I could see everything. I was just seeing it…from inside.” She glanced at him, seeing the quizzical look on his face. “It’s hard to explain.”

“I think I understand.” He leaned forward, putting his elbow on his desk, cupping his chin in his hand. She could see the dark hairs covering his forearm. “Do you know how Lucy lost her sight?”

“Yes. She plucked out her own eyes and sent them to the man who admired them.”

Emily shrugged. “Well, the book said it was because she wanted to give her heart to God, not to a man. So when her admirer said she had beautiful eyes, she plucked them out to prove that her beauty wasn’t external, and she was devoted only to God.”

“Why do you think she did it?”

“I think…” Emily looked up, meeting his eyes fully. “I think she was afraid.”

“Afraid? Of what?” Father Mark looked surprised. “Doesn’t it take a great deal of courage to pluck out your own eyes?”

“I think it was cowardice.” She bit her lip, watching his reaction. “I think she was afraid of love.”

Father Mark stood, coming around to the other side of the desk to lean against it in front of her. “But Lucy loved God.”

“Yes,” Emily agreed, looking up, up, into his handsome face. “But she was afraid of men. Of the way they looked at her. Admired her. I think she wanted to make herself ugly, so no one would notice her.”

He seemed to contemplate this, and she noted the way his gaze fell on her hemline, where she was playing with the edge of her uniform skirt.

“But God restored her sight,” he reminded her.

“Yes, and made her eyes more beautiful than ever.”

“Proving that no matter what you do, you can’t hide inner beauty.” He smiled, reaching out to tuck a stray strand of hair behind her ear. “You’re a very beautiful girl, Emily. There’s just no hiding it.”

Emily’s heart swelled in her chest, even though she knew she shouldn’t be feeling what she was. He was so close she could smell him, a clean scent, like soap, and something else, masculine and heady. She was intoxicated by his dark green gaze, fixed in her chair, all of their long conversations constellated in that moment, hours spent in this office talking about everything from school and her scholarship to one of the most prestigious Catholic girls’ colleges in the country, to her overprotective mother and her long-dead father whose image glowed like an angel in the distance of her memory.

“I don’t try to hide it with you.” She turned her face so his palm was cupping her cheek, relishing the touch of his skin against hers. Was this really happening? “You make me feel beautiful.”

“You are. You really are,” he whispered hoarsely, his thumb moving along the line of her jaw, sending little shivers through her.

“I love you, Father.” Emily turned and kissed his palm, eyes closed, breathing in his scent, her confession bubbling up without thought. “I love you.”

The silence stretched between them and she didn’t need to open her eyes to feel his shock, she could see it clearly enough with her eyes closed. But he didn’t move his hand from her cheek, didn’t withdraw. Instead, his hand moved down to her shoulder, his finger moving along the sensitive area of skin over her collarbone, tracing it under the open V of her blouse. She held her breath, waiting, hoping, praying, not daring to move.

“Emily…” He whispered her name and the sound was heaven. “Oh God, help me…”

He kissed her and the sensation carried her skyward. She wrapped her arms around his neck, reveling in the hot press of his lips, the way he gathered her to him, pressing his hands to the small of her back so her hips met his under his robe. There was no mistaking the hard steel of him pressed against her pelvis.