“I never noticed your dimples before. They’re kind of sexy.”

Jenna Henson tenderly caressed his handsome face. Her hand drifted from his high cheekbones to his square jaw, across his impossibly broad, muscular chest and flat abs to the tantalizing red-gold hairs peeking out just above his scanty cock-covering before pulling away. He was always so busy swinging his electric sword at alien invaders week after week that she had never really had the chance to note just how firm and tight his butt cheeks were and how enormous his bulge in front was beneath his leather loincloth.

Even after recording and replaying each episode of Galactic Guerillas a thousand times Jenna had never been inspired to envision her hero in such intimate, vivid detail. Damn! Her mind was really playing tricks on her. What the heck did she eat last night? Spicy tacos? Usually they gave her heartburn—and nightmares—so that couldn’t be it.

Whatever created this dream, she prayed she’d never awake.

“You are as kind as you are lovely, my dear Jenna.” Prince Reglund of the Galactic Council of Interstellar Knights gallantly kissed the back of her hand. His rich, deep baritone shot shockwaves of excitement through her. “But you still don’t believe I’ve come to your world or that I’m actually lying here with you.”

Jenna propped herself up on an elbow and raked her eyes across his virile form. The man was absolutely, positively, drop-dead, hope-to-die-tonight gorgeous. A specimen of male perfection—even if his mother Princess Lurda from the water world of Odelot had been forced into marriage to his father, Bart Crator, an evil warlord bent on ruling the known universe with an iron fist and plasma torpedoes.

“It’s not that I don’t believe you, Reg—I can call you Reg, can’t I?” He nodded his approval. “It’s just that I’m too much of a realist to think my over-active imagination capable of fashioning a real live flesh and blood man to fool around with in my bed. My mother has warned me since I was a child that I watch too much TV, and someday I will lose touch with reality. I guess today—or tonight, rather—is that day.”

Jenna sighed loud and long and punched her pillow. “My mother is so going to love telling me, ‘I told you so.’ I hate it when she does.”

“Believe? Heck, I know I’m insane. You’re a fictional character from my all-time favorite television show. I’m having a conversation with you and wishing you’d make passionate love to me.” She shook her head and sighed again. “If this isn’t insanity, I don’t know what is.”

“Not allowing me to make passionate love to you would be insane.” Reg chuckled. A devilish gleam flashed in his honey-flecked eyes as he tossed his long, golden mane over his wide shoulders. “Why not trust your senses? Can you feel this?”

His agile hands danced across the curve of her hips, penetrated the crevice of her thighs and fingered her swollen clit beneath her nightshirt. Jenna moaned and wriggled closer to the wondrous touch of her dream lover.

He lowered his full lips to the points pushing through the baby-blue satin material, teasing her nipples into hard peaks until she cried out for him to stop the sweet torture.

“Good. Now do you believe that I want to make love to you?” 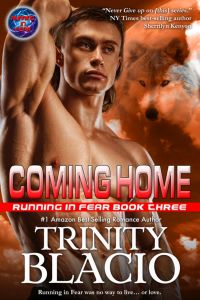