After an asteroid collides with his spaceship, killing all others on board, astronaut Frank Rimmer cryogenically freezes himself to await rescue. When Frank wakes up, he's greeted by a pair of rescuers resembling pin-up girls from his crewmate's calendar. The girls who rescue him are aliens who can project images into Frank's mind and appear as he would like to see them. Sister-clones Mahla and Shahla tell him they sincerely want to learn more about human beings and their mating rituals. They study "unofficial files" onboard and ask Frank for his help in understanding human sexuality. Can Frank help these two gorgeous angels experience an erotic cultural awakening?

At first the derelict spacecraft appeared lifeless. Then sensors picked up one slow heartbeat. Mahla mentally altered the ship’s course, steering toward the icy chunk of rock, a small moonlet of a gas giant orbiting a class two star.

Her multi-tentacled shipmate floated onto the bridge to quiz her about their abrupt change of plans. Shahla’s thoughts intruded her consciousness to the exclusion of all others.

Why did you alter course? We are expected at the conference on Nagala in less than two time cycles. It isn’t good to frustrate the Hive Mother. She will be angry.

Of course she will be angry, Mahla snapped back at her sister-clone. Hive Mother is always angry, but she did tell us that we were on a goodwill mission. If that battered piece of metal contains an injured being, it would bring much prestige to the Hive if we saved its life.

Good thinking. I leave the rescue operation in your able appendages.

Shahla glided over to the bio-signs console and scanned the data with her visual tendril. The heartbeat is most unusual. What if the being is a life-form unknown to us? Many species find our appearance quite shocking. Shall we do a mind probe first to determine its origin and mental status?

Yes. You are most wise. Can you attempt a mental link with the occupant while I ready our ship for docking?

Mahla readied the ship’s thrusters to slow their orbit to match the other vessel’s speed.

It will be a pleasure. Shahla downloaded the biological information streaming now from their scan. I enjoy discovering and contacting new life forms.

Frank Rimmer’s last memory before he shut the lid on the cryo-coffin was one of frustration. Complete, utter, pissed-off frustration. Why the hell didn’t Lupitz spot that asteroid barreling at them before it was too late? Ten good crewmembers had been sucked out into the vacuum of space by the impact near the main engines, and twenty more had died from radiation burns within an hour. With only a minute of breathable air left, Frank had switched on the ship’s auto-distress signal and crawled into a cryo-stasis chamber.

It would months—strike that—years before any Earth vessel would be able to locate and recover the crew’s frozen remains. He included himself in the body count. No one really knew how long a human could stay in a cryo-stasis chamber without turning into an unrevivable icicle. He hated the idea of being the first guinea pig.

As the cold slowed his vital functions, his mind wandered. Stasis was like an endless sleep. Pleasant, not horrible, but rather predictable. If this was all there was to the afterlife, he could get used to it, especially if it included angels like those twin girls on the calendar Lupitz had hung up in the mess hall.

Now those two ladies were something out of this world. Beautiful platinum blondes, they possessed tits the size of watermelons and asses and hips with more curves than should be legal on a female. Of course the women crewmembers had protested, but then they got their own beefcake calendar, hung it up in the rec hall, and declared a truce.

Man, if he ever got out of this refrigerator, he’d look that pair up and take them out for a wild night on the town in hopes of enjoying plenty of blonde pussy. Then the three of them could settle down on a nice polygamous planetoid somewhere and raise a whole colony of blond kids. It would be heaven.

His wish was granted.

Crewman Rimmer, an ethereal voice sang out. We are here to help you.

Who are you? Where am I?

He must be frozen. He couldn’t open his eyes, or move, or speak, but somehow he was carrying out a conversation with a disembodied voice. Make that two voices. One resonated a bit lower than the other, but both sounded heavenly.

Who we are isn’t important at this time, the second, lower voice intoned. You are on your ship in cryo-stasis. We are accessing the extent of your injuries and repairing the damage to your ship’s hull. When we feel it is safe, we will fully revive you.

Damn! I wish I could see you two. Are you from Earth or one of the outer planets? Nomadic space miners from the asteroid belt? How do you know my name? What are your names?

A pause, the length of a long sigh, and then, My name is Mahla, said the lower voice. We are not from Earth. We learned your name and what happened to your ship and crew by probing your unconscious mind.

In the process, said the higher voice, we awoke you from your deep stasis sleep. Forgive us.

That’s okay, he replied. I was getting bored. And your name is?

My name is Shahla. I am healer and bio-scientist. Mahla is pilot and engineer.

Pretty good combination there. Are there any more on your ship?

No, there are just the two of us, Mahla communicated. Unlike your kind, we do not require many individuals to run our vessels.

Frank felt something tugging on his leg—the leg that had received a mass of metal splinters when the bulkhead outside of engineering collapsed. His lungs seem to be breathing again, too.

We don’t need lots of crewmembers to run our ship, either, Frank thought, trying his best to impress the female-sounding voices. But it does keep the monotony of space travel to a minimum when you have a few friends to socialize with. Ow! There was a sharp pricking sensation and then the discomfort eased. What are you doing to me?

Repairing your injuries, Shahla informed him. I regret if my healing causes you pain. You will feel better soon.

He hated being rude to his rescuers, but it was a bit odd having a conversation without being able to see their faces.

Losing It Two at a Time (MFF)
Michelle Graham
In Shelf
$2.99 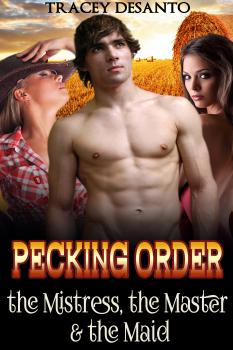 Pecking Order: The Mistress, the Master & the Maid
Tracey DeSanto
In Shelf
$2.99

A Ring for Christmas
Adriana Kraft
In Shelf
$1.99