His Road to Sam (MM)

His Road to Sam (MM)

More From Shifters of Mystery 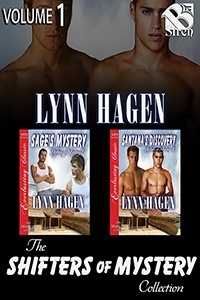 Well, Pat hadn't expected this. Not only had Sam turned into a werewolf, but he was the biggest one Pat had ever seen—aside from his friend Monterey. Sam's teeth were long and sharp, his ears short and pointy. His neck was so thick it would take six of Pat's hands to wrap around it.

And Sam was staring directly at him.

“Uh, down boy?” Pat began to move backward until he was tucked against the wall. It was good to see Sam on his feet, but this wasn't what Pat had in mind.

“Ya think?” Pat asked. “Not only was he forced to change, but he's pissed as hell, confused, and downright dangerous. Not moving is the only smart thing to do.”

Although he and Sam had been into each other, Pat wasn't sure how much sway he held over the man. The sheriff had been gone for months, tortured, and now he stood there as a vârcolac. Pat would be pissed as hell, too.

“You're safe,” Pat said to Sam. “No one is going to hurt you here, Sam.” He wasn't even sure he was getting through to the sheriff. The werewolf snarled at everyone, his claws out, his mouth opened to show-off his razor-sharp teeth.

“Not sure he understands you,” Jeremiah said. “We need to tranquilize him.”

“Don't you dare!” Pat snapped. “He's been through enough already. What we need to do is gain his trust.”

“I'm pretty sure that isn’t happening anytime soon,” Sage said. “He's not right in the head and more than likely doesn’t recognize any of us. Martin screwed him.”

“You're still not shooting him with anything,” Pat argued. He'd be damned if Sam went through any more pain. He and Sam might have argued the last time they saw each other, but he cared deeply for the sheriff and would do anything to protect the man—even if Sam currently looked at Pat as a snack.

He wasn't foolish enough to think that everything would be okay. They had a long road ahead of them. The scars would heal on the outside. It was the ones on the inside that worried Pat the most.

“Do you understand me, Sam?” Pat asked as he stared at the angry werewolf. “Do you know who I am?”

“Yep, he remembers you,” Jeremiah said. Pat glared at his friend. “What?” Jeremiah didn't seem the least bit apologetic. “You do know how to piss someone off.”

“And I'm going to really piss you off if you keep talking,” Pat warned before he turned his attention back to Sam. Pat's eyes widened and his breath froze in his lungs when Sam started stalking toward him.

“No.” Pat shook his head even though his heart was in his throat. “Sam needs me.”

Pat tilted his chin outward when Sam stopped a foot from him, the werewolf's muzzle almost touching Pat's chin. Pat would admit that he was terrified. His body shook and his throat grew bone-dry.

“You did this,” Sam said, his voice rough and raspy, accusatory. The hatred in Sam's eyes was tangible. The sheriff wanted someone to pay for what was done to him, for the nightmare he'd suffered through.

“No.” Pat shook his head. It might have been because of Pat that Sam was dragged into this world, but he wasn't going to let Sam place the blame at his feet. “I had nothing to do with this. We rescued you.”

A grumbling growl vibrated in Sam's chest. The sound was something a person heard in a horror movie. It was eerie, low, and held so much promise of death. “Liar.” That one word rumbled like a threatening storm on the horizon.

Pat gasped when Sam's lethal hand wrapped around his throat. Sage jerked forward, but Pat held his hand up, telling the others to stay away. He could feel Sam's claws pressing into his skin. “I'm not lying,” Pat said. “I would never do anything to hurt you, Sam.”

Sam's hand span over Pat's neck and his fingers lay against Pat's cheek. If Sam squeezed, Pat would be dead. That should be enough to try and get the hell away. Pat should tell Sage and Jeremiah to take Sam down. But there was a part of him that had faith in Sam, that knew his sheriff—although angry as hell—wouldn’t hurt him.

Taking a huge change, Pat pressed his palms into Sam's chest, smoothing his hands over the soft fur. “I know he hurt you, Sam. I would give anything to make him pay, to take away the pain that he's caused you. I'm not the enemy, Sam. I swear.”

Worries of what Sam would do once he'd gotten enough sleep plagued Pat's mind. The sheriff had already admitted to hating him. That admission alone had Pat tossing to his right side, stuffing the pillow further under his head.

He stilled when he heard a grunt. He currently had his back to Sam and didn't know if the man had woken up. Pat was too nervous to turn around and check.

The bed squeaked, the springs protesting. Pat curled his hands under his cheek and waited with baited breath to see what Sam would do. Hopefully he wouldn’t jump out the window again. His feet were still recovering from the broken glass he'd stepped in the first time.

The window held plastic in place of glass, compliments of William and his fastidious work. Sage's mate fussed over the house like he'd built the damn thing himself. But Pat was grateful.

Something hard hit the floor. It sounded as though Sam had dropped to his knees, but Pat couldn’t be sure. As badly as he wanted to turn around, to see what was going on, he didn't want the sheriff telling him how much the guy hated him again.

The first time had wounded him deep enough.

Pat shivered when a hot hand slid up his side. He shook as he tried to curl into a tiny ball, soaking in the heat from Sam's hand. When Pat finally turned his head, he saw that the blue in Sam's eyes had bled into one solid, brilliant color. They burned with desire and seemed to be alive. Pat was pulled into them, mesmerized at just how beautiful they truly were.

“Was there something you needed?” Pat asked. His breathing became ragged with Sam's need. It was tangible and spicy and was beginning to consume Pat. He should be afraid. Pat should be terrified at the ache that clawed at his skin. Sam dipped his head, his lips made of silk, his tongue exploring as Pat felt the man’s canines at his lower lip.

A shudder ran through Sam's body as his lips traveled along Pat's jaw. He had the distinct impression the Sam was holding back. The sheriff had gone through the change and Pat knew Sam would burn with lust. It was a given with vârcolac.

The man wanted pure, raw sex and Pat wasn't going to deny him. For too long he'd wanted Sam. This wasn't what he'd dreamt of when he allowed those fantasies to capture him at night, but Pat would take what he could get and give Sam what he needed.

“My sweet, Patrick.” Sam's voice was soft as he brushed his knuckles over Pat's cheek. Pat lay there like a timid little cat who was afraid of the big bad wolf. Which he was, but he wasn’t admitting that out loud. Sam's words were a contradiction to his earlier declaration of hatred.

Pat would take the kindness over the loathing.

At his touch, Pat became putty in Sam's hands. Pat arched his back, his body pulsing as he moaned. He wanted his pants off, but he didn’t want to break the connection long enough to remove them. He had never been so aware of his own pulse, the blood flowing through his veins. It was as if his body was no longer his own, but Sam's. It danced to the man’s touch, swayed to his lips, and hungered to be caressed by this man.

His lips traveled over Pat's throat, inhaling him, his canines scraping along Pat's skin. Sam's eyes blazed before he reared back and flipped Pat to his stomach, pinning him down to the floor. An animalistic growl ripped from the man’s chest. Pat shuddered and moaned as Sam's weight settled over him. Pat wanted nothing more than to get rid of the barrier of clothes.

“I'm going to fuck you.” Sam's words were growly and low.

Pat jerked backward, grinding his ass into Sam's groin. He understood nothing the man said and wasn’t going to bother trying to decipher it right now. Pat was too far-gone and would have agreed to be the man’s footstool just as long as Sam didn’t stop.

That said a lot about his control. It didn’t exist. Not when the heat of Sam's body was soaking into Pat, driving him insane.

His body jerked and quivered as Sam curled his fingers into the waistband of Pat's pants and then yanked them down his legs. Pat felt the cool rush of air slide over his ass. Now they were getting down to business.

A lightning bolt shot through Pat when Sam's hand slid down the crease of his ass. He tried to spread his legs in invitation, but Sam had him pinned. Pat struggled, but that only seemed to excite the guy. He released Pat's shoulder as his fingers formed a bruising grip on Pat's waist.

Pat bucked wildly, desperate to feel Sam's fingers deep inside of him. He cried out in frustration as he curled his fingers into fists. His chest crushed into his back, and Pat moaned at the skin-to-skin contact. But it wasn’t enough. He wanted more. He wanted hot, salacious sex.

Hell, he was begging for it.

Sam moved down his body and then pulled Pat to his hands and knees. Pat jutted his ass wantonly, begging to be fucked. His eyes went wide when Sam grabbed his hips and then bathed his ass with his tongue.

Pat cried out at the sensations and then felt Sam begin to change into his vârcolac form. That made Sam ten times more dangerous. It also turned Pat on. He didn't have to worry about Sam biting him. Pat was already a werewolf.

What he had to worry about was Sam unintentionally hurting him. The man's strength was unparalleled right now. He could crush Pat with—”Oh, god, yes!” Pat cried out when he felt Sam stretching him, his fingers scissoring inside of him.