In order to fulfill his father’s dying wish of him bathing in the Ganges, Raj Sohan leaves home. His wife, Melody, respected that enough to let him go alone even though she always wanted to see India. When he leaves, her heart breaks though she knows he is coming back. The day he is supposed to return, Melody Sohan gets the perfect idea to welcome her man back. 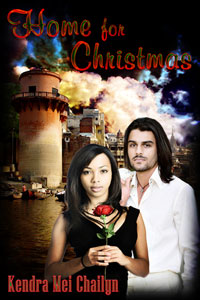 Raj took a long look at the suitcases on the bed. He swore he would stay at home, spend more time with his wife after his last trip took him away for three weeks. He felt as though he’d been ignoring his marriage for business—but this trip wasn’t for business. He made a promise to his father on his deathbed and it was a promise he couldn’t just go back on.

“You didn’t touch your breakfast,” Melody said from behind him.

He turned and smiled at her. Accepting the coffee Melody handed him, he kissed her before taking a sip and placing it on the bedside table.

“I’m sorry, hon. I wanted to eat more but for some reason my stomach wasn’t in agreement with my brain.”

“Now there’s a fight we rarely ever win.” She chuckled. “I packed you a couple extra traveler’s checks, just in case. You never know, right?”

“I know I promised you that I wouldn’t leave again for a while, but…”

“Babe, you don’t have to explain it to me. You made a promise to your father and I wouldn’t think very much of you if you went back on your word.”

“But you are my wife—and my allegiances are to you now. I made a promise to you, too—that I would forsake all others, keeping myself only to you. What about that pledge?”

Melody reached forward and dragged her palm down his chest to the waist of his pants. She eased to her knees, bracing her free hand to one of his suitcases and kissed him gently. “I respect and love you for thinking of me. But I know what this would do to you if you didn’t stick to your word. Now—stop being a baby and go do what you have to.”

Raj accepted the kiss and caressed her face. When she sat down again, he went back to the rest of his packing.

Silence filled the room except for the periodical sound of zippers. Once the bags were packed, he placed them on the ground, climbed into bed and pulled her against his body. Going away was hell on him every time. Raj hated leaving Melody behind. Most times, he would give in and take her with him—sometimes she told him to go without her because she said, “Sweetie, some absence makes the heart grow fonder.”

Raj kissed her head as his heart ached. He basked in the silence of just being with her with no expectations. But his peace was not to last for the doorbell peeled. Reluctantly, he allowed her away from him so he could climb off the bed. He grabbed his bags and watched as his beautiful wife slid his carry on over his shoulder. Together, they descended the stairs. He opened the door to hand his bags to the limousine driver and turned to face Melody.

Sadly, Raj held onto the woman that had been his wife for the past five years. She had loved him, protected him, gotten angry at him and then made up with him by making love. She had given him a wonderful home and shoulders to lean on when he felt he couldn’t go on. A few years before, his father had been diagnosed with an inoperable brain tumor. They told him that his father only had a few weeks, but Sajeev Sohan had shocked them all. A few months ago, the shock wore off and Sajeev died. The only thing the old man had asked from his only son was that Raj at least visit the Ganges in India. He didn’t even have to bathe in it, just stand on the banks and whisper his father’s name to the winds of a country he had wished to visit one last time before his death. 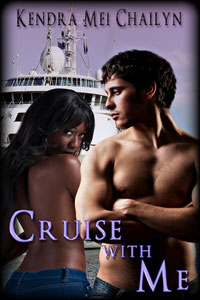 Cruise with Me
Kendra Mei Chailyn
In Shelf
$4.99