With green eyes peering out from beneath brunette hair, muscular arms from hours in the swimming pool, broad powerful shoulders, a well-defined muscled chest tapering to a narrow waist accentuated by ribbed abdominal muscles, and long powerful thighs, Kerry has the good looks and body to attract any man or woman. Hanging out in the hot San Diego sun one day, it isn’t long before a man offers him a ride to the beach, and his life is changed forever. 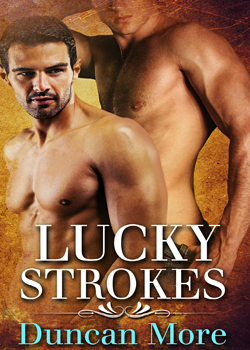 It was almost 9:00 when they arrived at John’s apartment. The setting sun and the brilliant red sky were being completely engulfed in darkness as they mounted the staircase that led down the outside walkway to Apartment 3C. John unlocked the door and motioned Kerry inside.

A small doorway led to what obviously was the bathroom, and straight ahead was the bedroom. Matching drab brown curtains covered the windows, and the place reeked of simple unadorned masculinity. No frills, no quasi-artistic decorations, just the basics.

“I think that can be arranged.”

“You got anything to drink?”

“There’s Coke in the refrigerator. Help yourself. Glasses are in the cupboard to the right.”

John walked into the bedroom, stripped off his tank top and threw it into the corner. He turned on the stereo and sat down on the bed to untie his sneakers when Kerry came into the room.

Kerry set the drinks down on the nightstand and awkwardly sat down on the bed. He was unaccustomed to having sex in a bed. He was used to automobile backseats and unlit grassy spots. Beds were foreign. He was even more shocked to discover that he was seated on a waterbed as a wave swayed his body. He had never been on one before and he liked the feeling of it.

John dimmed the lights in the bedroom and crossed around to the other side of the bed. “Don’t worry. As I said, I promise to make this last all night.”