Men for Hire 2 (Men for Hire) by Bella Settarra, Dylan McEwan, Helen J Perry, Tatum Throne - Romance>Anthology/Bundle
‘Men for Hire’ – that’s the name of Jennifer Archer’s firm in London offering people to do any job. What her clients get, in addition to skilled men, are some rather hunky specimens of the masculine race. When a man takes off his shirt and shows his pecs, can any man resist?
Subcontractor by Tatum Throne
Rough and ready cowboy Owen Murray is a Dom, who has taken a job as a handyman in England for a change of scenery. When the complicated renovation he’s working on gets a little too intense, he knows he has to quit before he makes one of the biggest mistakes of his life. Peter Crawford doesn’t advertise that he’s related to the Royal Family. When he falls for the hard-edged handyman renovating his country home, he knows he has to take a chance and become his submissive. Will his Dom love him in return or will he leave forever?
M/M BDSM Red-Hot Romance
Three's a Crowd...? by Bella Settarra
Callum sees his would-be boyfriend, Sean, drinking with handsome Tristan Makepeace and fears that Sean has no interest in him. Knowing Sean is a very adventurous lover, Callum worries that his own staid attitude has sent the Irishman in to the arms of another.
Upset, Callum leaves, but when his car breaks down, Men for Hire send Harrison and Abe, two hunky mechanics whose ‘roadside manner’ exceeds all Callum’s expectations.
After having the ‘ride of his life,’ ménage-style in the back of the mechanics’ van, an enlightened Callum returns to find Sean still with Tristan. Instead of feeling threatened, Callum now sees the handsome interloper in a whole new light…
M/M/M Ménage Red-Hot Romance
Wyndersham Heights by Dylan McEwan
When Jason inherits Wyndersham Heights, he has no idea how much it will change his life. He uses Men for Hire to employ a work crew to renovate the derelict mansion and can’t help falling quickly for the charms of ruggedly handsome, hunky foreman Ethan.
Ethan is older, wiser, more worldly, and introduces the boyish Jason to his first taste of BDSM.
But Jason’s troubled background threatens their budding relationship. What is the secret of Wyndersham Heights and will Ethan be able to help Jason let go of the past and embrace the possibility of a future with him?
A steamy gay romance.
M/M BDSM Red-Hot Romance
Four Days' Work by Helen J. Perry
It’s his first job for Jennifer Archer’s Men for Hire agency. Carpenter Craig is new to London and will be working alone with a gorgeous guy who sets his pulse racing. But is Todd gay or straight? They’ve got four days renovation work together for a sexy female client who has the hots for at least one of them.
After an acrimonious breakup due to his bisexuality, Craig is hesitant about coming out, but Todd makes all the moves when a new bed is delivered.
A humorous tale of men who aren’t afraid of getting dirty together on top of the dust sheets.
M/M Red-Hot Romance

More From Men for Hire

‘Men for Hire’ – that’s the name of Jennifer Archer’s firm in London offering people to do any job. What her clients get, in addition to skilled men, are some rather hunky specimens of the masculine race. When a man takes off his shirt and shows his pecs, can any man resist?
…………………….

Subcontractor by Tatum Throne
It was easy for Owen to see that Peter’s heart was hammering hard. His breath came in and out in short hard stutters. It was as though he had run a very long race and was finally coming to the finish line.
“You don’t want to do this with me.”

“What exactly are you afraid of?”

“I think you know exactly what I’m frightened of. You know that this isn’t a good idea.”

Owen pressed his palm against the wall next to Peter’s head. He looked him directly in the eyes, seeing the hazel blue of his dance with fear. “I’m a man who likes to make mistakes. I think you’re a mistake worth making.”

“Not going to happen.”

“Yes it is. Because I’m a Dom, and I’m going to make you my submissive.”

Laughter dance through Peter’s eyes but it quickly dissipated. “We are not doing this.”

“We can dance around this all you want, but it’s going to happen eventually. I know you want me.”

Peter closed his eyes as Owen lifted his hand to brush the back of his fingers across his jaw. A shiver raced through his body, and he moaned slightly. It was as though his mind was finally catching up with his body and he was going to accept what was about to happen. With his palm open, Owen smoothed the front of his hand down over Peter’s neck. He tightened his hold ever so gently, showing Peter he was in charge. Peter’s eyes flew open and locked with his. A gasp of surprise parted his lips. He wet them with his tongue nervously. There was something reallysexy about the way the man licked his lips. There was something innocent about the move, too. Peter was sexy as hell and didn’t know the type of effect he was having on Owen.

Owen leaned in close, pressing his lips against Peter’s ear. “You have no idea what you’re doing to me.”

Three’s a Crowd…? by Bella Settarra
Callum heard Abe’s deep chuckle right behind his ear, and it reverberated against his skin as the big hunk nuzzled his neck. Callum had never felt so wanted in his life. Both men were stroking and caressing him, and the fire in his belly quickly became an inferno. Abe’s massive cock dug into the flesh of his ass, confirming that he wasn’t exactly unaffected himself. Callum sighed as he heard a squelching sound and quickly reached down to grab Harrison’s dick. It was thick and wet, much like his own, and Callum could tell he was almost ready for his release, too.

“Okay, you win,” Abe conceded, looking down over Callum’s shoulder.

Harrison let out a whoop and gently but firmly pushed Callum to the floor. Callum’s mouth watered as he got a good view of Harrison’s dripping dick, and he licked his lips subconsciously.

Callum looked over at him—this time, it was his eyes that watered. He had never seen, let alone felt anything as humungous as this guy’s tackle. He didn’t even know they made condoms that big!

Harrison sat astride Callum’s chest, his weeping dick hovering just in front of the guy’s face. He totally obliterated the view of Abe, but Callum could feel he was there all right.

“You’ll have to spread a bit wider than that,” Abe told him, as Callum bent his knees, his feet at either side of his heaving body.

Wyndersham Heights by Dylan McEwan
Jason suppressed a small smile. “Yeah, that’s a good idea. I like the sound of that,” he replied, pleased that the room was too dimly lit for Ethan to see that he was blushing. He took one of the fish cakes and started munching on it. “So what do you want to watch?”

“Whatever you like so long as it’s available on Netflix or iPlayer,” Ethan replied, also taking one of the fish cakes.

“Netflix and chill, eh?” Jason laughed. What the hell am I saying? “Sorry. I didn’t mean… Not that I wouldn’t want to just that… Shit, I’m hopeless at this!”

Ethan leaned over and kissed him on the cheek. “You’re adorable. If that was an invitation, then I accept happily!” he told him. “I usually make the first move, but I didn’t want to risk losing my job if I’d misread things.”

Feeling as though his heart was beating hard against his ribs, Jason flushed and shook his head. “You didn’t misread things at all,” he assured him. “I really fancy you. I thought I’d blown things, though, being so emotional.”

Ethan gave a soft smile and kissed him on the lips briefly. “Eat your food. You’re going to waste away to a shadow if you don’t have a decent meal soon. And you’re going to need your energy later,” he told him. “I’ll choose a film to watch.”

Jason chuckled and took another fish cake. He was actually genuinely hungry now. He washed down a mouthful of fish cake with a swig of porter that tasted a little of coffee and chocolate and got himself comfy.

“This is one of the best gay romantic comedies I’ve ever seen,” Ethan said as he put on The Men Next Door, positioning the laptop on the suitcase. “It’s wacky hilarious. I quite fancy Mark Cirillo, who plays Woody.”

“Oh, he’s funny! He once did a TV commercial with TED the bear,” Jason commented. “Did you know that he’s the great-great-great grandson of Ulysses S. Grant?” Ethan bellowed and shook his head.

“No, I didn’t know that. Are you full of odd what-the-fuck facts like that?” he asked as he settled down close beside the other with his beer and the carton of curry.

Jason gave a bashful smile. “Yeah. But I only share them when I’m nervous,” he replied.

Four Days’ Work by Helen J. Perry
“I know it’s a camp, gay, disco frenzy in my toolbox but that music is fun to work to, and everyone likes it. Even when you’re working with old-timers.”

“You’re prepared for everything then.” Craig was impressed.

“Not quite. There’s no washing up liquid in here. But apart from that, I’ve got condoms in my pocket, and I’m ready to go.”

That got more of Craig’s attention than it should. Of course, Todd didn’t mean literally to use now. Nice though that thought was. Straight men use condoms too and sexual innuendo through the day is normal banter among many workers. A camp disco while they worked and tea on the go was a promising start with his new companion.

“Before I get the kettle boiling though, I am going to slip into these. I want to at least look like I’ve been working when she gets back. You get the music going.”

Todd wasn’t going to wear the coveralls over his clothes but instead of them, naturally, when it was this hot outside. Cool baggy cotton overalls with nothing underneath made sense.

He lifted up the T-shirt that fitted him like a second skin and pulled it over his head, Craig’s eyes registered the defined abs and chest revealed below and found himself staring, sucking in a bit more air than was normal in a work setting. He averted his eyes and concentrated on breathing normally. In, out, slowly, don’t pant, don’t stare, don’t even look, he told himself.

From the corner of his eye, he could see Todd carefully folding the top and placing it on top of the toolbox, just about the only clean place in the room. He then bent down to undo his boots.

“Are you single, Craig?”

Craig raised his eyes from the floor and skimmed up to see the unbuckling of a belt and fly. Todd looking back at him, waiting for a reply.

“Um…” Don’t sound like a fool, don’t let him know that you are nervous just because he’s undressing. “Yes.”

“You hesitated, aren’t you sure?” 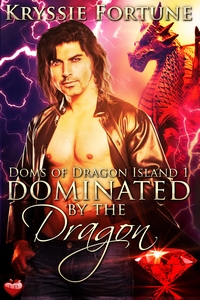 Dominated by the Dragon (MF
Kryssie Fortune
In Shelf
$2.99