In the continuation of Blood Eclipse, Rory finds himself hopelessly enamored with Carden and will finally experience the rapture of loving a pure blood vampire. But there are those who are determined to have Carden at all costs to satisfy their own self-interest, and they won't let anyone get in their way.

Carden still seeks the truth of what happened to his parents long ago, and he won't rest until he finds the answers. And when the discovery is made, and shocking secrets are revealed, all hell breaks loose as Carden sets his sights on vengeance. And suddenly the fragility between good and evil will be blown wide open.

Rory’s body was bathed in moonlight, completely exposed to Carden’s hungry gaze. He was trembling all over, moving ever closer to where Carden lay on the bed. “What is this?” he whispered. “Is it magic? Did you lure me here with some kind of a spell?”

“No, no, Rory,” Carden said softly, rising off the bed. He pulled Rory into his arms and held him for a moment, trying to reassure him, take him out of that place where he hung suspended halfway between terror and an uncontrollable, aching need.

Carden recognized clearly those emotions. He could smell them. Those emotions had radiated from so many mortals he’d encountered in his existence that it made his head spin to think of it. It especially pained him coming from Rory, wounded him deep inside to know that he had the power to cause such turmoil in his heart.

There was nothing he could do to totally quell it. Nothing he could say. Rory had a deep mistrust of vampires to begin with, and his sudden desire for him was making Rory feel torn.

It was probably not the smartest of moves to be holding Rory in his arms like this, both of them completely naked. Rory’s need was made more conspicuous now with his erection pressing enticingly against Carden’s thigh. The feeling of skin on skin was distracting. He had to keep his senses honed for any sound or movement, vampire or human. They couldn’t do this here. In fact, they couldn’t do this at all.

“I don’t care if I die here,” Rory was saying, his hands reaching up to hold Carden’s face, his eyes searching, his gaze blazing into his. “If you’ve somehow bewitched me, so be it.”

Carden froze, looked around. Something. There was something or someone, and it was mortal because he could hear the heart beating, the blood coursing through their veins. It was someone other than Rory, two hearts beating in his ears.

Rory moved his hand down Carden’s chest, placed his lips there for a second then the hand traveled further to a place Carden couldn’t let it go. “No,” he said, clutching Rory’s hand and pulling it to his lips. He kissed it and heard Rory’s moan of protest deep in his own soul.

Carden was holding Rory’s hand in such a way that it kept him frozen to the spot. He had no choice. Rory’s touch was weakening him and he knew they weren’t alone. To tell Rory would alert the intruder. Show yourself.

“What are you doing? Why can’t I move? I want to touch you. You just can’t do what you did to me then leave me like this. Why did you kiss me at all if this isn’t what you wanted?” Rory’s voice was angry now.

He’d have to lie to him. It was the only way. “It’s not real,” Carden said. “I put you under my spell. I was lonely. I release you.” His words rang false even to his own ears in that darkened room. “Go now.” He dropped his hand and turned away.

Carden could hear Rory’s thoughts in his head. They were jumbled and confused. This is torment. Am I attracted to death? My cock aches. Carden….Carden…your beauty holds me here…I can’t leave you. Give me what I want and I’ll go. If it’s a spell then, take it off, take this mad desire away. You haven’t released me.

Carden looked at him from over his shoulder. “Human life is precious. You should take more care with it. You don’t want to get too close to me, I’m dangerous.”

“Then do as you said you would and release me from this spell you say you have me under. Or maybe you enjoy this kind of thing, the great and mighty vampire torturing us poor, unworthy mortal conquests?”

“You think I’m having a good laugh at your expense?”

Carden reached for his robe. He’d never been modest and sometimes he was unaware of the effect his nudity had on mortals. He put on the robe and tied it. Whoever it was who was nearby, hadn’t gone anywhere. He could still sense them. If he thought it safe to let Rory go, he would have sought the mortal out, but he couldn’t risk it. He wouldn’t play with Rory’s life.

“Are you even listening to me?”

Carden walked over and closed his bedroom door, turning the lock. He wasn’t sure that would keep it out, but he knew now for sure he couldn’t let Rory leave here until he knew the threat had passed.

“What are you doing?” Rory demanded anxiously.

Carden came and stood in front of him, looking down at his face. He put his hands on Rory’s shoulders. “I’m sorry, Rory, but I can’t let you leave here.”

“What? First you tell me to leave, now you…” Rory backed away from him.

“What’s happening?” Rory asked him, looking around the room, watching as Carden walked over and closed the balcony doors. “What are you afraid of? Is it Blane?”

“No,” Carden said. “It isn’t Blane.” He went to touch him, but Rory moved out of his reach.

“I’m not going to drink your blood, Rory,” Carden snapped. He sat down on the edge of the bed. “You’re safe with me.” 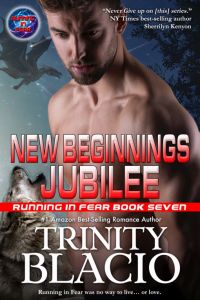 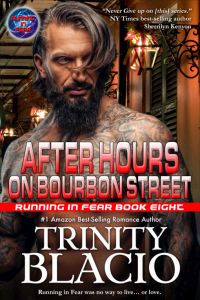 After Hours on Bourbon Street - Book Eight of the Running in Fear Series
Trinity Blacio (RAB)
In Shelf
$6.99 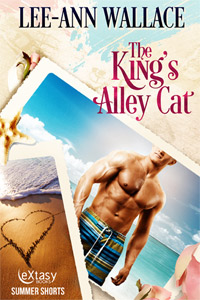