Heat Rating: Scorching
Word Count: 25,214
13 Ratings (4.3)
Fantasy Paranormal Shape-shifter Alternative (M/M, Gay)
In Bookshelf
In Cart
In Wish List
Available formats
PDF
Mobi
ePub
HTML
Cover Art by Harris Channing
Reviews
What happens when Dragon finds his mate and his mate a omega coyote does not want anything to do with dragons. This is Adrien & Tristan journey and the battles ahead
Cant wait for the next book in the series

The Last Omega He Would Ever Choose (MM)
Marcy Jacks
In Shelf
$3.99
All Books In Cart
All Books In Bookshelf
Excerpt

Adrien used to think he was fairly good looking, but now...two months. Two months after being taken and he knew what he looked like. Skinny, dirty, and some wounds that were still healing on his hips and bruises all over his chest and face would hardly make him the most appealing choice around.

Maybe that was another reason why the dragons wanted his sister so badly now. Sarah had been untouched by them so far. They hadn’t bruised her too much, Big Red wouldn’t allow anyone to hit her, so her looks were still intact, and with Andrew and Adrien trying to sneak her as much of their rations as possible, she hadn’t lost as much weight.

He forced himself to stand tall, to stand proud, to show them they hadn’t broken him, and to dare them with his eyes to do something about it.

Stay the fuck away from my sister, you pervs, you’ve got someone willing right here, come and get it.

One of the dragons sighed as he stood. “If I don’t get something soon, my cock will fly off and go find someone who’ll take care of it for me.” He put his hand on Adrien’s shoulder. “Come on with me.”

Adrien tensed, every bone in his body becoming stiff as he searched out the threat, as he searched for what it was that had done that, and what that even was.

He touched his face. The dragons around him scrambled, shouted, and screamed, but he barely heard it when Adrien saw the blood on his fingertips.

His eyes slowly widened, the horror of it hitting home, and he couldn’t help but glance down at the dragon that had been about to defile him.

On the ground, body not still, it was twitching, but he was very much dead with the arrow through his head.

Adrien’s brain finally caught up with everything else around him as he noted the war cried, the shouts to war, and the way the dragons got up to fight against their attackers, whoever their attackers were.

And Adrien stood there, unable to move, his mind shutting down, the dark cloak he used to hide himself with at night, to protect himself, coming over him when he should have been fleeing.

The little coyote omega didn’t run, and Tristan Bragg, warrior dragon under Arthur King, thought his heart was going to punch out of his chest.

That was Adrien, he knew it. Adrien looked different from before, it had been months since Tristan had seen him, but that was definitely him.

Tristan couldn’t mistake that face, even though Adrien had a twin brother.

“Run away, hide, do something.”

He seethed through grit teeth as Adrien stood there, staring down at his bloody hand.

In shock. Fuck. That had to be it. His mate was in shock and he was going to get himself killed by standing there.

Tristan had hoped the distraction would be enough to send Adrien running for cover, and then Lance could jump in and take care of the other dragons, distracting them and helping the omegas to make their break for it, but no, Tristan had to come out of hiding.

He pushed himself through the shrubs and trees. He’d painted his body so he would be harder to find in the foiliage, but out in the open like this, he had only seconds before someone happened to see him. He grabbed Adrien by the shoulders, wanting to shake him out of this trance he’d fallen into, but Adrien still didn’t appear to notice him.

“Adrien!” Tristan screamed in his face, desperate to get the omega’s attention. Only when Adrien finally blinked up at him, looking at him for the first time, was Tristan able to breathe.

But there was no recognition there. Nothing to suggest Adrien had ever seen Tristan before in his entire life.

“Come on, sweetheart, we’ve got to get out of here.”

Tristan nodded, pulling Adrien with him to the bushes. “Yes, honey, we’re leaving. Come on.”

Except when he pulled Adrien to the cover of the trees and bushes, something happened. Adrien’s eyes flew wide. He screamed bloody murder, as though there was someone in front of him with a knife ready to kill him if he dared to step another foot forward.

And then someone saw them. Someone with a fucking ugly scar down his face and chest.

No point even if he did manage to stop. That guy was still coming and he didn’t have a weapon in his hands, but his fingers turned into the meanest dragon claws Tristan had ever seen in his life.

Tristan pushed Adrien behind him and flew at their attacker.

Tristan laughed at him. Adrien liked the sound of it, but he also wanted to be taken seriously.

“It’s not funny,” he gasped, even though it kind of was.

He probably looked so ridiculous right now, but none of that mattered. The only thing that mattered was the wonderful touch of those fingers pressing against his asshole.

He’d never played with himself back there before. He hadn’t seen the bother. Whenever he wanted to touch himself at night, or in the bath, his dick had been the easier target.

Now he knew how innocent he really was. This didn’t just feel good, the teasing felt amazing, wonderful. His cock throbbed and Adrien knew that if Tristan kept this up, he might even be able to make Adrien come without a single touch to his dick.

That would be kind of amazing, but Adrien wanted the claim more.

All Tristan had done so far was circle his fingers around the ring of muscle, making Adrien quiver and gasp for breath.

“Not yet.” Tristan’s voice was low. He sounded as pleased as he was making Adrien feel. It was a wonderful sound. Adrien rolled his shoulders, but he couldn’t seem to expel the build up of energy inside him.

“Why not?” Adrien whined. He couldn’t help it. It seemed suddenly so…mean spirited for his mate to deny him.

“Because I don’t want to hurt you. Get on your hands and knees.”

He’d just gotten comfortable leaning up in the man’s lap. He didn’t want to move an inch.

Adrien figured he had to do as he was told. Tristan seemed sure of himself, and Adrien was kind of curious.

He got off his mate’s lap, looked around for a good spot, and then put himself down on his hands and knees.

Tristan laughed at him. “I meant for you to face away, but this is okay.”

Adrien pushed himself up to his knees. “You don’t want to face me?”

“Not that, but this is actually better.” Tristan got to his feet and walked behind Adrien. He got to one knee, his hands holding onto Adrien’s hips. “Push forward a little. Put your hands on the log.”

“I thought you wanted me on my hands and knees.” Adrien thought he knew where this was going now, and the new position made his already tight cock throb, and his testicles ached with the need for touch.

“I do, but just trust me on this one. You said you trusted me, right?”

Adrien was so exposed like this. His pants down around his thighs, his bare ass in perfect view for Tristan to see, and the dragon’s hands settled comfortably on his hips.

For the first time, every inch of Tristan was starting to feel warm.

Adrien nodded. “I trust you.”

Adrien thought he would hear more from the other man, more comforting words, more anything.

Instead he felt something warmer, and wetter, touching his hole, and he damn near jumped.

Adrien had to look back to see what Tristan was doing, and he couldn’t believe it when he saw the man’s face between his legs, licking him there.

It felt so good. Too good. He couldn’t believe how good that felt, and when that tongue pushed inside him, Adrien was only too happy to welcome that touch.

The slick push forward, opening him up, wiggling and making Adrien’s claws come out without his consent. It made him lose control.

Never in a million years would he have thought of doing something like that for pleasure, but Gods, it felt good. Why did no one ever tell him these things?

Tristan did. He didn’t reply and he didn’t pull his tongue away. He pushed it in deeper still, and Adrien had to wonder how he was doing that?

Adrien couldn’t take it anymore. He reached down, palming himself. He stroked his cock hard and fast, his orgasm coming and he was completely unable to stop it.

So he let it come. Every muscle in his body clenched tight, including his hole around Tristan’s tongue, but the man didn’t pull away as Adrien moaned and spasmed against the log, pushing his ass back against Tristan’s tongue, wanting so much more even as warm, wet seed shot onto his pumping fist.

And then he relaxed. Adrien lost the ability to hold himself up. He collapsed against the log, gasping for breath, trying desperately to blink away the stars that had appeared in his eyes, but they wouldn’t be gone.

When Tristan grabbed him, pulling him against his chest, kissing Adrien’s neck and nuzzling him, Adrien couldn’t move. He was helpless against Tristan’s touch, but it was the best kind of helplessness he’d ever felt.

Locked in a Room with a Werewolf (MM)
Marcy Jacks
In Shelf
$0.99 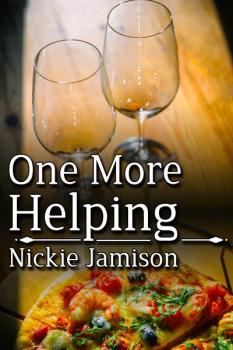