Breann could see why she was scared to go home by herself. It was a very dark, long and twisted driveway. She sighed seeing it was uphill as well. She was very out of shape, and dreaded walking up that hill. “Well, let’s get you home.”

Aubrey looked to be feeling better being so close to home and she pulled her into the dark driveway.

Breann could feel herself breathing hard as they made their way up the hill. There were woods on either side of the driveway, but that wasn’t uncommon in this area. There was a lot of forested areas in Washington. Breann heard a noise that made her pause. Aubrey noticed it as well and gripped her hand harder. She made it over the rise and saw men in monster costumes wandering in the front yard. One of them was carrying a young woman over his shoulder. Her arms hung limply and she was not struggling.

Aubrey let out a cry, “Aunt Melly. Those men in masks have Aunt Melly?”

Breann did her best to quiet Aubrey, but she continued to cry. They all stopped and turned to look towards her. Breann knew she didn’t want their attention. There were no signs of emergency vehicles around so they were not police or paramedics.

“Aubrey, run into the woods and don’t come out.”

“Run. Go now and do not stop. There is a fire station not far from here. Go there and tell them you need help.” Breann shoved the frightened girl in the direction of the fire station.

Aubrey let out a frightened cry as she turned and ran into the woods as Breann had instructed.

Hoping it would draw attention away from Aubrey, Breann yelled, “Hey you.” She waved her arms to gain their attention then ran in the opposite direction. She let out a scream as she ran. “Help! Help us. Fire. Fire!” She screamed knowing that was the best way to attract attention instead of screaming about monsters. It seemed to have worked since she could hear heavy breathing and someone rushing through the brush behind her. She pulled out her phone and swiped the screen without looking at it. It was so hard to get the right screen up, and run at the same time.

The keypad finally appeared and she hit 911. When she heard the operator answer “911, how may I direct your call?”

“I am being chased by men who kidnapped a woman.” She screamed into the phone.

She could not stop or take time to try and explain where she was. She simply prayed that the police department here was able to trace her phone and find her. She shoved the phone in her pocket and continued screaming “fire,” and running.

She stumbled over every unseen tree root and stick laying on the ground. Now that the attackers were right behind her she was not so sure she had come up with a great plan.

A large hand landed on her shoulder. She tried to put in a burst of speed, but another hand grabbed her hair. She jerked to a painful halt.

“Help me! Someone please help me.” She screamed, then a large fist crashed into her face. She was stunned into silence for a moment before she let out another cry. The large man continued to snarl at her in some strange language. She shook her head even more frightened by how strange his language was. It didn’t sound human. She screamed again hoping someone was close that could help her. He balled up his fist and hit her hard. She dropped her phone and remembered she still carried her gun. She pulled it out and pointed it at the evil looking bastard and fired. Dark purple blood splattered everywhere. Breann stood there in stunned shock for a moment. This was not red blood. She poked at the dead man’s face to see what he looked like under the mask. He wore no mask. Her entire body shook with shock and fear. This was impossible. She heard a roar of another one of those things moving towards her. Terror gripped her until she heard the faint siren drawing closer. The police had been called. Aubrey had made it safely to the fire station. Breann turned and ran towards the road. She would have stayed to guard the scene, but that monster was coming closer. She did not want to chance another encounter with one of those things. Her face was still throbbing from the dead one.

“Brant, why are you tying me up?

“Because I know you are shy about your body. I want to enjoy you without you constantly trying to block me.” He gave her a look full of passion. “Grab the edge of the table over your head. If you let go and try to push me away I will spank you then tie your hands there as well.”

“I would hate to have to spank you for disobeying me.”

Breann’s mouth closed instantly. She felt fresh arousal coat her pussy at the thought of being helpless over Brant’s lap, but not being spanked. Forced to do what he wanted though. God that was hot. What is wrong with me? She reached up and grabbed the edge of the table like Brant had ordered her and closed her eyes. She just could not watch Brant look at her naked body. It was embarrassing enough to be trussed up on her own kitchen table.

She heard the soft rustle of Brant moving then his hands were on her inner thigh. She tensed as they moved closer to her sex. His fingers moved over her pussy lightly. He spread her pussy open and his shoulders shoved her legs wider apart. “Brant” She gasped not sure if she wanted to tell him to stop or to hurry up and touch her.

“Sshhh,” She felt his breath caress her swollen clit and she moved her hips. A light touch from his tongue swirled in her channel tasting her. She moaned and grabbed the table in a crushing hold. No one had ever put their mouth there before. He shoved his tongue into her pussy and pulled it out the same way he had shoved his cock in and out of her last night as they made love.

Breann moved her hips to give him more access. Her breathing was hard, but it was nothing like she felt last night. Women who said oral sex was amazing must have had horrible intercourse. The sex was way better.

Brant moved his tongue higher and swiped over her clit. Breann jerked in pleasure and gasped.

Brant swiped it several more times than sucked her clit into his mouth. He spread her pussy lips farther out forcing her clit out of its hood. When it was exposed he went to work moving his tongue fast and hard.

Breann was being hit with lightning bolts of pleasure. Her hands went to his head at first intent on pushing him away, but by the time she got them lowered and fisted into his hair she was shoving him harder into her pussy. Her hips rocked as her body soared with pleasure. She held onto him while she cried out.

Brant grabbed her hips and held her still. He sucked and teased her clit until she was screaming with the need to come. Just when she thought she would go over he would back off and go back to slowly fucking into her pussy with his tongue. He would lap up all of her juices then go back to her clit. Breann had gone back to holding onto the table and her body thrashed. She would shove her body into his mouth hoping for just enough contact to bring on the orgasm she screamed for. Brant held her still though and gave her whatever he wanted.

Breann could feel the orgasm coiling again. She gasped for air and moaned out every breath. Her legs shook from the intensity of the orgasm that was building. “Brant please. I can’t.” Her head shook from side to side and she feared she would break her table due to how hard she was pulling against it.

Brant growled over her clit and kept his tongue moving. Blinding white light seized her and she screamed brokenly as pleasure cascaded over her. Wave after wave of pleasure crashed through her body. She wondered if Brant had discovered how to keep her body coming indefinitely as she cried out her release. He finally moved away from her for a moment and she let go of the table.

She felt as week as a newborn calf. She could only lay there feeling boneless as Brant lined his cock up with her soaked pussy. “You are mine.” He growled. “Touch me. I want your hands on me as I fuck you.”

“I am. I am yours.” Breann panted breathlessly. She gladly moved her hands to his bare chest to feel his smooth, muscular skin.

“Always. I will never let you go. You are my bonded.” Brant surged into her with one long, powerful thrust.

Breann arched her back at the pleasure. She thought she could not give anymore, but she was wrong. 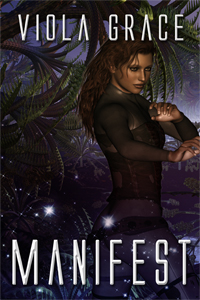