She glanced around at the other balconies. Maybe she could cry out to the neighbors, but she couldn’t be sure if they were friends with Cade. He had warned her he had many friends in the building who had agreed to call him if she tried anything. She was trapped here unless she wanted to chance a third-story fall.

She stared out at the parking lot, wishing she could fly. Freedom was so close, yet so far away. As her gaze ran across the blacktop, she thought she saw a flash and focused on the spot. Something strange shimmered on the street. A huge man walked out of thin air and onto the grass. It was as if he walked out of an invisible vehicle. She staggered back in stunned disbelief. She must have been hit harder than she thought, and now she was seeing things.

A shiver ran up her spine. Cade had some dangerous people mad at him. Could they possibly hide like that? Would they take revenge by harming her? Cade was possessive as well as abusive, even more so when he found out she was worth a good amount of money once she turned eighteen. That made him even more determined to make sure no one else looked at her. He would be furious if anyone, even one of his friends, touched her.

She backed slowly into the apartment and closed the glass door. She would get a drink and some ibuprofen and see if the invisible vehicle suddenly became visible. If he was still there by the time Cade got back, she would be sure to tell him. She wanted away from him, but not bad enough to end up in the hands of some drug dealer from a foreign drug cartel, or gang-banger who was pissed at Cade.

She closed her eyes and rested her head against the wall. She had just turned eighteen a few weeks ago. This should have been the most exciting time of her life. If only Laura had not been murdered. If only her parents had survived the accident. If only she wasn’t so impulsive. Her sister Nicole had tried to reason with her to stay away from Cade. If only she hadn’t been so bullheaded.

She felt her eyes start to burn as regret filled her over her stupid mistakes. She had no one to blame but herself for her choices, and she was paying a high price for them. She hoped Nicole was not too upset with her. At the time she thought she was doing her a favor. Nicole had two young children and another one on the way. She had her own family and she was an adult now. Nicole didn’t need her adding more stress on her. She could see now that Nicole was probably much more stressed wondering where she was and if she was okay. No, I’m not okay, Nicole. I didn’t listen to you and now I am in a lot of trouble.

The tone went off and she knew Cade would be home soon. “Shit. Fucking great,” she cussed. She should have had dinner done by now and all the laundry ironed and hung up. He was going to be so mad, but she had been in too much pain to move around much until just a couple of hours ago.

She pulled some steaks out of the freezer and filled the sink with warm water, so they would thaw quickly. Maybe if she hurried, she could get the wrinkles out of his shirts and just hang his jeans.

The door banged open and to her horror, Cade walked in. “Why the fuck do I not smell dinner cooking?” he demanded.

“Cade. You’re early.” Kelsey’s heart beat frantically in her chest. Nothing had been done, since she had spent most of the day lying on the couch.

“Yeah, I came home early to surprise you and instead I see you lying around on your lazy, fat ass.” He stalked over towards her and kicked a chair out of his way.

Kelsey screamed when it crashed next to her, splintering, “Cade. Stop.”

“Don’t you fucking tell me what to do. Get your ass over here.” He pointed at the floor in front of him angrily as he yelled.

Kelsey frantically tried to get the blinds out of the way to open the sliding door. She must have locked it. When she was too panicked to get the lock to move, she ran and tried to keep furniture between her and Cade. “Cade, don’t do this, please.”

“You are only pissing me off even more,” he yelled and kicked the side table out of his way to reach her. It hit the door with a loud crack and broke into pieces next to her.

Kelsey dodged the table, but could not escape his hands this time. He yanked her back hard and slapped her face several times. “You want to fucking piss me off,” he yelled while slapping her.

Kelsey screamed at the pain from him hitting her bruises and holding her by the hair so hard. “No, Cade, no. I said I was sorry.” She tried to pry his hand out of her hair and protect her face from his other hand.

“You just keep making things worse for yourself. You do not have any plans of signing over that money, do you? You are going to try and get me into trouble. Do you think I am fucking stupid?”

Kelsey’s eyes widened fearfully. She hadn’t said anything. How could he know she planned to tell the bank teller she was being held against her will? She shook her head at him. “No, Cade. I was going to. On Monday, just like you said. I am going to add you and then you can have access to the account.”

“You’re a fucking liar, bitch. I am sick of hearing your lies and excuses.” He bent down and picked up the leg of the table. He hit her in the stomach with it, which drove her to her knees. She raised her hands over her head. She closed her eyes, waiting for the next blow to hit her. She screamed at the loud crack and expected to feel pain. There was none, and she opened her eyes to see the door had been kicked in and large men were storming into the apartment.

“What the fuck—” Cade started.  He tensed and fell to the floor.

Time seemed to slow down as huge men swarmed into the apartment.

Kelsey swallowed hard when Norlan unbuttoned the waistband of her skirt. She felt the fabric pool at her feet and she stepped out of it.

He watched her with hungry eyes. She fought the urge to fidget as he stared at her naked body. Would he still want her now that he had seen all of her? She looked into his eyes and saw desire burning in them. She grinned impishly at him when he licked his lips. He still wanted her and she felt her body start to warm again.

He bent and picked her up into his arms again. He claimed her mouth in another passionate kiss. She felt herself lowered to the soft mattress. His hands moved over her body, making her pussy once again start to ache for him.

“Do you trust me?” he asked her again.

Kelsey nodded. “Yes, I trust you completely. I know you would never hurt me.” She wiggled slightly just to feel that she was trapped under him. His body held her pinned. It caused her arousal to grow as she was held helpless under him.

“This is your first time. I have heard it can be painful. I will try to make it good for you even though it may hurt a bit at first.”

“I’m a little scared,” she confessed with a shaky breath.

He moved his head lower and kissed her collarbone gently. “Don’t be. I would never hurt you.” His hot breath wafted across her skin, but still she shivered.

He moved lower and took one of her nipples into his mouth. She arched her back at the wonderful sensation. She had no idea it could feel so good. She brought her hands down and kneaded them through his hair.

“I need control in the bedroom. Would it scare you too much if I ordered you to not move?”

Kelsey shook her head no. The idea made her pussy clench again. She had a vision of Norlan commanding her body.

He smiled and kissed her lips gently. “Put your hands over your head and keep them there.”

He moved lower until his nose touched her soft curls. “I say it is time for dessert.” He shoved her thighs apart and used his wide shoulders to keep her legs spread wide for him. He buried his face into her pussy and lapped his tongue over her engorged clit.

She had thought his fingers felt good, but this was far better. His tongue circled her clit a few times before he sucked it into his mouth. She could not help but move and try to jerk her legs closed. She gripped his hair in her hands and tried to push him away. That was far too much pleasure for her to handle.

He looked up into her face. “I see you need some help obeying me.” He reached over, grabbed a soft strap and wrapped it around her upper thigh, then got another from the other side of the bed. “I am going to make sure you do not move.”

“But—” She gasped when he put soft straps around her wrists. “Norlan.” She breathed hard in arousal and anxiety as he tied her legs opened. He left her hands free, though.

She took some deep breaths, but relaxed. Her hands were free. She nodded as she looked into Norlan’s eyes. She trusted him completely. He again lowered to her oversensitive pussy and lapped at her juices. He would rise up and play with her nipples for a little while, then go back to her clit. He took his time and toyed with her in a way that had her aching. Then he reached up and pinched her nipples while he lightly circled her clit with his tongue. Her hips moved as she burned for release and wished she could either push him away or pull him closer. Right now, as he played with her, she was stuck in between heaven and hell.

“Shhh, Kelsey, I am going to take care of you.” He unfastened the straps around her legs, and then he crawled up her body and settled as he hovered over her. She wrapped her legs around him and felt the head of his cock at the entrance of her pussy. She tried to use her legs to force him to enter her. “No, my lenora. Not yet. I want this to be really good and not hurt as much as it would if I just took you.”

He lifted his body slightly and stayed hovering over her. Her pussy was aching for release and at that moment, she wanted him to fill her. She tried to close her legs so she could try to relieve some of the ache, but now, instead of the straps, his massive body held her legs open. His head leaned down and he whispered in her ear, “Tell me you are mine.” 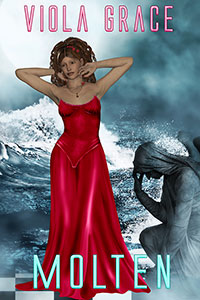