Archaeologist Rylie Sawyer unknowingly unearthed a cursed pendant that seduces and kills. Desperate to keep others safe, Rylie plans on using her empathic abilities to steal the pendant back. The day of the heist, she discovers she isn’t the only one going after the pendant.

Trey Masters has secretly watched Rylie from afar for the last two years. He will stop at nothing to protect Rylie, even entrapping her with his abilities. All he needs to do now is keep her out of the game while his team acquires the pendant.

From the moment they meet they have an intense and otherworldly bond. Together, they must use their powers to destroy the pendant. Caught by the scars of the past year, Rylie knows she must trust Trey with her life. As the secrets Trey is keeping are revealed, will she trust the man she’s fallen hard for or run away?

Rylie Sawyer wasn’t a thief, but she was about to become one.

Her heart hammered as she stared at the pendant through the downtown store window. She was the archeologist that unearthed it in Jordan a year ago. The window vibrated as though it were alive. Rylie reached out and smoothed her fingers across the silky, wet glass. A shiver whispered across Rylie’s chilled skin. She smoothed the wetness between her fingers. It felt like her honey spreading over a man’s cock.

The sound of Cincinnati’s evening commute faded to a low rumble in the background. You’re mine.

The ruby’s deadly power to seduce was its charm, its envy. Even now, Rylie could feel the undercurrent taunt her closer. The force was so strong it had her opening the door to the high-end jewelry store.

Warmth blew down from the heating vent.

Everything came into sharp focus. She remembered the first time she put the pendant on. She had an orgasm as soon as the stone settled into the nook between her breasts.

She licked her lips nervously as her nipples tightened into aroused, sensitive peaks from the memory. She was going to steal it tonight.

A shot of adrenaline pumped through her body. Rylie’s light-blue irises caressed the bloodred ruby pendant. Light caught the sparkling gem and danced. Diamonds circled the ruby and flounced romantically up the chain.

It was a mistake to go inside before a robbery. She’d be captured on their surveillance cameras. A worker took the pendant from the locked case and brought it to a private table for a couple to see.

Rylie took two steps toward that table before she stopped short. Fear raced over her skin. They were going to buy it before she had a chance to take it. Fuck me.

Darkness clung to the piece. The piece wanted to find another victim. The curse was still alive, and it knew she was here. Its power to allure was an intoxicating, sexual rush like no other Rylie had ever experienced. Even knowing what it was, she wasn’t immune to the power it had.

She headed toward the case nearest the pendant. A flutter rippled over her skin as she moved. Rylie glanced over her shoulder and saw a man standing at the end of the case. He was watching her closely. Their gazes locked. Surprise filtered through his gaze before he shut it down.

Another shiver moved through her body. It was as though she knew him intimately and always had. Who was he?

Wet, black hair curled around his ears and the nape of his neck. He was shockingly handsome. The kind of man that made her aware of her being a woman who hadn’t had sex in over a year. He was all alpha male and by the looks of things just over six foot tall. Perhaps he was even taller up close.

Rylie was suddenly aware, too, that she hadn’t bothered to put on any makeup when she ran out of the hotel this evening.

She felt suddenly self-conscious of the fact that her jeans were on their second day and that her shirt was an out-of-season special. Her thin navy-and-polka-dot rain jacket wasn’t much to keep out the Autumn chill.

His smile was a wanted distraction, but not for long. The woman at the table started gushing over the pendant as it was draped around her neck.

“It’s perfect, Tom! I absolutely love it! I have to have it.”

The woman frowned. “What do you mean, you don’t know? It’s amazing.”

The husband had a right to his trepidation. Sunlight glinted off the diamonds as though it were stealing the soul of the sun or the wearer. Rylie circled around the display case just as pain shot through her temple. Rylie flinched. Fate wanted in again. Not now. Not when she was so close to putting a stop to the cursed thing before it took another life.

She winced. There was little time before she’d lose all control. She had to get out of there before the psychic event left her immobile and more importantly, vulnerable.

Rylie rushed out of the store and onto the Cincinnati sidewalk, tossing one last glance at the pendant. They were taking it to the register. The pendant was getting away again. Rylie groaned as pain shot through her head like a crack of a whip.

She stumbled down the alley, grabbing her head.

Quiet enveloped her being. City traffic noises faded. Panic spiraled through her as her hearing went first. She had to get control of herself. She tried the deep breathing exercises her therapist suggested. They weren’t working. She cringed. White-hot fire seared her mind, leaving it sluggish and fogged. Oh, no. It was starting. There was nowhere to go.

Gravel mashed under her heels. Panic enveloped her as her vision went out. She fumbled as she ducked further into the alley. Two more steps and she wouldn’t be seen by anyone. Rylie made it one more before she collapsed to the ground.

His mouth crushed over hers in a passionate kiss. She moaned as he used the cold cobblestone to hold her up. Trey’s hands came around to lift her legs around his waist. He smoothed his hands up her thighs and reached around to get a nice squeeze of her ass. Rylie twined her arms around his neck and kissed him fully. Her tongue slipped into his mouth and took control. He groaned.

A small part of her realized she was submitting to his touch and that burned. She was losing every part of her life she had control over.

He pulled his mouth away to nibble on her neck and scraped his teeth up over her earlobe. His heated breath whispered over her ear. “I’m going to make you mine.”

She shivered as his hand moved up her belly to squeeze her breast. He didn’t stop there. His hand stroked up the front of her neck, caressing her thrumming heartbeat. His thumb lifted her chin so that their eyes met. His lips brushed over hers, testing her boundaries. Her pussy clenched tightly. She wanted this and was frightened she would get it.

“Fuck. I like it when you say my last name,” he growled.

She groaned as his cock pinned her to the wall, pushing her pussy lips open. He kissed her again. She could feel the throbbing beat of his cock as he worked her mouth over. Trey slid his hand down to the button on her jeans, flicking it open with an ease that spoke of experience. Her zipper flew south half a second later.

He thumbed his way up over her nubbin, rolling it around with the pad of his thumb like a joystick. Rylie was getting close. She could feel her orgasm building to a frenzy. All of a sudden, Trey started to hold back. She was balanced on the edge.

Her eyes flew open and her nails dug into his rock hard shoulders. “Trey.”

“When was the last time a man got you off?”

Her foggy and sexed-up brain was slow to understand his question. “Um, you mean you don’t know? I thought you knew everything about me.”

He groaned. “Tell me you’ve been taking care of your sex.”

She chuckled, a deep, husky sound. “Wouldn’t you like to see that?”

“You have a sassy mouth when you’re aroused.”

“Yes. Keep your eyes open. I want to see them dilate when you come.”

He stopped playing with her pussy to drive his point home. The loss of friction and more importantly, his kisses, made her realize how much she wanted Trey to touch her everywhere. She tried to move but he stopped her with a rough pinch to her ass that locked her body down tight to his. He licked and kissed his way down her neck and back up again. His eyes locked with hers.

“When we’re together, you’re mine. You’ll do everything and anything I want.”

He edged the knuckle of his forefinger up and locked her clit between his finger and thumb. She groaned as he emphasized his point by squeezing her clit. Pleasure exploded through her body. He rolled it tighter. Her core tightened and her pussy contracted hard.

His demand was an order she dared not refuse. Rylie cried out as her orgasm stole her breath away. She bit her lip as she held his gaze. The muscles in his face and body were flexed taut as he watched her go. There was something animalistic about the way he drank up every last drop of her reaction. The primal need to mate was a tribal beat vibrating between them.

Rylie squirmed, rocking her hips as he held her in his seductive grip, not releasing her clit at all. Her body wet more, causing his knuckles to slip back into her pussy.

Rylie was still riding the top note of her orgasm as he lifted her higher on his hips. He reached down with his other hand to pull the corners of her jeans aside as though he were opening a neatly wrapped gift. He reached in with both hands, grabbing the cotton band of her panties. She gasped as he gently tugged, slipping her panties into a reversed thong. He twisted the cotton into his fist while his fingers went exploring. 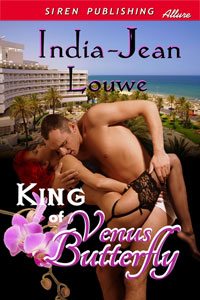