The Best of Roger Frank Selby

The Best of Roger Frank Selby, A Sculptor’s Touch, and other tales A naive young model must pose for a mysterious but afflicted sculptor. Initially disturbed and outraged by his exotic lifestyle and submissive companion, she later decides to return with a vengeance. But how can a blind man sculpt a woman? The newly colonised planet, Eden, has slipped back into feudalism. An overlord sends out his flying Examiner to harvest exceptional women from his surrounding lands – but just who is this seraphic Examiner, and will the super-intelligent beauty, Andromeda, change this man forever? A female Butler, ex-army, is settling into her new job at the manor house until she encounters an old lover – the fiancée of her male employer. A sexual catharsis with the couple obliterates her past trauma, and her suppressed femininity bursts free, but will it cost her her job? A woodwork teacher having trouble controlling his class discovers a new confidence when the busty, bossy drama teacher asks him to fashion a bespoke set of stocks for the school play. Trial fittings uncover that drama teacher, leading to spankings and her sexual liberation within the medieval restraining device. An exercise bike manufacturing business is going downhill until the new German secretary suggests a brilliant, sexy innovation to the two partners. But just where is this cosy photo shoot on their new exercise tandem taking the three of them? Five wide-ranging, libido-launching tales, selected from Roger Frank Selby’s many stories written for Xcite books. 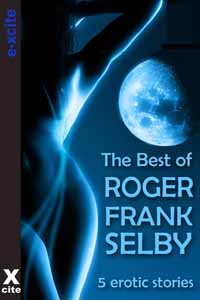 The Best of Roger Frank Selby

‘Hello, I’m calling about the job. Is it still vacant?’
She sounded very nice, young and positive. ‘I’m still interviewing. Have you done any modelling work before?’
‘Yes… Well, just a little at Art College.’
‘You realise of course that I’ll require you to pose in the nude?’
There was a very slight hesitation. ‘Well, of course.’
‘You don’t have a problem with that?’
‘Hardly. It’s what I did at college.’
Maybe she did, but he detected a note of anxiety. ‘And you were quite comfortable with that?’
‘To tell the truth, I was always a little embarrassed showing my figure in front of all those students…’
‘Well, it’s only me, and you’ll have no need to be embarrassed, as you will see. Would you like to come for an interview, er …?’
‘Angela.’
He called Bess over, tickled her behind the ears – which she loved – and patted the side of her chest. He was rewarded with a lick. ‘Good girl! Well, that one seemed okay. I wonder what she’ll be like in the flesh?’