How far is too far?

Emily Varner arrives at work with only two things on her mind: was her boyfriend cheating on her and how was she going to pay for law school?

At the ultra exclusive Event, along with 79 other spectacularly beautiful young women, Emily works completely nude with her clothed assistant Kit to have as many sexual encounters as she can, with stunning financial "gifts" after each. The sexual hurdles she must conquer include sexual acts she'd only heard of. There are many firsts that night for Emily, including sex with women, groups, and extremely public sex. Acknowledging her arousal over exhibitionism, Emily finds even her once secret fetish is pushed to the limit more than a few times.

As she adapts and even begins to thrive in this disorienting environment, she meets a stunning, mysterious man who changes her perception about her life...and gives her a glimpse into what her future could be.

She leaves the Event with even more sexual adventures in her immediate future. Yet while she longs for her mystery man, she will soon find her captivating admirer has not forgotten her. 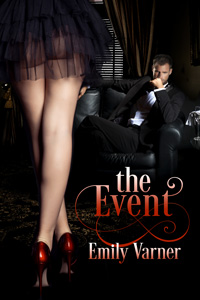 My name is Emily Varner. Not too many months ago, I was a twenty-six year old pre-law student at Columbia University. I worked on the wait staff of a high-end wine bar in Lower Manhattan. Just that morning I had applied for a student loan that would saddle me with massive debt, that is until I could get out, get stabilized in practice and pay it off—a brutal timeline I saw as consuming seven to ten years of my life. If I was lucky…and frugal.

That evening, a woman dropped in to my bar to have a glass of wine with a friend.

And my life changed.

Our bar, Oenology—a pretentious way of expressing everything to do with wine making—had a special nitrogen Cruvinet system that allowed us to open super expensive wine and sell it by the glass over a period of weeks, maybe longer, keeping the wine fresh like you’d just uncorked it. This attracted a specialized set of guests, mostly regular working stiff Manhattanites—who made less than $300k a year and wanted a little taste of the good life—and then the one-tenth of one-percenters who just wanted to chitchat over a nice glass of Petrus Pomerol and were willing to drop a thousand bucks or more to do so.

That evening I had a handful of tables, a few six tops, a quad, and several deuces. At one of the tables in the corner, I seated two women, and they ordered a relatively rare and expensive Margaux. The woman ordering for them was late forties to early fifties, dressed in understated but elegant designer clothes. She pulled an Amex Centurion card out of her Prada clutch and laid it on the table. I had only seen Centurions a couple times and knew that anyone qualified to pack that little black titanium bauble was a seriously heavy hitter. She spoke perfect English with a lovely French accent. I got their wine and returned. They thanked me.

Over the next half hour, I noticed them looking my way quite a few times and chatting as if they were talking about me. It made me a little self-conscious. I checked in on them probably a little more than I normally would because I could feel their eyes on me.

On one of my passes to pour them wine, I was about to leave when the French woman stopped me.

“Do you enjoy working here?”

“Is that important? Oh, and what is your name again, sorry?”

“Emily. And what? Is making money important?”

I had to laugh. Well, duh, lady with the frickin’ Centurion card.

“Is this your only job?”

I thought she was getting a little personal, but I didn’t want to insult her. Women don’t usually tip as well as men, but I had a feeling they would leave me a good tip if I played along. In my head, I figured that the bottle of Margaux, a four thousand dollar tab, would give me a minimum five, six hundred dollar tip. I’d answer a ton of stupid questions for that kinda money, given my take home after tipping out to the busboys and kitchen staff was around eleven or twelve hundred on a good week.

Their faces lit with excitement. The French woman’s friend was American. She asked, “What kind of law do you want to practice?”

That was easy. “Product liability.”

They smiled. “An altruist,” cooed the Frenchwoman.

Her friend offered, “One of my exes was an attorney. International law.” She looked to her French companion. “We know a couple of lawyers, don’t we?”

The French woman smiled as if that statement carried a river of undertone, then her gaze studied me intently.

“So, Emily, do you ever run across interesting opportunities while working here?”

I didn’t get her question, and my blank expression told her so.

“I mean,” she continued, “with all of the wealth that walks through your doors, do opportunities ever present themselves?”

“Like for other jobs? I’m not really looking for—”

She cut me off.

“No, no, mon amie, opportunities that might give you an…advantage. In your life.”

“Not really. I mean I get guys hitting on me a lot, especially after three or four glasses.”

“I’m sure they do. You’re very beautiful. How old are you?”

The women glanced at each as if that had some meaning.

“My name is Colette. Colette Marchand. This is Genevieve Stein. I run a business, and I often need special young women like you.”

I knew I was pretty good-looking, but others often argued I was one of the most beautiful women they’d ever met—from my boyfriend, to fellow waitstaff, to customers, and particularly the aforementioned guys trying to pick me up. Maybe it was my intense blue-green eyes. People on the street would even take snapshots of me, then ask who I was. I’d just say “Emily, ” and they’d walk away as if they’d mistaken me for someone important.

“Emily,” Colette said, lowering her voice discreetly. “Do you have a lot of tattoos?”

It was a question from so far out in left field it was in the stadium parking lot, but it didn’t bother me.

Colette beamed as if that were the perfect answer.

Floribunda and the Best Men
Lark Westerly
In Shelf
$4.99