Melech Sheehan is a hybrid warrior descended from the most powerful paranormal families. For over one thousand years he believed that true mates didn’t exist for his kind. Unexpectedly, in the aftermath of a battle between his warriors and rogues, he meets the human destined to complete his soul. As the pureblood races ride his back to become king of the paranormal community, Melech needs to accept his bloodlines while winning over his mate.

Shai Liv, an empath and healer, is always bombarded by others’ emotions. When he meets the leader of the Sanctuary Warriors, for the first time in his life he finds peace and comfort in another man’s touch. However, learning to trust and bond with his powerful warrior is only one of the most difficult obstacles life hurls his way. The second is finding his abducted friend before time runs out, and the third is understanding that submitting to his dominant mate doesn’t equate to being owned.

Noise crackling through Melech’s com-link grabbed his attention, pulling him away from his thoughts. “Hey, Mel. You there?” It took a minute to adjust the earpiece and move it to a more comfortable position. “Mel? You ok, boss man?”

He despised the modern convenience, but most of his men hated mind-speaking unless the shit hit the fan. Some of the men also didn’t have the ability to respond mind to mind. His brain seemed to be wired very differently compared to most paranormals. Ever since the scientists played around with his DNA he was still discovering new abilities. “Come in, your highness.” Ariel’s deep, gruff voice finally came in loud and clear through the link.

Mel grumbled under his breath. His closest friend and second in command knew what buttons to press to get under his skin. He knew how much he hated references made to his royal lineage. “I’m here, jackass. What’s happening at your end?”

“Jackass? Come on, you royal pain in the ass, can’t you do better than that? You’re slow tonight, Mel.”

“Ari, shut your hole and tell me what’s going on.”

Laughing softly under his breath, Ariel responded, “All quiet here right now, boss man. But Danni is getting one of his gut feelings again.”

Mel tensed at his second’s answer. Daniel, like the other hybrid warriors, was a force to be reckoned with. Each warrior was not only large and strong, but he also had one or more gifts. Daniel’s gift happened to be the one of sight. The man’s predictions were so accurate it was frightening. Even his gut instinct was nothing to scoff at. “Has he seen anything or is it just a feeling?”

“Just a feeling. He’s out scouting with Zeev right now.”

“Are all the men accounted for?”

“Yeah, man, everyone is fine. But I know what Danni means. I don’t get it. It feels like all hell is about to break loose, almost like big changes are on the winds.”

“I’m going to scout around on the west side. I’ll meet up with all of you centrally down by the bars and clubs. If there is any trouble, just call to me.”

“You got it. Later, boss man.” The com-link went deathly silent as soon as Ariel signed out. Melech took a deep breath and looked up toward the moon to clear his mind before heading out on his mission.

This was always his favorite time of night—halfway between dusk and dawn. Darkness seemed to be at its peak, enshrouding him. Hiding in the shadows made him feel invisible and allowed him to observe the world around him. Standing high on the rooftop, Melech Sheehan lifted his face to feel and taste the breeze. With his extremely heightened senses he could decipher the happenings of the area. Listening to the sounds and inhaling the scents carried on the winds, filtering and digesting the information, was the best way to hunt and to protect.

So far tonight the winds were telling him it would be a quiet night. He focused on the scents and sounds, shuffling through the noises and smells. Analyzing his surroundings was second nature to him. There were no odors out of the ordinary tonight. He had to tune out the old man’s snoring from someplace in the building he stood on. The sounds of moving vehicles were quickly ignored. The laughing and drunken slurs from people leaving the bars and night clubs from a few blocks away were skimmed over. It sounded peaceful. The world in this town just outside of Buffalo, New York, seemed to be in balance at the moment. But he knew in the blink of an eye that could all change.

Melech rubbed at his temples, trying to relieve the headache forming behind his eyes as he allowed himself to get lost in thought while things were still quiet. Over the past few years he started feeling restless, as though he were incomplete. He was tired of flowing through life feeling alone. He was so tired of living and just existing. He had stopped keeping track of how old he was and couldn’t even remember his exact date of birth. If it weren’t for the warriors that were more like brothers rather than fellow soldiers, he would have asked his second–in-command, Ariel, to help him end his days. There were too many people counting on him. Not to mention the pure race councils and the scientists that kept riding their backs, trying to monitor their every move. He just had to hang in there for a little bit longer, make the world a better and peaceful place for his men. Then maybe he could talk Ariel into laying him to rest.

According to the councils governing the paranormal community, he and his men were considered mutts or mongrels. The scientists loved using the more conventional term hybrid as a description. The councils looked down their noses at him for being a hybrid, but in actuality they feared him because of everything he represented. If the council could have their way, their greatest wish would be to behead him and burn him at the stake to make sure he would never rise again. On the other hand the scientists would like nothing more than to get their hands on him again. They would love to study his DNA, his abilities, and the effects their gene therapies had on him. The scientists were so smart that they were stupid. They had abducted him and experimented on him because of his vampire and shifter bloodlines. Their geniuses enhanced him and awoke latent abilities. But apparently they did their job too well. They were still trying to figure out a way to recapture and contain him. Ever since they tweaked his DNA, escaping their traps and facilities had been easy as pie.

“Please, Melech. I need you. Will you touch me?” He pulled the huge man closer to him. So close he was able to feel Mel’s large semierect cock through his pants. He knew Mel wanted him as much as he wanted Mel. He could feel Mel’s cock grow larger and see it straining behind his pants zipper. Shit, the guy was probably huge. Shai usually enjoyed being a top, but for some reason all he could think about was feeling this man inside him.

“Are you sure, Shai? Once I start I can’t stop, especially once I get inside your gorgeous ass. There will be no going back after this.”

Shai’s cock got harder and thicker when he heard the man’s voice, husky from his underlying arousal. “I’m sure, big guy. I need you. Even if it’s only this one time. Please, Melech. Just go easy.” He shyly looked away. Shai’s skin heated and he knew he must have been bright red from blushing. “I’ve never bottomed before.”

Melech let loose the sexiest growl Shai had ever heard as he advanced on him. He got lost in the man’s touch. His soft, wet mouth tasted of honey and coffee. He never wanted to stop kissing this man. When Melech pulled away Shai whimpered and tried to follow him. “I just want to get my shirt off.” He unbuttoned his pants before pulling the tank top over his head. The two men came back together chest to chest and shared another kiss. Ending the lip-lock, Melech drew his tongue to Shai’s ear, licking and nibbling the lobe before he went to grab Shai’s nipple between his teeth. After scraping the small bud, Mel laved and soothed it with his tongue. Shai groaned from the simple pleasure and pain.

“I need inside you so bad, little one.” Melech continued licking and scraping his skin with his canines and incisors as he moved his hands to drag down Shai’s pants. His engorged, erect cock sprang free. He moaned in pleasure when Melech’s large hand gently but firmly palmed his shaft and swiped it from base to tip. Before Mel’s fingers reached the crown, drops of warm, wet pre-cum leaked and dripped from his slit.

Melech kneeled. The warrior was so tall his head nearly came to his chest. Shai nearly came when Melech leaned down, bent his head, and licked the slit and crown of his cock, lapping his pre-cum. Shai was starting to go out of his mind with need. He needed his touch, he needed to feel Mel fill him, and he needed to come and soon. He was so lost in his need he didn’t feel Melech pull away until cold air replaced the burly man’s warm mouth and body. Frustrated and pissed off, he nearly screamed at Mel until he realized he was walking back toward him with a bottle of lube.

“Please, Melech. Just take me. I can’t take it anymore. I need your cock in my ass.”

“Patience, little one. I’m large and don’t want to hurt you.”

Melech dragged his own pants off before moving Shai to the bed. Shai swallowed as he stared at the other man’s prick. Yep, he was absolutely stunning and appeared to be hung like a horse. Mel didn’t give him any time to think. Quickly, he pushed him down to lie on his back and went right back to licking his cock. He parted Shai’s legs and drew his ankles over his shoulders as he licked his sac and drew each ball into his mouth.

Shai kept moaning with pleasure and need, so turned on he barely noticed Melech pushing a lubed finger into his ass. He felt the large appendage poke through his muscular ring and sucked in a breath of discomfort. He felt his erection flag a little until Mel’s mouth did the unexpected by taking the entire length of his dick into his mouth. He became hard as nails again, especially when he felt the big man’s throat swallow around the head and shaft of his cock. So busy was he glorying in the sensations he didn’t realize the big man was now using two fingers. It wasn’t until he used the third finger that he started hitting his sweet spot. Sensations like never before filled him. The pleasure was beyond amazing, and Shai found himself pushing back on Mel’s fingers, trying to ride them and take them deeper. “Oh, shit. That feels so good.”

“You can’t come until I’m in your ass, little one. I think I may have to teach you patience.” Melech’s fingers filled him, stretched him, and pleasured him, but they weren’t satisfying. When his lover was near ready to enter him he gave warning. “I can’t wait to get my cock in your tight ass, green eyes. I’m going to go slow. Tell me if I hurt you and I’ll stop.” The sexual tension and need was heard in the strain of his words. 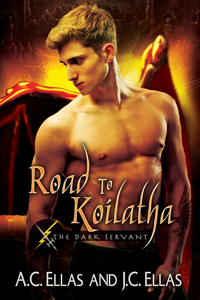