The Winds of Love (MF)

Taking on the forces of Mother Nature for some thrill seekers is a simple task. However, when simultaneously engaging the power of Cupid, relationships become complicated. For while the fury of Mother Nature can be embraced to a point where mere survival is questionable, Cupid, on the other hand, never accepts defeat.

A reporter and a camera woman, who were ex-lovers, get caught up in a chase to document the world’s best kiteboarders. These guys dominate the high winds generated by a hurricane passing by the southern tip of the Florida Keys. While most people flee Key West, this select group of thrill seekers relishes the adventure of a lifetime. When the hurricane takes a dangerous turn and surprises everyone on their way back to Miami, there is nowhere to hide. They can only draw on their inner courage, and each other, which quickly reunites a lost passion in the process.

The Winds of Love (MF)

Mack Stevenson stepped aside as another reporter brushed past him. The lucky bastard nabbed the assignment he would have loved to handle. Mack glanced at the weather reports flashing on many screens around the station. The tropical storm racing across Florida was spinning tornadoes all over the state, and especially along Interstate 4 between Orlando and Tampa. His shift was over. He was available.

While he normally left immediately after his anchor job ended, Mack lingered, hoping to have a shot at what he really wanted to do. While field reporting wasn’t part of his contract, he knew he could handle this as an independent newscasting assignment. One day, he would break away. One day, when he acquired more experience and enough money to live on for a while until his own production company would be profitable.

Jacob Reeder, the owner of the station, rushed through the newsroom and glanced at Mack. “I see you’re still here.”

Madison, Jacob’s daughter, followed closely behind, her conspicuous, unwavering gaze locked in with deadly precision on Mack. While it had been a long time since they had dated, Madison’s defiant stare confirmed she never forgave him for their breakup.

“Wow, this storm’s building.” Mack waved at the screens behind him.

“Right, you’ll have lots to talk about tomorrow.” Jacob moved closer to the screen and yelled at the production manager. “Damn, that’s a lot of territory to cover.”

Mack walked closer as Jacob turned to him. “I know what you’re thinking, Mack. But right now I don’t have a crew to send with you.”

“All I need is one good cameraman. We can edit the footage when we get back. Just tell me where you want me to head.”

“With this storm, who can guess? Every camera we have is in the field already.”

That wasn’t totally true. Madison worked as the director of photography for Jacob’s string of TV stations. While she managed many cameramen working under her, she still could go into the field if necessary. Knowing his offer would be rejected, Mack still glared at Madison strong enough to catch Jacob’s attention.

Madison pushed the palm of her hand forward. “Don’t even go there.”

Mack assumed she would react like she did, but still the storm flashed on the screen. “Just give me a camera and a tripod, and I’ll do what I can.”

“That would be a joke, and you know it.” Madison glared at her dad. “I don’t have any more cameramen available.”

Another man yelled across the room. “We have another report of a sighting on the ground heading toward Auburndale.”

Mack glanced at the screen. “I can make it in front of the storm if I leave now.” He removed his iPhone and checked the attached camera. “Any photo will be better than nothing. I’ll call you soon.”

“Don’t be stupid. You can’t go running blind in front of a cluster of tornadoes.” Surrendering, Madison stretched both hands in front of her. “Okay, I’ll go with you, but only this once. I know we need the coverage.”

Mack grinned at her, hoping to convey his appreciation. “Thanks.”

“Listen, I’m not doing this for you. I’ve an extra rainsuit in the van. You’ll need it.” She turned to her dad. “Stay on this and help direct us close, but not too close. We need a few minutes to set up when we reach the interstate.”

“You got it.” Jacob smiled and rushed out of the room.

She raised her head and focused on him patting a pillow beside him as he added, “It really feels good inside.”

“I hope so.” She rushed over and slipped in the bed. His arm rose toward the top, making room for her to rest on his shoulder. His muscles excited her while his naked skin merged in with hers. The moments of cooling her passions vanished as she returned to the heat of the shower. It wasn’t the water providing warmth this time. It was his body. Like a giant sponge, she absorbed his heat.

Mack ran his hand through her hair. “You smell so nice after a shower.” His fingers scratched her scalp and massaged it briefly before pulling her head tighter to his bosom. She felt his breathing generating a hot and heavy gust of passion which flamed her throat.

She wondered what she was doing. This was real. She was locked into a world she could not escape, one she had both dreaded and dreamed of. Her mind swirled to take in each sensation which built like a crescendo, taking total control of her mind and soul.

It felt so natural to have her breasts mashed in close to him. With every part of her body available wrapped around him, she breathed slowly, savoring every scent and every sound. She massaged his chest with her hand as she studied his muscles and devoured the texture of his skin. She kissed his skin as his taste added one more level of intimacy.

The gentle massage he continued to give her scalp almost allowed her to drift to another world where fantasy and relaxation merged. She had questions for him but pushed them aside for now. She wanted to crawl inside his skin, to swim in his veins, to understand exactly who he was. Today and tonight she wouldn’t hesitate. Tomorrow would be another thing.

His hand rose to graze her skin as he centered on her breasts. She never knew them to be so sensitive. The slightest touch released shivers, fluttering along her skin. His hand cupped her as he massaged her flesh. His fingers on her nipple shot waves of electric joy pumping through her nerves.

“Ouch,” she heard him utter, and she realized she had dug her nails deep inside his skin on his chest.

“Sorry, your fingers are driving me wild.” She turned the palm of her hand and rubbed his chest before gliding her hand lower until she found his cock. It quickly regained its pride and stood at full attention for her. Moments of déjà vu crossed her mind. It had been a long time ago. But memories revived as she stroked him. He had been her first. Sadly, in a way, she had not received much experience during the last ten years. She forced her mind to close off his marriage and what he had been doing for the last ten years. Yes, she knew he had fucked his wife. He had to have. They were married.

Mack shifted his weight to face her as she raised her knees and wrapped her legs around his muscular body. She felt ready to inhale his cock inside her but planned to enjoy every moment of this time. While he thrust toward her, she held him and prevented him from penetrating her.

Lowering his hand to her pussy, he touched her slightly at first. As he explored, she opened to him, allowing him to have full access to her. When he pressed her clit, she screamed. Almost embarrassed, she never squealed before, well, at least since she was six or seven. He didn’t allow her time to recover as he locked his radar in on her pussy. He knew how to massage the inside of her pussy with his finger. Damn, he felt good. He had become very attentive.

She pressed closer to him and devoured his lips again, sucking on his lower lip to the point she hoped she didn’t cause permanent damage, but he was leaving her no room to catch her breath.

The last time they made love, he told her he loved her. The words rang out from her past. The reconnection seemed so seamless, so perfect. She concentrated on their good times.

“I want you.” She couldn’t resist him then, and she sure the hell couldn’t now. Tightening her grip on his cock, she wanted him inside her and directed him toward the goal. She felt the tip nudge her, but she needed to adjust to a better position. Rolling on her back, she spread her legs, leaving no doubt what she expected next.

He rose on one elbow first and kissed her neck, nesting in her sensitive nape area again. After climbing on top of her, he now rested his weight on both elbows, which was something she appreciated, knowing how much heavier he was than her. She met his steadfast gaze. What was he thinking?

He answered in action. His pelvis thrust forward, centering his target and entering her pussy immediately. Another yell exploded from her lips. She couldn’t help it. He thrust again, and she bit her lip to control this scream this time. While ignoring a slight pain in her knee caused by not wearing her brace for a while now, she wrapped her legs around him and encouraged him to go deeper. Her blood pressure soared as the energy rushed to her head. 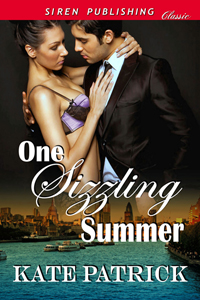 Follow Me (MF)
Tymber Dalton
In Shelf
$4.99
Tweets by
sirenbookstrand