Blue thinks her life is pretty awesome—after all, she has two sexy boyfriends and an exciting career scaling walls and breaking open safes. What more could a woman ask for? So what if her boys are cops and she’s a thief? They haven’t arrested her yet, right?

Matt and Liam love Blue to distraction, but when one of her throwing blades turns up sticking out of a dead thug’s body, their acceptance of her lifestyle faces its biggest threat. They think she’s been framed, and saving her life is more important than arresting her for murder, but old habits die hard. And unfortunately, Blue isn’t the kind of girl to let someone else take the heat for her problems.

Can their love survive murder, an unexpected surprise, and a dirty cop bent on silencing the thief who can expose all of his despicable plans?

Liam slid his hands into Blue’s hair, savoring the softness of it. Sometimes he couldn’t believe she was real. She felt like everything he’d ever wanted, but didn’t know he could have. Blue was strong yet feminine, intelligent yet sweet. She could take care of herself, but she also knew how to let him and Matt take over when she’d reached the end of her rope. He loved that about her. He loved that she trusted them so much.

“Blue, you’re so beautiful,” he told her, kissing down her jaw. “I want to fuck you until you can’t move.”

She laughed, winding her arms around his neck. “Is that even possible?” she asked, unconsciously echoing her earlier question.

He grinned. “Let’s find out.” He gently stroked the skin beneath her ear with his thumbs, then kissed her again. He couldn’t get enough of her.

“You two come up with the best plans,” Matt said, reaching down and pulling up Blue’s shirt. Liam let her go so his partner could take it off. She sighed as he slipped it up and over her head.

Liam groaned when he saw that she was nude except for a tiny pair of purple silk panties. “Wow.” He sucked a kiss onto the mound of her breast, then moved down to the nipple. He played with it until she gasped. Matt grinned at him over Blue's shoulder.

“Put her on the bed,” Matt said, hands on her hips. "Let's see what she does when we’re both doing that.”

“Hey. She can hear you talking about her,” Blue said, hands curled over Liam's forearms.

He licked her nipple again, then bit it. She gasped. Liam picked her up and tossed her on the bed. She bounced, glaring at the two of them.

“Are you ganging up on me?” she asked, hands on her hips.

Liam shook his head. She looked adorable. And sexy. God. He reached down and adjusted his erection. “Yes.”

Her eyes flashed. “Payback is a bitch, you know.” She trailed her fingers down her waist to her mound. Liam’s mouth went dry when she slid a few fingers under the fabric to play with herself.

“Christ,” he muttered, swallowing. He took off his sweater, pulling his undershirt with it. The look on her face when she saw his bare chest made him feel ten feet tall. “We’re going to make you feel so good, Blue,” he murmured, popping the button on his cargo pants.

“What?” she asked, staring at his groin.

Matt chuckled. “Don't worry about it, honey.” He slipped out of his shirt and jeans, then crawled up the bed, distracting Liam with his absurdly tight ass.

“Jesus," he thought, flushing. Between the two of them, I'm going to break something in my brain. He shook his head, then joined Matt on the bed. Together, they suckled her breasts. She tasted sweet.

Blue cried out, her spine arching. Liam licked his lips and shoved his pants off. His cock bobbed up, already aching.

“Hold her arms, Matt,” he said, biting down her waist. He licked her bellybutton, then slid between her legs.

She panted and licked her lips when he reached her mound.

“Open for me, honey,” he said, looking up her body. Matt was on her knees above her head, holding her arms. His cock jutted out near her cheek. Liam closed his eyes briefly, fighting for control. Blue did as he asked and obediently opened her legs wider. He leaned down and breathed over her mound.

“Come on, Liam,” she begged, twining her legs around his shoulders.

He shook his head, gently scraping at the purple fabric over her clit with his finger. She was so aroused he could see the outline of her bud through the silk.

“God,” she burst out, trying to shove her hips at his face.

He chuckled as he pulled off her panties. “Gorgeous,” he said, taking in her pink pussy. He licked her clit, then gently took the hood between his teeth and flicked his tongue over the tip.

Blue went wild, writhing and crying out. He smiled, then did it again. And again. Her pussy was so wet he had no trouble sliding his fingers inside. He pressed up against her G-spot, then suckled her clit until he sensed she was right on the edge.

“Suck Matt while I suck you, Blue,” he told her.

She looked down at him, green eyes heavy with pleasure. He smiled and she took a deep, shuddering breath, then tilted her head to lick along Matt’s length. Matt leaned over her and groaned.

Liam watched, wondering what his partner tasted like. “Does he taste good, Blue?” 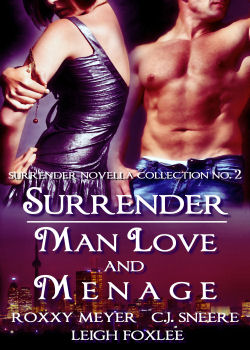 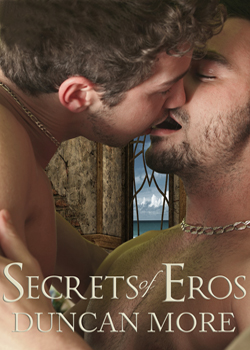