Parker, Madden and Kade, angel warriors, find their destined love, Perry Tobin, in time to save her life. After fighting for six-thousand years to keep humans safe, they finally have their reward.

The monster they defeat, however, seeks retribution for the death of her children and plots to kill the entire angelic host.

While the demon waits in hell to exact her revenge, Perry has to accept that angels are real and that she’s fallen in love with three of them.

A prophecy from one of their angelic host foretells Kade’s death at the hands of a creature no angel has ever before encountered.

While Kade has lost his sight in the fight against demons, he never once gave up the hope that he’d find his mate and live for eternity with her. He enters into what may be his final battle with hell, determined to stay alive for Perry. 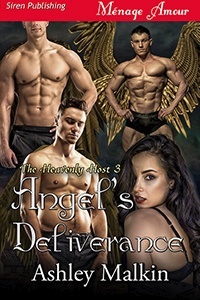 More From The Heavenly Host

Three huge men squatted by a roaring fire, their filthy, tattered leather dusters dragged in the mud behind them. Beside the fire lay the naked body of a woman. The bloody and gaping wound across her throat made it impossible for her to be alive despite the terrified expression that was fixed on her face.

Only when the three men turned to stare at her did Perry realize she’d spoken the denial out loud.

“Catch her, and you can eat her heart, Wayne,” one of the men said, an evil grin spreading across his wrinkled face. He licked his bloody fingers, smearing blood onto his jagged black teeth.

Adrenaline flooded Perry’s system and freed her from her horrified stupor. Perry spun around and ran. Her scream of fear lodged in her throat, choking her as she desperately gasped for air. She’d taken only a few steps when the storm returned as quickly as it had vanished. The rain was a vicious deluge, the constant thunder so loud it hurt her ears.

It felt as if she was wading through mud as she struggled to run through the torrential rain, and she knew she wasn’t moving fast enough to escape. While her instincts had her fleeing, her mind acknowledged it as pointless. She was going to die. She was going to be eaten.

She screamed as something hit her back, hard, and she was knocked to the ground. Despite knowing she couldn’t fight off three huge men at once, Perry rolled over with her fists raised. Tiger nudged her hands and whinnied pitifully. Her baby hadn’t abandoned her. Tiger looked terrified but had still come back for her. Her horse may just have saved her life.

Grabbing the soaked reins, Perry stood and leaped into the saddle. Tugging on the reins, she dug her heels into Tiger’s sides. “We need to fly, Tiger.” Tiger didn’t need any more encouragement than that. The horse ran pell-mell into the rain, away from the men. Perry wanted to cry as hope filled her. Perhaps she wouldn’t die today.

Kade had not given up. His mate needed him­– he’d never give up. As he clutched the locket tightly, he saw only that same small glimpse of her riding a horse, then Rayder’s prophetic vision replayed in an endless, torturous loop that Kade would not relinquish until he held his precious mate safely in his arms. The vision held no clue as to when the events would occur, only that they would. Rayder’s visions always came to pass.

When Kade watched the vision of the small, beautiful woman on the horse, his heart ached. Her terror was palpable, even in the vision, as the swirling black clouds surrounded her. The cloud appeared to have sentience, somehow, its intent to consume her. The woman in that vision would die if they didn’t find her in time. His woman would die.

“I need to feel your skin on mine,” Madden said, kissing Perry’s neck and making her moan, too.

“I need you too,” Perry said, kissing his neck, his chin, his lips.

Her clothes vanished, as did the rest of his, and they tumbled together onto the warm, soft sheets of the new bed in their new bedroom. The bedroom they’d enlarged to accommodate the huge bed they’d now share for eternity.

Kade and Parker appeared beside him, naked and with their wings spread wide. Perry gasped and stroked her fingers through Parker’s feathers. Loving the delight on Perry’s face, he released his own wings.

“We’re yours,” Kade said, lowering beside them and cupping Perry’s face.

“And I’ll be yours forever,” Perry said. “Until you found me, nothing in my life felt right.”

“And now?” Parker asked, reclining on their other side.

Madden stared down at the vision beneath him and used his knees to spread Perry’s naked legs wider. Madden ran his hands up the creamy soft perfection of her legs. He got his first glimpse of her bare and glistening pussy and growled loudly. He was conscious that he’d sounded similar to Parker’s lion and didn’t care. Perry was going to be their mate, and nothing else mattered.

He knew the mechanics of making love as he’d had the time to read a lot of books in six thousand years, but his first experience was going to be with his mate, as he’d always wanted it to be. Looking at her now, he knew he’d have easily waited another six thousand years for her. She was perfection.

“I have never felt so turned-on,” Madden said, kissing Perry’s stomach softly. “Never dreamed I’d want this desperately for anything in creation.”

Perry took a deep breath as her gaze slowly roamed down his body. His cock jerked when she licked her lips, a bead of pre-cum oozing from the tip.

“You’re very big,” she said, her gaze flicking to each side. “You all are.”

“We’ll fit,” Kade said, kissing Perry’s lips briefly and smoothing his hand down her neck to her breast. “We were made to be together.” He teased the hard bud of Perry’s nipple with his fingers, twirling, pinching, and she squirmed as her pussy leaked more juices onto the plump lips of her sex.

Madden needed to taste her arousal, and his mouth watered as he lowered himself to lie between her thighs.

Perry tensed, but Parker soothed her with a kiss, moving his hand down to her leg. “Madden needs to taste you, sweetheart. Let him make you come. It will ease the way for his cock.”

Madden about lost his mind when he visualized plunging his throbbing cock into the warm heaven only inches from his nose. Then he absorbed the message Parker had given him. His brother was a moody, surly asshole, but he was also the kindest person Madden knew. He was telling him how to make sure he didn’t hurt Perry and also that Madden was going to be making love to her first. They would lose their virginity together.

“I’ll make this up to you someday, Parker,” Madden said into his brother’s mind.

“For thousands of years, you have kept me from turning into an angelic beast that needed annihilating. There is no debt, brother.”

Without another thought, Madden gave in to his need for his mate. Perry had been theirs from the moment they’d found her, but now she was going to be a part of them. The mating would bind their cells, even though their hearts were already inextricably entwined.

Six thousand years of fighting had seemed interminable, but with Perry here in their bed, in their arms, it had been worth every second they’d waited. She was more than a reward for fighting for humanity. She was Perry. She owned him, would be a part of him, now and forever.

Closing his eyes, Madden ran his tongue over Perry’s glistening folds. Her taste exploded on his tongue, igniting need in his every cell. Maintaining control of his desire was easy, thanks to Parker’s guidance. He licked, sucked, learned what felt good–and what felt incredible–for Perry, and learned there was immense gratification in giving pleasure.

When Perry’s orgasm peaked, he had two fingers in her tight pussy as he sucked her clitoris. She rocked her hips up tighter to his mouth, and her pussy clenched his fingers rhythmically.

Madden moved at angelic speed to kneel between her thighs instantly, his cock at Perry’s entrance. 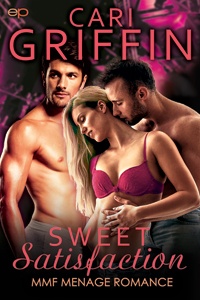