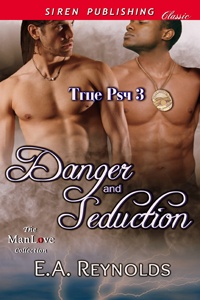 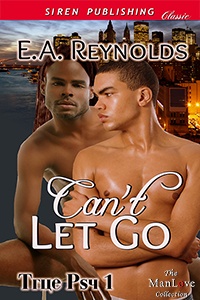 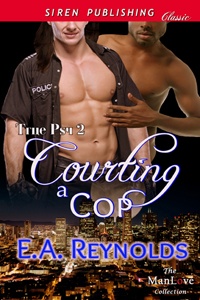 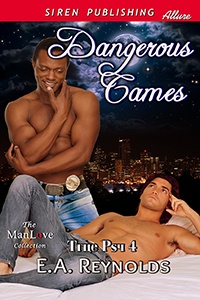 A hard body brushed against his left side at the same time a melodious wave washed over him, telling him the man who’d come up beside him was a telepath. He was strong but not a Principal, for Principal telepaths gave off a less musical sound. Kinsey curiously turned his head and his indigo gaze collided with warm, chocolate eyes that made his little heart skip a beat and his mouth go dry as a bone.

Son of a bitch.

That was the last thing he needed or expected to happen with his nerves slightly on edge tonight. The man was gorgeous with a sharp angular jaw and long lashes fringing those smolderingly hot eyes.

“Excuse me, man,” Atienne said and Kinsey watched those full lips move, thinking of slow kisses and cold nights. “Skipper, I need a beer.” The man looked away as he spoke.

“Coming up, baby,” he called back.

Kinsey’s gaze slid shamelessly down the long, lean form leaning carelessly against the bar next to him. He drank in the powerful line of his back, down to the tight ass smoothing out to long legs. This is a man who worked out and took pride in his body, he thought, bringing his gaze up to the back of the stranger’s neck to lick over the smooth, light chocolate of his skin.

There was nothing like a black man’s hard body and chocolate skin. ’Course, one of the things he loved best about them was that they came in so many different shades of chocolate and brown sugar. He loved the way most of them wore their hair too and this man was no exception, with his black hair cut short and well edged with a curly texture.

“Here ya go,” Skipper said, and set a glass of soda on the bar along with a bottle of beer. “I hope you got a ride.” He cocked a brow at Atienne.

“It’s only my second,” Atienne retorted as he turned his gaze on the man sitting to his left. “Buy you a drink?”

“I’ve got one,” Kinsey answered, meeting his gaze.

“Put it on my tab, Skipper,” he said to the bartender, who nodded before moving away.

“Thanks,” Kinsey said, giving him a tentative smile. He had to keep things easy. He couldn’t take unnecessary risks no matter how cute the guy was.

“Here alone?” Atienne asked, and brought his beer to his lips.

Kinsey’s eyes followed, and he found himself licking his bottom lip, pretending he was swiping his tongue slowly over the full lower lip of Mr. Sexy-Chocolate-Eyes. Their gazes met over the end of the bottle, and he caught his breath at the flash of hunger that briefly danced in the man’s eyes. His skin heated, and his arousal gripped him in a hold strong enough to startle him. It wasn’t just the physical reaction that gave him pause, it was that odd feeling stroking down his spine, making his stomach tight and his palms dampen as if he were on the verge of a precipice of something new.

“I–uh–I am for the moment.” Kinsey was surprised at how breathless his voice came out and how disconcerted the man left him.

“Really?” Atienne leaned toward him, resting his elbow on the bar.

Kinsey nodded, not trusting his voice. It had been too long since he’d met a man who got him twisted up inside.

He shrugged. “Thanks.” He allowed himself to lean just slightly forward. There was something about this stranger that drew him unlike any other man he’d ever known, but he had to be cautious, take his time. He had so little of it to play with it would be best to get the most of it—safely.

“If you were my boy, I’d never allow you to come to a place like this without me,” Atienne murmured.

“Why not?” The man didn’t strike him as insecure enough to try to cage his lover.

Atienne’s gaze stroked slowly down his seated form and Kinsey felt exposed in spite of being fully dressed. “You’re too damned good-looking, that’s why, and I’d never trust any of the dominants here not to hit on you left and right. As a matter of fact, I can see plenty of eyes cutting their way over here hoping I get up and leave, so they can sit down next to you.”

Kinsey shrugged one shoulder as he looked sideways at the other man. “You don’t strike me as insecure.”

Atienne laughed, picked up his beer, took a healthy swig, and wiped his mouth on the back of his hand. “I’m not, gorgeous. I am a little territorial. I don’t share well,” he explained at Kinsey’s frown.

“Sounds like a recipe for disaster.” Kinsey’s eyes darted past Atienne before he turned his head to look toward the door. A meeting in public had been a bad idea and everything told him that not even meeting this hottie, the dance that left him alive, and the feeling of freedom were going to change the course of his evening.

Atienne tugged on his hair hard enough to draw his gaze back to his at the same time, distracting Kinsey from his fears that the Separatists had changed their minds. “Don’t.”

“Too bad you can’t make up your mind whether you want me or one of the others in the room,” Atienne retorted coolly and picked up his beer. “Have a good time.” He gave him a nod and was about to start forward when the slighter form blocked his path.

Atienne shifted on the bed but didn’t take his hand from his pants. “Come in.”

Kinsey opened the door and dim lamplight poured out to greet him. Atienne stared at him standing there clad in a T-shirt that fit loosely over his chest and barely fell to cover his lean thighs. The prick in his hand seemed to get harder as his imagination wondered what was beneath that shirt.

Kinsey’s gaze dropped to his hand, and Atienne unashamedly splayed his legs a little wider. He watched his expression tighten in lust.

“Did you want something?” he asked, moving his hand on his cock.

Kinsey brought his eyes back up to meet Atienne’s and brushed his hair over his shoulder before he started forward. Atienne had to give him credit. He was certainly keeping his cool. His pretty eyes were expressive and telling, letting him know the man knew what he’d walked in on and wasn’t about to run away.

“I was wondering what time we were getting started in the morning,” he said calmly, though his gaze darted to Atienne’s tented pants.

“Five. We can get out before it gets too light,” he answered.

“Sounds okay,” Kinsey said. “Will the safe house be stocked or will we have to stop for food?”

Kinsey licked his lips before saying, “You want some help with that?”

The lust suffusing Kinsey’s face had him saying, “Grab the condoms and lube from the dresser.”

Kinsey grabbed them and dropped them on the nightstand before he crawled onto the bed and straddled him. He played his hands over Atienne’s chest, scraping at the flesh lightly with his moderately long nails. He swept his hair to one side and tilted his head to allow the strands to trail over Atienne’s chest.

“Ahh.” He groaned as sharp teeth scraped over his nipple and nimble fingers pinched the other.

Kinsey’s tongue speared the flat disc and then circled it before his hot mouth closed over it. His tongue flicked at the nipple and then he lifted his head to give Atienne a salacious look from beneath his lashes. Atienne’s lips spread in a slow grin and Kinsey’s head lowered, but his eyes remained on Atienne’s. He swiped his tongue over the nipple his fingers had been pinching.

“Wicked baby,” he murmured and pushed his fingers into Kinsey’s soft hair. “Play with me.”

Kinsey swirled his tongue around the tiny point of nipple before sucking at it and then swiping it again. His teeth scraped over it and then he sucked it once more before kissing his way down. He planted wet kisses on the flat plane of Atienne’s stomach down to the waistband of his sweatpants. With both hands, he peeled them.

“Maybe you should kiss it and make it better,” Atienne rasped out.

Kinsey shifted and then lowered his head to run his tongue around the crown. Atienne hissed and Kinsey took the tip between his lips and sucked. Atienne’s hips jerked reflexively but his hold on his cock kept it from sinking too deep into Kinsey’s moist mouth.

“Fuck, ohhh! Kinsey, turn around,” he ordered. “I want your ass facing me.”

Kinsey lifted his head and Atienne helped him turn so Atienne had a good view of Kinsey’s ass. Kinsey was next to him on the bed while leaning between Atienne’s thighs. Atienne pulled the T-shirt up and found the man’s ass was covered by a pair of black fuck-me briefs that bared the firm cheeks of his ass tantalizingly.

He just loved a pair of booty briefs on a man. His hand stroked over one globe as Kinsey’s mouth closed over the head of his cock. “Suck it, Kinsey. Suck my dick.” His voice was a little rough as arousal poured through him.

Kinsey’s fingers closed around the thick erection, and his head moved up and down as he sucked and licked the thick veins running along the shaft. Atienne groaned roughly, getting lost in the sensual assault on his cock.

Kinsey tightened the suction of his mouth and his cheeks hollowed as he sucked and used his hand to work the flesh of Atienne’s dick.

“Oh, Gods.” He hissed softly. Kinsey’s hands were almost soft on his inner thigh as he stroked him. That tactile touch was an intimacy he missed and it made his body come even more alive.

Atienne slapped Kinsey’s ass lightly. “I knew your mouth would be better than my hand,” he admitted, and then peeled Kinsey’s briefs back, baring his globes fully to stroke his hand over them. He gave one cheek a hard slap and the warm honey skin began to blush. He squeezed the globe and slapped it harder. “Your ass is so fine, Kinsey. I got hard watching you work it on the dance floor.”

Kinsey took him deeper and lifted his head. “Is that what you were fantasizing about when I came in? Me dancing?”

“You were dancing all right.” His lips tipped in a grin, and he reached for the lube. “You were about to give me a lap dance.”

“I see,” Kinsey lowered his head, took one last swipe of Atienne’s cock and quickly tugged the sweat pants down and off before moving onto his lap.”

“Patience.” He tugged his T-shirt over his head and tossed it away.

On Target (MM)
Stormy Glenn
In Shelf
$4.99
Tweets by
sirenbookstrand