Heat Rating: Scorching
Word Count: 42,369
4 Ratings (5.0)
Historical
In Bookshelf
In Cart
In Wish List
Available formats
HTML
ePub
Mobi
PDF
Cover Art by Harris Channing
Reviews
A fantastic storyline with great characters
Jlg29
this was a entertaining, funny, loving, book...i love how the families entertwined and hope that more books will be written containing all the families. awesome job...i read this book in one night and i know this is a book i will read over and over again. i have books that bring comfort to me that i seek out when i want to get away...this will be one of them
it would make an awesome series. thank you
DEANNA
Read more...
Excerpt

It was late afternoon when suddenly the horse let out a loud whinny that about scared both women half to death and jerked them out of the half sleep they had both been in.

The thundering sound of other horses running and answering with screams of their own through the blowing snow scared them both even more, fearing that Angus had found them.

Now they were both wide awake and alert. Before they knew what was happening they were surrounded by huge men on even bigger horses. There had to be at least thirty of them if not more.

The men wore long animal skin fur-lined cloaks and their plaids, but they were not McGregor colors. The misty fog seemed to clear and the falling snow seemed to lessen allowing the women to see all the men. Some of the men had the hoods of their cloaks covering their heads. Those that did not had long, wild hair and wore fierce expressions.

Sarai sucked in the cold air at her first look at a highlander. A sliver of fear ran through her. They were just like her mother had described. Huge, fierce, savage-looking warriors.

“Well, look what we have here. Someone’s wee bairns seemed tae be lost in the storm,” one of the big men around them said with amusement in his voice.

“Ach and look at the bonnie wee pony. It donnae look strong enough tae can carry two riders,” another said.

“Bairns have no business out here. Yer folks ought tae tan yer hides for being out here by yerselves. Come on then, we will see ye home safe,” another said.

Bairns? Who were they calling bairns? Sarai thought as anger swept over her.

Sarai shoved her hood back a little, lifting her chin and ripped off the scarf covering her face as her horse suddenly decided it wasn’t tired after all. The animal decided to prance around, turning in circles as it reared up on his hind legs with its front legs barely coming off the ground. Banner made a deep noise in his chest and snorted as he tossed his regal head, feeling his mistress’s annoyance.

The two women missed the sharp intakes of breath as Banner reared up even higher almost in slow motion and stayed suspended in the air for a few seconds before coming back down.

When the horse reared up Isa cried out and grabbed at Sarai’s cloak to keep from falling off, pulling the hood of Sarai’s cloak off and the ribbon that held her hair up. Sarai’s long black hair came tumbling down around her like a dark silken cloak.

“We are no’ bairns. We donnae need yer help. Now move so we can be on our way,” Sarai told them as she fought the horse that decided to show it wasn’t intimidated by the much larger horses and the men surrounding them.

To the men around them the two young women on the small spirited dapple-gray horse with its overly long wavy black mane and tail looked unreal, magical.

No one said a word because they were rendered speechless.

The only sound was that of the wind and the snort and squeal of Sarai’s prancing horse. One of the men before them reached up and pushed back his hood before he urged his huge black horse forward.

The man took Sarai’s breath away and made her heart flutter in her chest. Her eyes met his and she couldn’t look away as he rode toward her.

His answer was a low growl she felt all the way through her body to her very core causing a rush of hot liquid dampen her thighs and ache for more of his touch. There was no way he could hide his body’s reaction to what she was doing to him since his kilt was tented when he lowered her to her feet and hugged her close, pressing his large hard cock against her.

Brayan realized they were alone once more and he noticed the food Isa had left them.

If he kissed Sarai again he would take her to his bed and he would not stop until he claimed her, which was what he wanted to do, but she needed to eat something and recover.

Sarai did not understand what was happening to her. Her breasts ached, her stomach fluttered, and she had this throbbing ache between her legs. She wanted Brayan to kiss her again and touch her all over, to touch her there.

She knew what was pressed up against her and it was huge. Now that frightened her a little, that and these strange feelings, but it made her curious as well. She looked up at Brayan, watching his face as she covered his thick hardness with her hand.

His eyes darkened and his breathing hitched. Without warning he growled and lifted her, taking her to the bed, covering her. He took her mouth with his own in a deep demanding kiss, taking her mouth as his hands went to the laces of her dress. Sarai was arching her back, pressing closer and moaning under him. His mouth never left hers as he peeled the dress down and off her body with only the thin shift covering her.

He pulled away long enough to stand up, lock the door, and strip out of his clothes with Sarai watching him the whole time as she rose to her knees on the bed. He kept waiting for her to protest but she did not.

Sarai watched Brayan move away ready to be disappointed that he was leaving her, but she saw him lock the door and then, dear Father in heaven, the man began to take off his clothes. Her lips parted and she began to pant as he underdressed in haste.

Brayan McKenzie was built like no other man she had ever seen. Compared to him they all looked like puny peasants. Thick, roped muscles rippled with every move. His skin was golden, marred by white scars here and there, but to Sarai even those were beautiful.

Then he dropped his kilt and, heavens above, the man was huge. Sarai’s eyes widened as a ripple of fear went through her worrying he would rip her in two, but her body thought otherwise as a liquid heat pooled between her legs and her nipples hardened. Her breasts heaved as her breathing became ragged.

Brayan almost groaned watching Sarai as he underdressed. She looked like a wild thing in the middle of his bed with her long dark hair tumbling around her. She was staring at him with her large beautiful blue eyes and her slightly parted kiss-swollen lips, staring at him boldly as he undressed without a hint of shyness.

Brayan knew she was a virgin, but he would have never guessed by the way she was looking at him. He didn’t miss the brief flash of fear in her eyes, but that was now replaced with heat in her eyes and it pleased him that he had been the one to put that look there.

Brayan went to her. His cock twitched and throbbed painfully with wanting her. He never wanted a woman like he wanted Sarai.

He pulled her up in his arms and jerked the shift over her head. With one hand he pulled the covers down. Then he lifted her and laid her down, but before he could join her she reached out and took his cock in her hands.

Brayan froze, watching her as she leaned forward and licked the head. He groaned deep in his chest as his hands went to her hair. Sarai rolled her eyes up at him, then surprised him again as she took him in her mouth, wrapping those sweet lips around him and taking him deep in her throat, but she couldn’t take all of him.

“Jesu, Sarai,” he said in a straggled voice.

Her hot mouth and wicked tongue had him trembling and ready to come. He wanted to be deep inside her when he did. 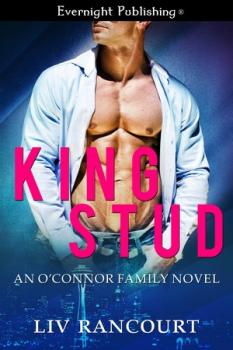