Broke and unemployed, Dakarai Williams couldn’t afford to say no to an unexpected offer to play a small role in a movie on Christmas Eve.

Everything about the role was weird. But Dak didn’t care anymore because he’d met the woman of his dreams, Ciara, only to have her fade in his arms… 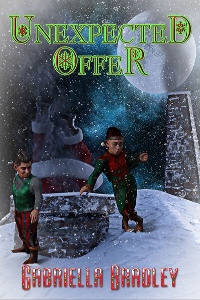 Dakarai John Williams—Dak for short—took a last look around his small apartment to make sure he’d packed everything. Out of work and unable to pay his rent, thanks to the pandemic, he’d had no choice but to give notice. Where he was going to go after the new year, he had no clue. Would the hospital take him back? At least he’d have a roof over his head during the holidays. He’d planned to go home for Christmas but only for two days. Now, he’d surprise his mother by staying longer...

The last thing he’d wanted was to go home with his tail between his legs. He could hear his mother now, those four dreaded words, echoed by his brothers and sisters, I told you so. And he couldn’t really blame them.

His phone rang. Quickly, he dug it out of his jean pocket and looked at the call display. His agent. Why would Tom be calling him on Christmas Eve? And rather late in the day. He grunted. To wish him Happy Holidays? Not likely. It wasn’t as if they were close buddies. Dak barely knew the man. They’d only seen each other a few times, first when Dak had signed up with Tom’s agency, then again when he’d been offered a couple of small roles in low-budget movies.

He stabbed at the answer icon. “Dak Williams.”

“Dak, any plans for Christmas?”

“Eh... I’m going to...” He’d been about to tell Tom that he was spending the holidays with his family but decided not to. “Why? What’s up?”

“Any chance you’re free for an urgent role?”

“In a movie?” Dak could hardly believe that they’d be shooting over Christmas. Then again, Hollywood was weird in so many ways.

“You’d have to be available tonight. Starts at midnight. Pays five-thousand.”

That gave Dak pause for thought. He’d pretty much given up on becoming a famous movie star—or even gain just a little bit of fame—and had decided to go back to what he’d studied for. To become a doctor. After two years of residency, he’d left the hospital to follow his dream. His decision had also cut off the trust his dear departed grandfather had set up to help him during his studies. The trust was still there and available, but the trustees would only release the funds again if he resumed his medical career.

“Dak, are you still there?”

For a moment, he was speechless. “Five-thousand? Are you serious?” This offer was so unexpected and out of the blue. The most he’d been paid for small parts was a thousand or less. They were usually one-liners, and sometimes he didn’t even have to open his mouth.

“Yes, for twenty-four hours of work. You’re perfect for the role. Interested?”

His mom would surely lop off his head... But five grand? A lot of money for a small role. That would pay off some of his debts and help him get started again. His apartment hadn’t been rented yet. He could pay his overdue rent and keep the place and not have to move in with his mother.

Relief flooded him. Tom would take his cut, but there’d still be plenty left over. It was too good to be true. “What kind of role? What’s the movie?”

“Why don’t you dash over to my office. Try and be here in ten minutes. We’ll talk then. Gotta go.”

Twenty-four hours starting midnight. He would miss Christmas Eve, all of Christmas Day, and Christmas dinner. His mother would never forgive him. It would be the first time he’d not shown up for the holidays. What excuse could he give? His car broke down? No, there was always the bus. Sick? He had talked to his mother that morning and told her he would be on his way late afternoon.

Conflicted, he went to the bathroom. He relieved himself, then stood before the mirror and gazed at his reflection. “You can do this, Dak. You never know. It could finally be the beginning of your career as an actor.”

A tiny flame of hope ignited in his heart, although his wish to become the surgeon he’d always wanted to be still hovered there, too. “Stop it. It’s only a small part, just like the others you’ve done. Stick to your guns.”

He ran his fingers through his shoulder-length platinum blond hair, wondered if he should shave, but shrugged. He could do that later.

He didn’t have to leave the apartment until the end of the month, so he left his duffel bag and laptop there, grabbed his backpack, locked up, and hurried to his car.