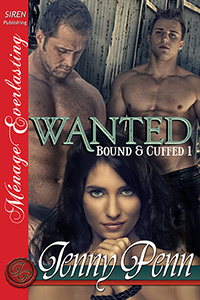 “Are you sure about this?” Because Janie wasn’t. In fact, she was beginning to have more than a few doubts. Her mother, however, didn’t even pause her knitting or bother to look up as she answered without hesitation.

“But…bodyguards?” Janie couldn’t even believe she needed them. What had her life become?

“Yes, honey.” Helena placed her knitting back into her basket of yarn as a heavy knock echoed through the house.

Almost instantly Bennie was bouncing around and yapping as he rushed toward the door. His tail wagged in a frantic beat as his little paws began to pelt the door with an excited greeting that would end up with him peeing on the floor if her mother didn’t get the door open fast enough. Helena prevented disaster by scooping Bennie up and reaching for the knob. The tiny little hound squirmed in her arms, desperate to get free and lick the men standing on the other side.

Janie followed her mother as far as the entrance to the parlor and watched as Helena offered the two scary-looking men darkening her doorstep a big smile. Janie couldn’t find one herself. Her stomach was in knots, her heart racing, her palms sweating, and that was before she got a close-up look at her new bodyguards.

Their size was emphasized by the tight fit of their nearly all black attire, though the first one to step forward was a might bit smaller than the man who hung toward the back. Despite the tattoos revealed by the short sleeves of his T-shirt, the man who greeted her mother wore a smile accompanied by a set of dimples that made his chiseled features look less hard and unforgiving.

“Good morning.” Smooth as velvet, his voice purred out like a sensual stroke that had the quivers in stomach churning into full-on tremors. “I’m Tex Holmes, and you must be the lovely Janie Scott. I must say, ma’am, I can see why a man might become infatuated with you.”

It was such a blatant line, but Janie’s mom giggled and blushed as she broke into a wide smile. “Oh, you sweet boy. I’m going to thank you for your compliment, but as I’m sure you know, I’m Helena, Janie’s mom. That’s my daughter.”

Her mother pointed Bennie at Janie, causing the big man’s dark gaze to shift toward her. His eyes narrowed slightly as they swept down her length, leaving a heated trail of awareness in their wake. Janie could feel herself warming under his look and tried desperately to mask her instinctive response to the handsome man by shifting her gaze to his partner.

Bigger, meaner, and definitely more dangerous looking, the large man lingering behind Tex was every bit as good looking as his partner. He was also the polar opposite. Where Tex had a head full of chocolate brown hair that glistened in the sun, his backup buddy’s skull gleamed in the light, smooth as baby’s bottom. The only hair growing on his head was the goatee that emphasized the hard line of his wide, square-cut jaw and the broad, masculine features of his face.

He looked like a walking destroyer and scared Janie about as much as he excited her. This was not her kind of man. Neither of them was. No, they were the type of men Janie had only ever read about in the romance novels she devoured in mass quantities. Both men looked like they’d walked off one of the covers, sending Janie’s hormones surging with a wicked, wanton need.

And he was so full of shit. Janie wasn’t blind to the truth. She owned mirrors and knew that her reflection was anything but beautiful. At best, she could be described as mousy. At worse, she she’d been called plain, which made her current situation all the more deranged.

Helena smiled as she stepped backward to allow both men to finally enter the hall and fill the small room with their heat and bulk. Instantly, Janie felt overwhelmed by their presence and couldn’t control the urge to retreat back into the parlor. Hidden from view, she took a moment to catch her breath, even as she listened to the deep baritone of Tex’s partner as he introduced himself.

Had his parents really named him that? Janie doubted it, even if it the title did fit his appearance as he sauntered into the room behind her beaming mother. She wasn’t the only one looking excited. Bennie appeared ready to wet himself if her mom didn’t release him soon. He’d do it, too. Her mother knew it, which probably explained why she dropped the miniature mutt onto the floor and allowed him to rush back to greet both Tex and Brick.

“Cute dog,” Tex commented as he smiled down at the small shaggy mess trying to lick his big, black boots clean. “Young?”

“Not nearly,” Helena laughed as she took a seat in her rocker and gestured for both men to claim the couch. “He’s about eight, now, but I’m afraid to tell him that. Bennie still thinks he’s a puppy.”

“Bennie?” Tex lifted a brow at that as he took the offered seat.

Brick, on the other hand, reached down to scoop Bennie up in one massive hand and lift the squirming pooch up to eye level. The small mutt tried desperately to stretch far enough forward to give him a kiss, and damn if the big man didn’t let him. That was a mistake.

“Bennie!” Her mom gasped, hopping out of her seat as a stream of urine came running down Brick’s hand. “Oh, my God, I’m so, so sorry.”

For his part, Brick didn’t say a word. He just stood there stoically while Bennie peed on him. It was almost funny, though Janie knew her mother didn’t agree. Janie bowed her head to hide her smile as her mother quickly snatched Bennie back and led Brick out of the room to get cleaned up, leaving Janie alone with Tex.

He shared her smile, making hers fade away as she felt a sudden tension grip her muscles. Tex really did look like a naughty rascal when he grinned, and she could feel her heart begin to race again as the silence stretched out between them. There was something in the air, something that made her ache to fidget, and she gripped her hands tightly together, trying to control that impulse.

“So…” Tex finally broke the awkwardness that seemed to grip the room. “You got yourself a psycho ex, huh?”

Janie didn’t have time to think, to worry, to gather a single thought before her body was flushing hot with the bright bloom of rapture. She came in a rush of glorious pleasure that seared through her with such force her whole body arched upward into the mouth driving her insane. This wasn’t the slow exploration of Brick’s kisses but the ravenous devouring of Tex’s hunger.

There was no stopping him, not that Janie wanted to.

Lost in the moment, she writhed beneath his tongue as he lapped at her clit, driving her straight toward a release that had her crying out. He took no mercy on her and offered her not even a second of respite as his fingers pumped deep into her spasming sheath, fucking her with a rapid motion that had her climax imploding into a seething caldron of delight that threatened to boil over and burn away what little sanity Janie had left.

All Janie knew was that she wanted, needed, more. She was desperate for it, mindless to all other considerations but the lust driving her to beg and plead for something she couldn’t even identify. The words fell in broken gasps from her lips.

It didn’t matter that she didn’t know what she was asking for. Tex knew. He rose up above her, abandoning her molten flesh to gaze down at her with a look so dark and intense it all but stole Janie’s breath. She could feel the thick, bulbous head of his cock come to rest against the weeping entrance of her cunt, but he held back to snarl down at her.

Janie blinked, a fizzle of fear rushing through her at that bold claim, but there was no time to deny him as Tex fisted a hand in her hair and tilted her head back.

Janie swallowed, the words quivering on her lips as her mind flashed to Brick in that moment.

“I’m yours,” Janie whispered out but wasn’t able to deny the truth or lie to him in that moment. “And Brick’s.”

Tex grunted at that, accepting her words with a thrust of his hips that buried the full, thick length of his cock deep inside of her. Janie’s eyes widened at the feel of him. He was bigger than any man she’d ever taken before. Bigger and longer, he touched her in ways that ignited a frenzy of delicious delight that had her twisting beneath him.

Tex smiled, a wicked curl of his lips that matched the equally feral glint in his gaze. Janie knew she was in trouble in that moment, but there was nothing she could do. She was bound to the bed and completely at Tex’s mercy. He had none, showed none, as he began to fuck her with a fast-paced rhythm that set every nerve ending in her body on fire.

Janie felt as if she was burning up from the inside out. Every pull and push of Tex’s hard dick ignited a new tremor of pleasure that raced up her spine until the bolts of delight came fast and hard, leaving her awash in a rapture so pure there was nothing that could compare. Nothing but the release that exploded through her as the thick knob of his head pumped against the magical spot buried deep inside of her.