Accepting Submission by Kris T. Bethke: When Asher loses the ability to shift into his bear, he heads to a wolf pack with the hopes that Alpha Trey can give him what he needs. Asher gets even more than he bargained for with Trey as a Dom and lover, and a pack who accepts a damaged bear. Now Asher just needs to accept himself to have a life he deserves to live.

Gym Slave by Gordon Phillips: Marc joins a new gym to expand his personal experiences, but finds these and more in a back-lot encounter from which he is rescued by Anatole, a gym staff member. In a journey of captivity and degradation, Marc discovers disturbing aspects of his own nature and must choose between ordinary life and that of a "Sub" in a relationship that challenges his deepest values but feeds his deepest passions.

Leather and Tea in London by K.L. Noone: Retired secret agent Ben will do anything for his husband. So when Simon's brother needs help, Ben and Simon head to London. But this new mission only reminds Ben of his past. Simon wants to help Stephen, but being back home stirs up ugly memories for him, too. In London, Ben and Simon will face the past and find comfort in each other ... with some leather and tea. 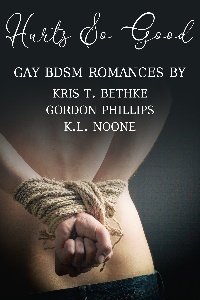 "I felt something, when I was here. Being in your presence. I felt --" the words stuttered out, and then I just let it out, because I needed to. I'd been fighting it so damn long, and I was so damn tired of it. "The things I want ... I shouldn't want them. It's not right. But I do. I want them. And you could give them to me. I felt it that day and I've been thinking about it since. And gods, it's so wrong but I know you could give them to me."

A beat of silence, and when Trey spoke, it was a rumble of sound. "What things?"

"Maybe I do," and that rumble became gentler, understanding. But no less powerful. "But you need to say it."

"I want to submit," I whispered, my voice shaking.

"Need," I whimpered, because gods, yes. I needed it. It was more than just want. And it didn't matter who wrong it was, I needed it.

Two words. That's all they were. And not even particularly important ones at that. But they filled me up, that little bit of praise and I sagged. Trey's hold on my neck the only thing that kept me from crumbling into a heap.

He touched my cheek with his free hand, and brought my face around to his. I squeezed my eyes closed, not able to look at him, despite the warmth his praise had given me. Trey wasn't having that though. He gave me a little shake, and I snapped my eyes open. What I saw nearly undid me. The warmth in his gaze, but also the heat. But most of all, it was the pride.

"It takes the strongest person to admit what they need. Especially when it comes to this. I'm so proud of you for saying it, for coming here where you knew I would help you. I'm proud of you, cub."

I lost it. I'd never been prone to hysterics -- because I couldn't allow that much emotion to show through -- but his words broke me. And then Trey did the most amazing thing. Instead of turning away, instead of kicking me out, he gathered me in those strong arms and held me tightly while I cried.